Preview – The Guns of American Sniper 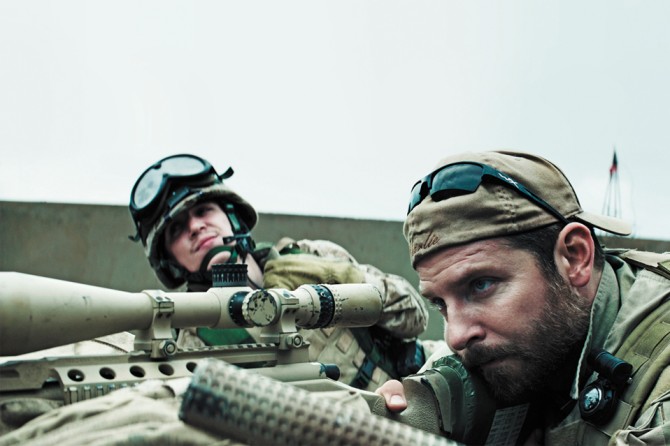 A Look Behind the Scenes

Navy SEAL Chief Chris Kyle is now a household name. He served this great country with distinction, having earned two Silver Stars, five Bronze Stars with Valor, two Navy and Marine Corps Achievement Medals, and one Navy and Marine Corps Commendation for his bravery over four combat tours. He’s renowned for being the most lethal sniper in U.S. military history, with 160 official confirmed kills. But that alone doesn’t and shouldn’t define him and his legacy.

Indeed, Oscar-winning director and all-around badass Clint Eastwood’s film American Sniper — and actor Bradley Cooper — pay tribute to Kyle…not just for his service, dedication, and bravery, but for his and his family’s sacrifices. And the film shines a bright light on the brotherhood of warriors and what all service members, veterans, and their families endure to help keep the United States strong and free.

Despite the protestations of certain misguided gelatinous mouth breathers whose names shall not defile these pages, American Sniper is breaking records at the box office and racked up six Academy Award nominations and one win. The movie is clearly striking a chord with American audiences, who are responding to the story and the message. While the film takes artistic license and is clearly not entirely historically accurate, don’t lose sight of the fact that this is a blockbuster movie bringing a valuable message to the masses — one that you rarely see coming out of Hollywood. We can all agree that is a good thing.

And it certainly does feel authentic, despite technical mishaps here and there in the final product. To this end, there were scores of people behind the scenes, working tirelessly to ensure as much authenticity as possible — naturally, we’re focused on those tasked with providing the distinctive weapons featured in the film.

A Peek Behind The Curtain
Thanks to our friends at Independent Studio Services (ISS), we bring you an exclusive behind the scenes look at the guns of American Sniper. ISS is a full-service prop house, serving the entertainment industry for nearly four decades. One of their specialties is weapons, and they’ve provided guns to Eastwood and his propmaster, Mike Sexton, for numerous films over the years.

Eastwood took the helm of American Sniper in the fall of 2013, and soon thereafter Karl Weschta, general manager of ISS’s armory, began discussing the film with Sexton. Planning for an aggressive filming schedule was already underway, but all the pieces were not yet in place. Despite uncertainty as to whether the production would proceed, ISS couldn’t wait to get started building guns if they had any hope of hitting deadlines (exacerbated by the need to work with the State Department to transport guns to sets in Morocco). ISS owner Gregg Bilson green-lit the investment, and they were off to the races, even without a script in hand.

Especially with Kyle’s tragic death earlier that year, everyone involved was keen to get everything exactly right and do it justice. It was tricky to piece together gear in use in from almost 10 years ago. Companies and folks from throughout the industry came together to make it happen: DD Ross, Remington, Dakota Arms, McMillan, Knight’s Armament Company, Leupold, Nightforce, Turner Saddlery, Black Hills Ammo, McCann Industries, Douglas Barrels, Rock Creek, Harris, HS Precision, GA Precision, FLIR, LMT, EO Tech, James Dever, Kevin Lacz (technical advisor and fellow SEAL Team 3 member who plays Dauber in the film), and many others. The rifles are all real firearms, the suppressors are dummy units, and the pistols are firearms that have been carefully modified to fire blanks. In the preparation of this article, we also received additional input from Chief Monty LeClair, an active duty Navy SEAL with two decades in special operations and at Naval Special Warfare Command (NSW), who personally built some rifles for Kyle and who owns Centurion Arms. 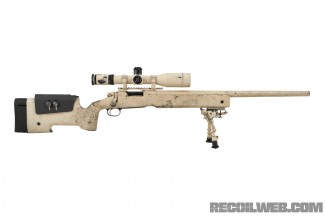 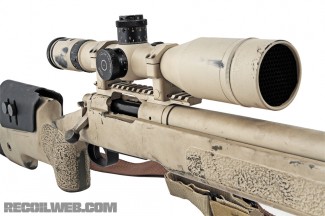 M40A3 rifles are utilized by Marine scout snipers in the movie, topped with Unertl 10x scopes in early scenes (production had one real and one dummy unit) and Schmidt & Bender M8541 scopes in later scenes. These rifles were built to issue specs using contract parts by Dan Ross. During Kyle’s training scenes, you see him behind an M40A1, which was actually a painted Model 700 PSS. This example of a US Army M24 fills the screen in the hands of a Special Forces operator on the rooftop in the last battle scene. It was built by ISS gunsmith Scott Fritschler to replicate the issued weapons. 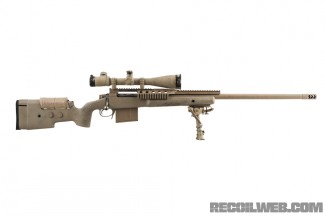 Kyle’s McMillan TAC-338 rifle figures prominently in the climactic faceoff with Mustafa in the fourth tour. It was built by McMillan Firearms, with a lot of help from Gerald Hills and Dave Arnberger, to exactly match the rifle they built for Kyle, an earlier variant of their current model. For the movie, McMillan built this gun as well as stocks for other rifles. Unlike the other rifles, it did not have a suppressor fitted. The TAC-338 was not a standard-issue weapon, and there was some debate over whether Kyle used a Leupold or Nightforce optic (both were in service with the SEAL teams). Kyle had a Leupold on the cover of his book and in his publicity shots, so that sealed the deal. 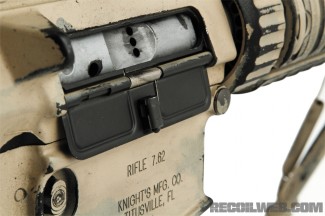 Kyle wields the Knight’s Armament Company SR-25 during the latter part of Tour 1, removing the suppressor for house clearing. Trey Knight and his team at KAC built a pair of these rifles for the movie, both with authentic Mk 11 markings (the second was used by Dauber, played by Kevin Lacz, and other troops in the film). There are reportedly approximately 100 Mk 11 rifles in civilian hands that are collector pieces, trading at tens of thousands of dollars. As a side note, ISS acquired about 60 sets of KAC rail systems to accurately depict the USMC M16s in the film. 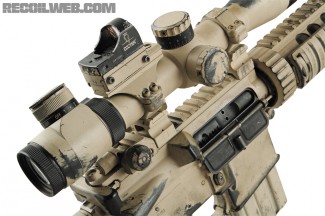 Kyle uses the Mk 12 special purpose rifle (less its secondary red-dot sight) in a sniper training scene. Alan Brown, who also built rifles for NSW, and High Caliber Sales built six of them for Lone Survivor. It’s interesting to note that NSW Crane delivered all Mk 12 rifles to the SEAL teams with rifle-length receiver extensions, typically with A1 fixed stocks. The reason is that they wouldn’t run reliably in full auto with a carbine-length system. However, the end users didn’t care about full auto on these rifles, so they would often retrofit them with collapsible stocks (such as the LMT SOPMOD shown here). Some would even install semi-auto selectors as well to lock out full-auto mode.

One response to “Preview – The Guns of American Sniper”