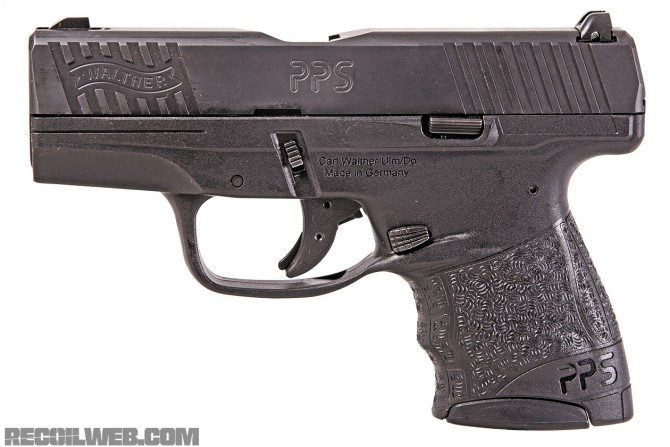 So How Does it Compare to the Shield and G43? We Were Pleasantly Surprised.

Walther’s PPS was introduced to the American market in 2007, and despite being a creditable design, never got the kind of attention it deserved. Once the Smith & Wesson Shield hit the shelves, followed by the fast-becoming-ubiquitous G43, it became about as noticeable as a middle child with braces. Which is a pity, as it’s actually pretty damn good.

Responding to the market’s lack of empathy for the design, Walther relaunched the PPS as the M2 version in January, making a number of changes calculated to endear it to U.S. shooters. Gone is the Euro paddle mag release, replaced by an apple pie button at the rear of the trigger guard. The frame got smoothed out and rounded, losing some of the original’s Teutonic blockiness, and its trigger mechanism was simplified, dropping the pull weight and creating a more user-friendly result.

So much for the difference between the new model and the old. What we all want to know is, how does it stack up against the competition? Read on and find out. Single-Stack Shootout
Bottom line up front: Compared to the Shield and baby Glock, the PPS is a very creditable contender. All three hew closely to the theme currently in vogue as the modern evolution of the carry gun — a polymer-framed, striker-fired, single-stack 9mm. As such, they offer a (barely) adequate magazine capacity, teamed with an adequate cartridge. Balancing this duopoly of mediocrity is their ability to be carried discretely and comfortably, and with over 12 million Americans licensed to do just that, it’s no surprise that this is the hottest market segment in the handgun universe right now. Due to their limited onboard ammo, it’s doubly important that the projectiles available to the shooter actually land where they’re supposed to, so decent sights and a good trigger rank only slightly lower in importance than reliability.

Out of the box, the PPS M2 has the best trigger of the three, breaking at a predictable and consistent 6.5 pounds with minimal overtravel and around a ¼-inch reset. In function, it’s almost identical to the Austrian offering, using a cruciform trigger bar to fully cock and then release a partially pre-cocked striker, meaning that a five-minute fluff and buff should yield similar payoffs in terms of feel and weight reduction.

The trigger itself is plastic, with the now-familiar gas pedal safety in its face. Our moles at Apex indicate that since the original, complex mechanism has been simplified to the point that any improved parts could be simply dropped in by the user, they’ll be taking a keen interest in the new version. Expect aftermarket parts to show up in the not too distant future.

Sights are industry-standard three-dot affairs. The front sight measures 0.145 inch wide, and there’s plenty of light on either side of the 0.180-inch-wide rear sight notch. Although the rear is melted and angled rearward, it still works to hook your belt or heel, should you be unfortunate enough to need it for one-handed manipulation. Both front and rear sight are user replaceable, and Walther offers different height combinations in case your chosen ammo doesn’t print where you’d like it to.