The Veep Says to Buy a Shotgun
OK, Roger That. The XRAIL Is a High-Speed Rail System You Can Really Vote For.

We have to start by saying that the XM2XI Integrated XRAIL System is more fun than a barrel of monkeys… all of whom, by the way, you could totally shoot without needing to reload if you had an XRAIL system. Not that you would ever do such a thing. Remember, according to the movies, some day they’ll rise up against us.

Let’s be honest, it’s a blast to make things go boom, and shotguns are exceptionally good at that task. But one of the least fun things about running a shotgun is loading it, especially in three-gun competitions with high round counts in which you’re expected to run around engaging a bunch of targets as quickly and accurately as you can — and there are usually more targets than you have shells in your scattergun. Mark Roth got bitten by the three-gun bug about seven years ago and became obsessed with increasing his shotgun’s capacity. He formed Roth Concept Innovations, and his concept of multiple magazine tubes that automatically rotate into place came to life first as a bolt-on accessory for existing shotgun platforms. But it is the integrated XRAIL built on the Benelli M2 semi-auto shotgun that represents the ultimate evolution of his concept.

Necessity Is the Mother of Invention
Typical semi-automatic shotguns are fed from a tubular magazine that extends forth from the receiver, underneath the barrel. Shotshells are held at the ready, stacked one after another in the tube, with a long magazine spring serving them up when the action cycles.

Three-gun competitors have attached progressively longer magazine extensions onto their shotguns to the point that they can double as javelins — and yet still only hold perhaps 12 rounds of 2¾-inch shells before it starts getting really absurd. In Open Division, shooters can configure their shotguns however they wish, and for years Open shooters would use tubular speedloaders to shove four or more shells at a time into a chute leading into the magazine tube. The lightbulb in Roth’s head was to affix a set of spring-loaded magazine tubes that would rotate into place as each was emptied, like a wicked revolver with tubes full of snarling 12-gauge shells. 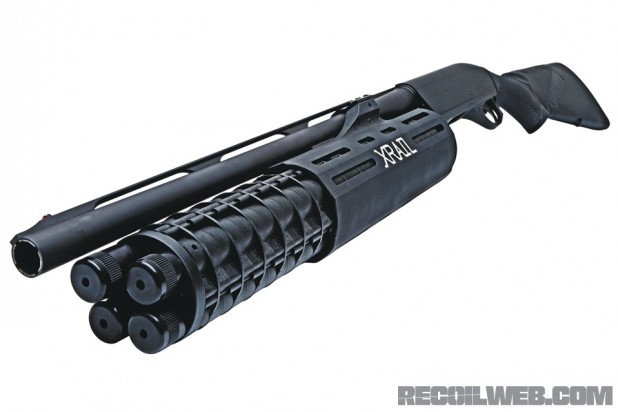