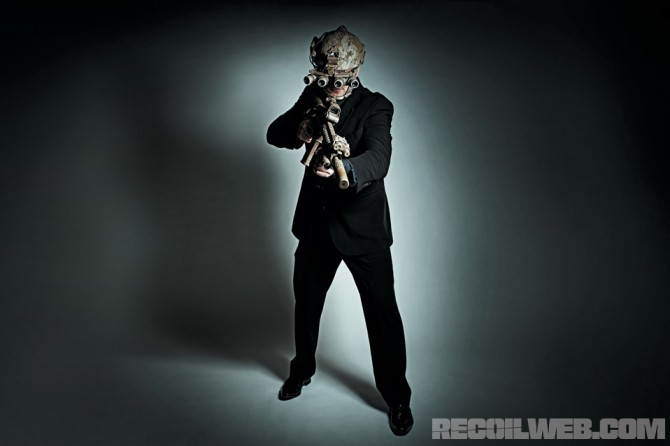 The beginning of the New Year starts off differently for many folks. Some make resolutions, perhaps some find a higher meaning to life, and some may just treat the New Year as the start of another month. If you are in the firearms, outdoor, hunting, or shooting industry you finalize your plans to attend the Shooting, Hunting, Outdoor Trade (SHOT) Show in Las Vegas. It’s a Mecca of sorts in Sin City that brings many parts of the industry together under one roof, and the people who attend usually look for the newest unveilings from their favorite companies.

Meetings from sun-up to sun-down and beyond are the norm, with people scurrying from meeting to meeting. A lot of business is conducted at this show — introductions are made that can last a lifetime, and eyes are opened to things previously unseen. SHOT 2015 was no different, but one meeting warranted a little more preparation than the others. We took the opportunity to sit down with Mark Owen, the pseudonym of the author of No Easy Day and the recently released No Hero, currently on the New York Times bestseller list.

Perhaps a fair number of you have seen his interviews on 60 Minutes or read one or both of his books. Upon sitting down with Mark, you soon realize he’s a very easy person to talk to, with no time for BS. He likes to laugh and is genuine with his conviction and words. There’s a very perceptible level of intensity too, as you’d expect from a man driven to excel at everything he’s done, from his childhood in the backwoods of Alaska to charging up the stairs in bin Laden’s Abbottabad compound. Speaking with Mark about his time leading up to joining the Navy gives you the sense that he enjoys talking about his enlistment — perhaps trying to convey to others who may hear or read his words that they might find the drive within themselves to take the steps he took and never give up on their hopes and dreams. Entering the United States Navy to become a SEAL is a dream shared by many, but realized by few. The training that candidates go through while attending the Basic Underwater Demolition/Seal (BUD/S) course is brutal, cold, and miserable, challenging all who take their first step onto the Navy base in Coronado, California.

After five years, Mark made selection for the fabled SEAL Team 6, also known as DEVGRU. Stress and pressure seemed to be the norm back at Dam Neck, the Fleet Training Center in Virginia Beach — a perfect environment to bring out the best in Mark. If he made a mistake during training, he was not only disappointed in himself, but that he had let the instructors down. The instructors would look at you like your dad might if you had disappointed him while growing up.

Entering Dam Neck as an E-5, Mark did not make his first promotion to Chief, but succeeded the second time around. During his time at DEVGRU, he was promoted three times and left the US Navy as an E-8. With rank came more responsibilities, and moving up to the team leader position was something that he enjoyed. Working with a group of guys who were all senior personnel seemed to make it more manageable, as they were all at the Command for one fight. RECOIL: Some of the books you read growing up got you to focus on wanting to become a SEAL. What titles did you read?

Mark Owen: The one that I remember was Men With Green Faces. I met the author, and we got to exchange books — that was a really cool moment in my life. I was in junior high when I read these books, and I didn’t just read SEAL books. I read all the SOF books, the LRRP books; there just seemed to be a ton of them out there. Everybody has read Rogue Warrior.

Did you finish BUD/S and go straight to SEAL Team 5?

MO: I had already been to jump school in college at ROTC, so after BUD/S, I didn’t go to jump school with my class. I went right to Team 5 and started what was called SEAL Tactical Training, five more months of training. After that, I went right into a platoon at Team 5, did the Trident boards, had my cool-off period, got my Trident, and started training up with them. Did a deployment to Japan, then September 11 happened. I came back and did another train-up. In my second platoon, we deployed to Iraq.

How about transition to being a civilian? What was it like driving out of the compound your last time?

MO: Scary as shit. Sunny day, I never thought I’d get out. Remember, I told myself at the 10-year mark that I would look at myself and make the decision. If you went over 10, why would you get out at 14 or 15? May as well stay in for 20 to get your pension. But — my first deployment, September 11 happens; the last thing I did was the [bin Laden] raid. Seemed like good bookends.

Let’s talk about the rifle you’re holding on the cover of this issue of RECOIL. You shot a piston gun at DEVGRU, and you’ve got a DI gun here.

MO: I’ve run gas and piston. I had a Colt gun for years, had no issues with it — suppressed, unsuppressed, dirty. Got the 416s, loved them. Loved my 416; I have an MR556. However, when it came to the No Easy Day gun, we wanted to keep the price point down. Seventy Calibers in a Can: The Liberty Cosmic
Prism Scope Versatility: The Battlefield and Beyond
How to Cerakote — Like Building a Model Airplane, But it Lasts a Lot Longer
Sentinel Concepts releases a new low light vehicle CQB video