Protean Innovations Stability XT Review: Speedy, if you’re up for it. In the world of stabilized shooting, the bipod reigns supreme. Most solutions are modular, light-weight, and fairly easy to deploy. Since Harris launched their bipod nearly 40 years ago, multiple new options have risen to prominence such as the B&T Atlas, Magpul rifle bipod, the MDT Ckye-Pod, and several others. The base concept is rather simple: a two-legged stabilizing platform for small arms used to shoot from the ground, a bench, or other obstacles more accurately. It seems that each company has a feature their bipod is known for. For Magpul it’s weight and price savings, for Harris, it’s quick deploy spring-loaded legs and feet, for B&T, it’s bomb-proof ruggedness. Is there room for more innovation in the marketplace? Protean Innovations seems to think there is with their Stability XT as the latest feature-packed bipod to hit the market.

Recently we’ve had the opportunity to work with the Protean Innovations Stability XT and compare it to some of the other bipods on the market such as the Atlas BT10 and a customized Harris BRM-S. For the sake of transparency, throughout this review we will make comparisons to other bipods we’ve worked with in the past. Most of what is written here can be found on the product page. The Protean Stability XT weighs in at 15.2oz and has a retracted vertical leg height of 7” and an extended height of 10” with quarter inch adjustments. The legs can be easily adjusted from 0° (stowed) to 25°, 45°, 60°, 75°, and 90° (vertical). The bipod attaches to a standard 1913 picatinny rail segment and is made of 6061-t6 aluminum. Protean offers a sort-of A2 style grip that can be affixed to the bipod to aid articulating the bipod legs, but we found it added too much bulk on the bottom of an average rifle, and would be a red flag if affixed when on a bolt action pistol like the new Remington 700 CP. 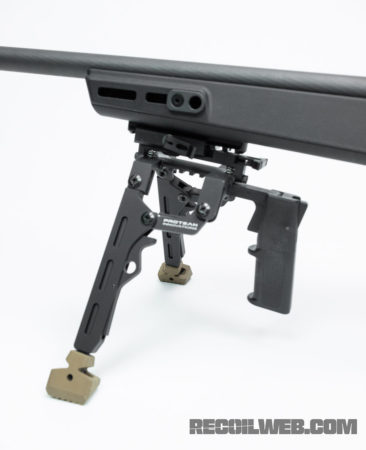 This bipod has one of the quickest deploy times on the market, if not the fastest. This is accomplished by a sliding and locking action controlled by a small handle and trigger on the rear of the bipod. This allows the shooter to deploy the bipod at a desired angle quickly and with a single hand making standing-to-prone transitions and running the rifle in and out of barricades a snap. Many PRS shooters simply ditch the bipod when threading the rifle through tight obstacles, because stowing the legs of a bipod can cost valuable time. Not the case with the Protean Stability XT. Simply depress the trigger and push the handle at the rear of the bipod forward, and you’ve got a clean and low-profile package. It’s also easy to pan the bipod to the left or the right with a quick unlocking switch.

As previously mentioned, the bipod is intended to be stowed with ease; however, in timed drills we often found ourselves fighting the bipod. It would often not want to stow and instead slide back to the 25° position unless we slammed it forward with a good deal of force. Over time, whether through practice or as the metal-on-metal parts began to wear into each other, success in rapidly stowing became more consistent. Since then, Protean Innovations has addressed this issue by offering a spring enhancement if you contact them.

The way the bipod mounts to a rail segments seems problematic. Not just any 1913 rail will do. A low profile Arisaka rail was too large dimensionally, while a Magpul polymer MOE rail segment was too loose. The fitting is cut to fit only in-spec rail segments, something many have strayed from one way or another. Protean Innovation offers Keymod and M-Lok rail segments but for the steep price of $34.99 each. These additional rail pieces can also be too long for the job they are intended for. As an example, the KRG whiskey enclosed forend has two M-Lok slots separated by a QD sling swivel mounting point. The Protean rail requires 3 consecutive M-Lok slots. It would be better to make a rail segment as long as the actual bipod mount, spanning no more than 2 slots. As for the mount itself, there is no way to tighten or loosen the bipod on the rail, so there’s a good chance you’ll either have a hard time removing the bipod or have a loose and rattly 15oz weight at the end of your rifle. An adjustable QD mount would fix this issue easily or so would a mount foot pattern similar to the Atlas or Magpul bipod for the end-user to choose their favorite QD company. But then you're dealing in patent country.

The pan feature is very smooth- but that just might be the problem: it feels too smooth. There is no resistance in moving left to right, and this makes it very easy to overshoot a target. The cant on the Protean Stability XT is non-adjustable, or at least, not easily adjusted unless you want to carry an allen key in the field with you. Cant is adjusted by two fine hex-head screws on the front and the back of the bipod. It would be nice to have the ability to adjust or lock off the cant entirely like Atlas, Magpul, and Harris S series bipods. There’s no getting around the fact that this is a heavy accessory to have at the end of a likely heavy rifle already. It’s between one and six ounces heavier than competing bipods. SENDING OFF the PROTEAN STABILITY XT

So who is this bipod for?  We could see PRS shooters benefiting from the incredibly quick deploying and stowing legs. As for military use, the pan feature could be incredibly useful for overwatch roles and should seriously be considered as the the perfect replacement for the nightmare-inducing, thumb-gouging horror show found on M249 SAWs, MK46s, or M240Bs around the world. Hunters might find this bipod a bit heavy and instead could consider the Magpul or Harris bipods, though if set up right, it dominates the fast-deployment for first-shot time. Last but not least, this bipod alone will run you about 369 greenbacks, which puts it between the Atlas series of bipods and Ckrye-Pod. This might put the Protean Stability XT outside of the budget for many shooters.

We ended up having mixed impressions that ironed out over time with the Protean Stability XT as it has a great deal of potential and some features that really stand out. Once we got the hang of stowing the bipod it ended up being incredibly fast to operate. We adjusted the cant to where we could easily level the rifle but not have it get squirrely under recoil, and then used threadlocker on those adjustment screws. However, for this price point we would have expected some features such as a tilt/cant lock and a mounting system that didn’t leave us wanting. Another feature we would have liked to see is an option to have spiked feet, as this has become an industry standard, though our senses suggest something is in the works already. All in all, this niche bipod comes with a few quirks to work around, but brings speed to the table in pounds.

For More on Bipods, check out these articles: