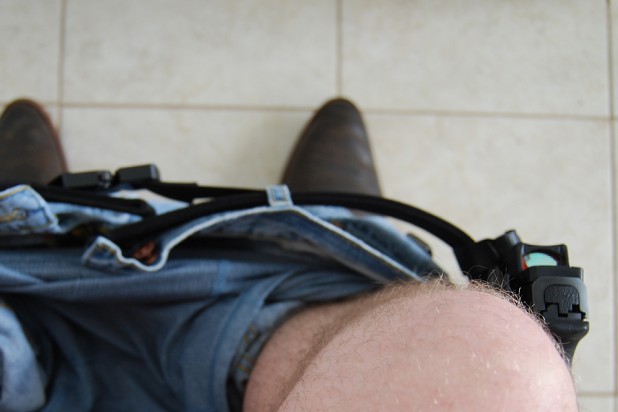 Weapon storage during that moment of vulnerability: Public bathroom breaks and your EDC. It may sound counter-intuitive and you can bet there will be many who decry the need for such effort — but more than one squared away person has done something stupid. Here's a way to avoid the mistake so many guys make and so few admit to.

There is a topic that comes up quite often among those who carry a pistol every day, or are training to do, but it only rarely presents itself in an open forum. It is more of an after-hour or after-class “Hey, got a minute?“ scenario. I thought this would be a good time and opportunity to propose the question in an open format and get guys thinking on how to safely keep positive control of your handgun while taking that needed break away from your personal porcelain. This topic is frequently broached thusly:

“What do you do with your handgun in a public bathroom during, you know, a … sit down session?”

For the last few decades, I have had a gun on me in nearly every public scenario I can think of and in all sorts of clothing situations, from undercover mode to full SWAT kit. Now since my retirement, I fit in with the rest of the populace with everyday carry, and always concealed.

No matter the venue, if you forget your heater in a public bathroom and aren't lucky enough to remember quickly and retrieve it, you can guarantee that there will be a seemingly unending series of problems. These will run the gamut of consequences. If the police are contacted, you may eventually get it back, but there is certainly possibility of criminal charges (weapon recovery and charges will depend on a lot of stuff) . The absolute worst case scenario of course is, finders, keepers. The latter then could result in any sort of tragedy, whether it is discovered by a curious child and they are injured or it ends up in the hands of someone taking criminal action later. Both will come back around to haunt you. As responsible armed individuals, we need to ensure the security of our firearm is addressed in all likely situations, even the ones rarely discussed in polite society.

So how do we keep track of the hollow point dispenser while taking a seat and doing that needed paperwork?

Over the years I have found that once the pants reach knee height, I can re-fasten my belt in a hasty fashion. Some belts lend themselves to this more readily than others and a QD buckle such as the one used (mine is an Ares Gear Enhanced Ranger) is easiest to for this. I then lower the rig the rest of the way as I come to rest in that final position. This method will keep the pistol upright and it never leaves the holster, so there is zero chance of it being left behind. I have found that you may have to keep your feet spread apart slightly depending on your belt and holster selection, but with this sort of carry setup it is a very effective way of keeping control of your handgun. Recently I have been carrying my M&P in a Raven Concealment Systems Vanguard II minimalist appendix holster. This offered a new problem in that the single quick mount strap would not retain the upright position, and of course it is carried in the appendix position. I have found the best solution with this concealed carry option to be unclipping the QMS strap and placing the gun in my pants crotch, with the VGII trigger guard still attached. There are a few reasons for this: I know where it is. There is zero chance I leave that bathroom and forget it. If I forget it for a second, I will quickly realize it once I pull up and catch it in the doo-dads … then I can simply snap up, reattach the VGII and buckle up. Tactically speaking, it is where I can still feasibly get to it should I need it in that vulnerable moment I am currently in, and the trigger is still covered. This method can also be used with a paddle or similar style holster that can be removed once the belt is unbuckled. The one pictured is an RCS Phantom LB with QMS Straps. 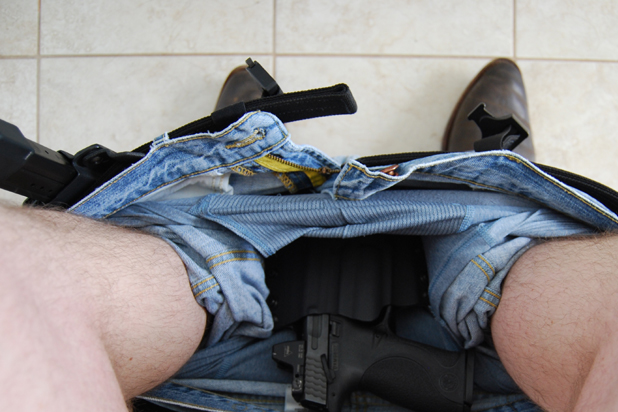 Your setup will drive how you can safely control your handgun in this scenario. But I leave you with this: Keeping it on you or attached to you will greatly reduce the chances of losing that handgun. Keeping it in the holster, whether attached to the belt or not, minimizes the risk of a negligent discharge.

About the author: Matt Jacques is the training director for Victory First Consulting. He recently left the service of the Department of State’s DSS (Diplomatic Security Service), where he was the Operations Chief for FTU (Firearms Training Unit) to begin teaching full time. A former Marine MP assigned to the Presidential Helicopter Squadron, he spent over a decade as police officer, undercover detective and SWAT team member before surviving a near-fatal injury inflicted by a wanted felon that forced an end to his LE career. Following his recovery, “Jake” spent two years as the Senior Manager for Weapons Integration and Training Operations with FNH USA, where he was involved in every aspect of the SCAR program as well as all development and training aspects of the M249, M240 and the FN SPR sniper rifle systems. You can follow Victory First Consulting on the web or via their Facebook page.

[Editor's note: Here are a few thoughts from Matt on the potential issues of a violent encounter while carrying concealed. I will provide more background in his next article, but this one speaks quite eloquently for itself. David Reeder]