We Make James Bond Proud with the Trailblazer LifeCard.

The LifeCard from Trailblazer Firearms doesn’t appear to be anything close to a gun at first glance. But there’s more to be seen here. While many would consider it a mere novelty (and there’s nothing wrong with that), we think there’s a place for the LifeCard for those who prefer a martini shaken, not stirred.

It started with a horrible television show. Now-imprisoned Will Hayden of Red Jacket Firearms made a horribly clumsy and awkward version of the prototype Magpul FMG9 (which in turn was inspired from other folding designs such as the ARES Stealth gun). To say Hayden’s horrible design sparked inspiration would be technically correct, but not for the usual reasons.

Sitting in a hotel room, Aaron Voigt shook his head in plain disgust, deciding to design the smallest possible gun he could make that could still fire .22LR, while also not being federally regulated.

While pen guns and the like have been around for a long time, they fall under the purview of the federal government and require a tax stamp as an Any Other Weapon (AOW). AOW is a catchall for many items, and anything that shoots that doesn’t immediately appear to be a firearm falls under this category.

Voigt doesn’t have a background in engineering. He was a construction worker by trade since the day he left high school, only detouring for a short stint in the military before returning. He even founded his own company, but when the 2008 housing crisis hit, he shuttered his doors and became a catastrophic insurance adjuster. This meant long days on the road, and a whole lot of awful television in hotel rooms. We’re sure being victim to horrible hotels is the only reason anyone watched that show in the first place.

After watching that abortion of an episode, Voigt took the hotel card key from his pocket and traced it on a piece of paper. This would be the baseline size, and indeed what ultimately became the LifeCard.

Voigt sketched and designed for more than a year. He built a rough draft from wood, and put it into SolidWorks. By the end of 2011 he had one functioning prototype, which he promptly put in his pocket and brought to SHOT Show in January 2012. Almost immediately, he had a deal with a current manufacturer, which fell through due to one of many panics where nothing aside from AR-15s were made. Another deal was struck with another company, which led to a couple more years of development. And that didn’t work out either — so Voigt said “screw it,” and decided to do it himself in early 2015. After nine months of waiting on the BATFE to ensure it wouldn’t be considered an AOW, plans for construction could finally begin. Tooling finally hit metal in 2017, and he’s been churning out the LifeCard ever since.

While the original functioning prototype included a folding blade, that feature wouldn’t be on production models; instead there’s a small storage container for three .22LR rounds. 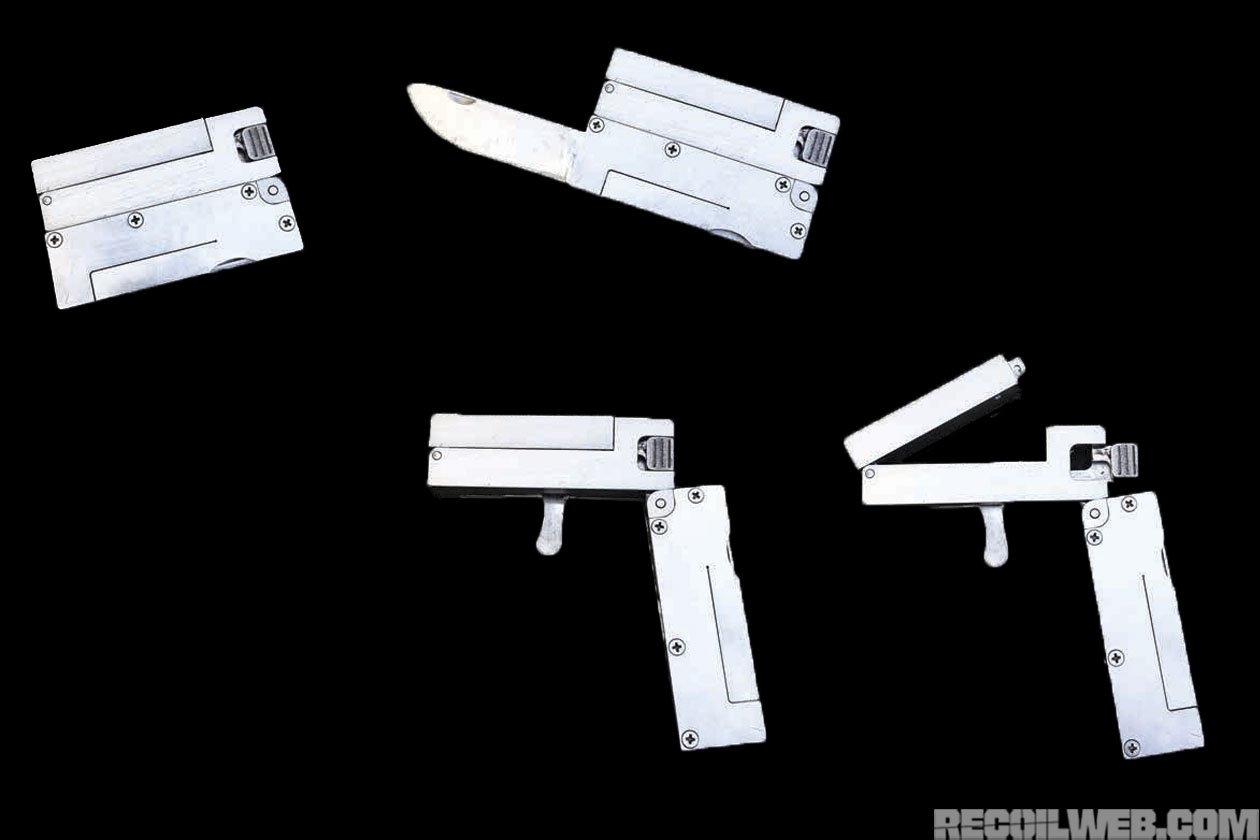 If you think unfolding a gun would be horrible for a self-defense handgun, let alone the fact it’s a single-shot .22LR, you’d be absolutely correct. However, the LifeCard was a pistol designed with size and concealment in mind over everything else. We’re as far as could be from advocating a .22LR, but the covert and murdery nature of the Trailblazer LifeCard really gets our hearts moving.

After the pistol is unfolded (it can be safely stored loaded), the hammer has to be cocked before the shot can be fired. After firing, you reload by hitting the barrel latch and manually extracting the spent casing before inserting a fresh round. This definitely isn’t a speedy affair. In order to re-fold the LifeCard after firing, the hammer has to be pulled back slightly to reset the trigger. We really appreciated that the LifeCard shipped with a snap-cap. Dry firing rimfire .22LR guns is particularly destructive, and the bright orange snap-cap allows for it without damaging the chamber face (you should see how mucked up our snap-cap got from dry firing).

The sights are a mere reminder that guns are supposed to have them, consisting of a shallow trench. But let’s be real, this isn’t meant for the target range. Accuracy is about what you’d expect, but accuracy isn’t what you need if you’re pointing it at contact range behind someone’s ear.

A while back we acquired a GSL Pill Box, a current version of the original clandestine .22LR Gemtech Pill Bottle. Can we call it a “version” if the original was made by Greg Latke of GSL? We digress; the GSL Pill Box is a simple, ingenious design. It consists of a single chamber with a single thick wipe to contain the blast.

Disguised as a pill bottle you carry on a keychain, a false top is removed to reveal ½x28mm threads. The normal cap is removable so it can behave as a regular pill bottle.

In fact, holding pills inside is an advantage — not only does it hide its true (quiet) nature, but some liquid-filled gel caplets act as an ablative. That is to say, burst upon firing and run the Pill Box wet. We first heard of fish oil pills used for this purpose but there are two downsides. First and foremost, most fish oil pills are simply too large to fit inside. When we purchased smaller fish oil pills for the same purpose, the entire silencer, guns, and our hands smelled like bad tuna fish for days.

Instead of fish oil pills, Gas-X pills are incredibly small, very inexpensive, and don’t make you smell like a cat food factory. Plus, we get a snicker out of using Gas-X pills to help quash the noise of gas expansion. The traditional host for this covert can would be a Beretta 21A Bobcat — but after watching too many James Bond films (Craig was the best, Brosnan was the worst), we wanted smaller.

The LifeCard caught our eye originally as a curiosity, but we realized it would be the perfect host for our Pill Box. The only trouble: There’s exactly zero exposed barrel to thread — so there was some engineering to do.

We got on the horn with Voigt and told him of our idea and plan. To get around the lack of a threaded barrel, Voigt decided internal threading in a proprietary pitch could be used to fit an external threaded adapter. This has been done to many firearms over the years, just never to a Trailblazer LifeCard. Soon enough, we received a revised LifeCard. Not everything was instantly awesome, though. The thread adapter provided by Trailblazer didn’t have any flats — meaning we were just as likely to unthread the adapter as we were the silencer. While in most instances we’d simply apply some Rocksett to make this problem disappear, we wanted to be able to easily remove the adapter for concealment purposes.

After some minor Dremel time, we had rudimentary flats on either side of the adapter, allowing for easy removal. A touch of black paint and it was like no one knew they weren’t there in the first place. So of course, we wanted to discover and engineer all sorts of ways to hide this gun and silencer combination. The silencer was the easy part — it’s already disguised as a functional keychain pill bottle. But the firearm and adapter took more work.

The LifeCard itself fits in an empty pack of cigarettes. However, smokes don’t weigh that much and don’t normally ding on metal detectors. This will get the LifeCard into some, but not all, places. Similarly, one could simply embed the LifeCard inside the sole of a steel-toed boot and not have any problems unless an X-ray machine was present.

We decided to go full Q from James Bond and engineer something from scratch. First, we gutted a portable battery pack and made a specific compartment for the LifeCard and thread adapter. Then, we went the extra mile to ensure the battery pack would still work by rewiring it to a single cell.

It’s still a functional external battery pack but with a surprise inside. Though it won’t evade X-ray machines (we have a version that does that too but won’t share it, because f*ck terrorists), it does provide plenty effective camouflage for most situations. Given the small size, and the fact that it’s a not instantly recognizable as a firearm, you could come up with a dozen different ways to carry this gun in places where you couldn’t otherwise carry a gun.

With regard to practicality? No, the LifeCard shouldn’t be the only pistol you ever own. And sometimes — f*ck practicality. This is a super cool little covert killer that’s beyond fun to show off to your friends and at the range. With a thread adapter, and in combination with a stubby silencer such as a GSL Pill Box or a Bowers Bitty, it becomes a quiet little dispatching tool.

We’ve heard some RUMINT that we’ll all soon be seeing some different models, and we’re holding our breath.

This year at the 2019 NRA Annual Meeting, Trailblazer was showing off a threaded version that’ll hopefully be available to the general public soon. You’re welcome.