Home » People » RECOIL is on the ground in Jordan

RECOIL is on the ground in Jordan This weekend is the 6th annual Warrior Competition at the King Abdullah II Special Operations Training Center (KASOTC), followed by the 2014 SOFEX (Special Operations Forces Exhibition) near Amman, capital of the Hashemite Kingdom of Jordan. Dubbed the “Olympics of Counter Terrorism”, the Warrior Competition is hosted by the International Counterterrorism Training Center for Excellence (and the Jordanian Armed Forces, who have a strong SOF tradition thanks to their current king). It features competing teams from all over the world including the Jordanians themselves of course, and also personnel from Canada, Afghanistan, the United States, Russia, Slovakia, Lebanon and many more. Named units include the Dutch NLMARSOF, Pakistan's Light Infantry Light Commando Battalion (NLI LCB), the “Snow Leopard Unit” of China's national police and Canada's CSOR.

In total 38 7-man teams (a mix of military and LEOs) from 19 countries will compete. Events include such named obstacles and challenges as the 3-Gun Gauntlet, Trail of Tears, Carbine Candy, High Angle Drive By and several others. SOFEX began Wednesday with a team muster and skills exhibition by one of the host national teams; it ends on Sunday with the King's Challenge Event. We'll bring you pictures and news from that – since our team is running with the cadre of Mission X, who runs the competition, we should get some good coverage (though PERSEC/OPSEC issues will of course impact some of what we can show). After the conclusion of the Commanders Conference the Exhibition begins – this has been variously described as SHOT Show with attack helicopters and “the World's Fair for Special Forces.” Equipment manufacturers and training suppliers from all over the world (including such US companies as BE Meyers Co and Trijicon) will be there. We are certainly interested to see what they are exhibiting, and what shows up from other countries – there's a lot going on, from weapon furniture to new aviation assets. His Majesty King Abdullah II Ibn Al Hussein was formerly a serving military officer. He had a long career in his county's SOF units back when he was Prince Abdullah (eventually becoming the commander of Jordan's SOCOM). Now that he is The Man those units receive his not inconsiderable patronage. The Warrior Exposition is a topic of much local discussion and is featured on virtually every local news station (see phone camera shots of a hotel television, below).

We'll be reporting more as time allows. Meantime here are a few shots from the trip over.

Oh, and here's an in international travel tip for you – if you're on a transatlantic flight of 300+ passengers, do your best not go be seated in the very back row of seats adjacent to the lavatories.  Things can become…fragrant. 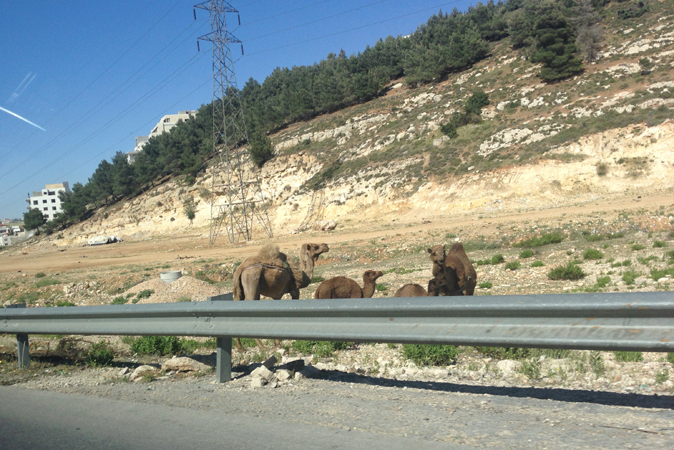