Big Horn Armory’s 500 Auto Max — the Most Powerful Handgun Cartridge in the World — in a Rifle.

The AR-15 rifle … the actual AR-15 rifle, designed by Eugene Stoner and produced by ArmaLite … was part of a U.S. Army request for a Small Caliber, High Velocity (SCHV) cartridge. A number of major ammunition manufacturers put forth candidates for the SCHV program, many based on the .222 Remington. The prevailing design became known as the .223 Remington, and it was decided that 55 grains was the ideal bullet weight for this caliber. For reference, it takes approximately 437 grains to equal 1 ounce — meaning your average 55-grain FMJ slug is just over one-tenth of 1 ounce. Compare that to the first time we fired the eyebrow-raising AR variant produced by Big Horn Armory in Wyoming, which sent a 440-grain cast lead slug in 500 Auto Max down range at roughly 1,900 feet per second. That’s 1.1 ounces of lead flying at just under 1,300 mph.

The Stone: Platform for the 500 Auto Max

If nothing else, this bit of ballistic dichotomy illustrates the utter versatility of the AR platform. While the .222/.223 has long been a staple cartridge for varmint and small game hunters, its diminutive size had placed a thick glass ceiling over the AR’s use in game-getting roles.

Based out of Wyoming, Big Horn’s original purpose in life was to create a Browning-pattern lever gun chambered in .500 S&W Magnum. Why zero in on this gratuitous caliber? Despite its air of flagrant “because-why-not” amount of energy, the .500 S&W Magnum has excellent potential for big game hunters. With bullet weights ranging from 265 to 700 grains, and several loads pushing a 500-plus-grain slug to supersonic speed, the .500 S&W Magnum is capable of dropping any and every large game animal on the North American continent.

Additionally, the big 500 brings this power to states with restrictive hunting regulations, some of which only permit hunting with straight-walled cartridges. Big Horn’s resulting lever gun, dubbed the Model 89, is one of the few long guns to chamber this massive magnum.

But Big Horn Armory wasn’t content to rest on their laurels. They went one step further and set about to put all that power into, arguably, the most popular semi-auto rifle in the country. Except for one not-insignificant problem.

The .500 Smith & Wesson Magnum, purpose built for use in their ginormous revolvers, sports a semi-rimmed case that refuses to feed from box magazines.

Their solution took the form of a variation they call the .500 Auto Max. This slap-your-forehead-simple fix consists of taking the original .500 S&W Magnum and turning down the rim, allowing it to cycle in semi-auto actions.

Tasteful lightening work in places like the magwell and trigger guard help keep the AR500 to a manageable heft.

None of the ballistic specifications change, and the only limits to rebuilding .500 S&W Magnum loads in .500 Auto Max are chamber length and pressure tolerances. When compared to their lever-action offering, their AR500 rifle offers faster follow-up shots, easier reloads, and all the bells and whistles of the AR aftermarket.

Think about being able to sling all that lead from a rifle that’ll readily accept thermal optics, IR lasers, and a rail-mounted chainsaw. (The latter would conveniently allow you to drop both an Elk and a couple of trees for firewood.)

Comparing the 500 to Other Big Bores

Both Underwood and Buffalo Bore currently stock a variety of factory loadings in .500 Auto Max. Underwood offers a 350-grain JHP, as well as their solid copper Xtreme Penetrator slug in both 350- and 420-grain variants, plus a 440-grain cast lead load.

Buffalo Bore has 350-grain JHP, 400-grain JFN (jacketed flat nose), and 440-grain cast lead. For both companies, the 350-grain JHP loads are marked at 2,300 feet per second, with the 440-grain cast lead listed at or near the aforementioned 1,900 feet per second. If you do prefer to roll your own, all of the components to do so are also readily available. The AR500 is based off of an AR-10 sized receiver set, explaining this immense, and handsomely sculpted, magazine well.

The rifle itself is built on an AR-10 receiver set. The .500 Auto Max round can be stuffed into an AR-15 magazine, and the AR500’s magwell is shortened to AR-15 length to accommodate the shorter mags. But building on an AR-10 base platform allows the use of heavier buffers and stiffer springs to mitigate the not-insignificant recoil.

Specifically, Big Horn Armory uses an 18-pound recoil spring and a 3.8-ounce buffer. This, combined with a mid-length gas system and an “in-line” muzzle brake makes the AR500 … manageable. Felt recoil is still rather stout, maybe on par with shooting 3-inch magnum shells out of a 12-gauge pump gun, but not joint-busting. 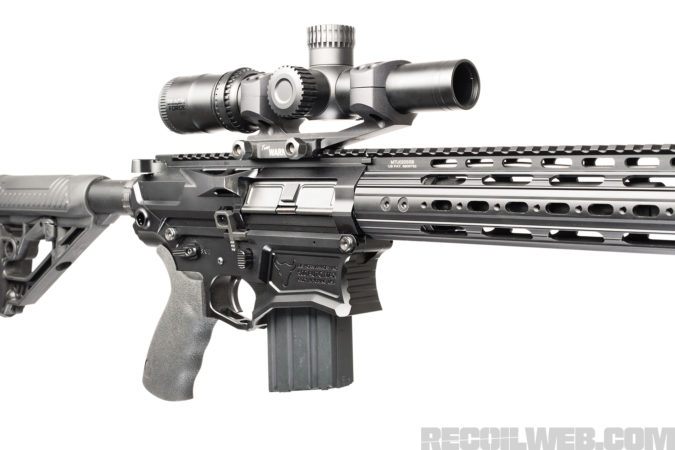 Nikon’s BlackForce 1000 scope provides 1-4x magnification and an accessible reticle, ideal for the short-to-medium-range trajectory of the .500 Auto Max.

The whole gun seems to track like an artillery piece, with a slow arcing movement to the rear with each trigger press. But the weight of the gun does bring it back down to level as part of its natural path of travel. The handguard is modular, but not to M-LOK or KeyMod standards.

It uses an older-style system of screw-in short rail sections. While not quite as convenient as the current iterations of plug-and-play handguards, it does allow for user configuration. Our test gun shipped with a single 20-round AR magazine modified to accept five of the larger .500 cartridges.

On that note, it’d be interesting to see how many could squeeze into a 30- or 40-round AR mag. We topped our test gun with a Nikon BlackForce 1000 1-4x in a Warne mount. Since our first outing with this rifle was to be on a veteran’s charity hog hunt, we thought an LPVO would give us a good balance of magnification and rapid engagement ability.

Unfortunately, the scope doesn’t smell like feed corn and, thus, didn’t attract any hogs for us to collect first-hand soft tissue ballistics on the .500 Auto Max. Uncooperative vermin notwithstanding, the AR500 rifle brings all the familiarity you’d expect from a standard-form black rifle, with significantly bigger ballistics.

We made several range trips with the AR500 rifle after our empty-handed hog hunt. Taking it as close in as 25 yards, we got an entire magazine through one ragged hole while standing and unsupported. But don’t expect to do that with any kind of record split times, as this gun will start to climb away under rapid fire.

It should also be noted that the .500 Auto Max isn’t a long-range caliber. According to ballistic charts on Buffalo Bore’s website, with a 100-yard zero the flat nose rounds we were shooting reach their apex around 75 yards. By 200 yards, they drop just over 8 inches. We did experience some feeding issues with the AR500. Toward the end of our testing, we started to experience increasing numbers of double-feeds. This was not an issue for us in the beginning.

Upon examination of the included magazine, we noticed the feel lips were spread noticeably. Not necessarily a surprise, as the .500 Auto Max case is so much wider than that of a .223 — but it’s a poignant reminder that, as with any firearm, magazines should be considered consumable components and ample replacements kept on hand. All in all, the AR500 does what it claims to — it delivers massive amounts of energy against heavy targets at short range. In this role, it offers several advantages over more traditional lever guns in similar big-bore chamberings, while being significantly less expensive than most of the other big-bore ARs we’ve come across.

If you live in a region populated by large game, or you like to demolish cinder blocks and junker cars on the range, then the Big Horn Armory AR500 is a reasonably priced demolition tool that may be just the thing to take down your first bear, or small family sedan.