It's no secret that I love lever action rifles.

I didn't exactly grow up with them beyond seeing them pop up in Westerns and for quite a few years I saw no real use for them. My ARs were always my go-to rifles from the 1980s till today. My bolt guns were always far more accurate. And it's not 1873 and I'm not 500 miles from civilization and resupply, so I don't need one caliber to share between my long gun and sidearm.

However, their simple design, classic lines, and fast handling characteristics quickly won me over. Still, when I made that move, I was always partial to lever guns that used a side loading gate like the Winchester Model 1894 or a box magazine like the Winchester 1895. The front tube loading styles never really did it for me. I didn't grow up firing tube-fed 22s (My first rimfire rifle was the Ruger 10/22) and above all else, I like to run suppressors whenever I can. That front-loading tube is only going to get in the way of the can and believe it or not, lever actions can make for the quietest suppressor hosts.

So, I stayed away from Henry rifles for the most part. I had handled enough to know that they were quality firearms and I had shot a few over the years to appreciate their accuracy. I just didn't think they were for me.

When the first side loading gate models came out a few months ago, I was eager to try one. Henry offered them in 30-30 Winchester, 38-55 Winchester, and 35 Remington. I own a few Winchesters in the first two calibers. The 35 Remington had me intrigued, though.

I first became aware of the round when I was younger and learned it was used by Frank Hamer to take down Bonnie and Clyde with his semiauto Remington Model 8. I had a 14-inch Thompson Center Contender barrel for the same round years ago and ended up giving it to a friend who hunts deer in Michigan and Wisconsin that was completely infatuated with the round.

I had to wait until August for this test rifle and while I have never been a big fan of “unboxing” videos. This one would have been completely worth it.

Pictures do not do this rifle justice. The blued barrel, brass receiver and breathtaking checkering on the stock made me feel more like opening the box of a custom rifle and not merely another production gun. In the looks department, this rifle is a complete and perfect 10! 35 Remington: A Little Bit about the Cartridge

The 35 Remington, also known as the 9x49mm Browning was developed in 1906 alongside the 25 Remington, 30 Remington, and 32 Remington. These four cartridges were rimless and designed for use in John Browning's classic semiauto rifle mentioned earlier, the Remington Model 8. Only the 35 Remington was good enough to hang around, though. 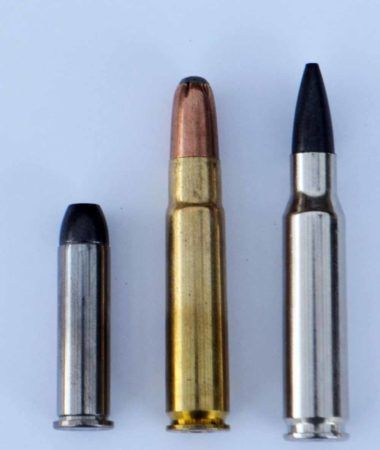 At ranges below 150 yards, the 35 Remington is one of the best calibers for deer and black bear. The case length is 48.77 mm, or 1.92-inches for countries that went to the moon, and a typical factory load drives a 200-grain bullet at a velocity of 2100 fps with 1950 foot-pounds of muzzle energy. The case has a slight shoulder and not much capacity for powder, so faster burning powders are the order of the day.

You can load lighter bullets intended for 357 Magnum/38 Special and get higher velocity but save those for the range. They cause too much tissue destruction on game animals. On the other end of the spectrum, bullets over the 200-grain weight do not expand reliably.

I picked up a few boxes of Remington 200-grain Core-Lokt soft point ammunition to test the rifle and some Winchester Power Point rounds in the same weight.

It may seem silly in our modern age of magazine-fed semiautos but being able to load a rifle from the breech was a huge turning point in military history. Even though lever action rifles were never used in a great capacity by any official standing army, I am sure the first users of the loading gate equipped lever action rifles and carbines back in 1866 were more than grateful. The earliest rifles with the Henry name were built at the New Haven Arms Company from Benjamin Tyler Henry's design. Although it was touted as the rifle that could be “loaded on Sunday and fired all week”, due to the sixteen-shot magazine capacity when using .44 caliber rimfire, there were complaints from shooters about dirt entering the magazine tube and gumming up the works or damaging the magazine tube while carried on horseback. In 1865 Oliver Winchester renamed New Haven Arms the Winchester Repeating Arms Company and a plant superintendent named Nelson King redesigned the magazine tube into a solid version while incorporating the side loading gate. This first appeared on Winchester's Model 1866 “Yellowboy” rifle that also added a forend to the rifle.

So, it came as a surprise when I saw that Henry retained the front-loading tube ability while incorporating the side loading gate. Then I saw the genius behind it. If you have ever had to unload a lever gun with a sealed tube, you must manually cycle your unfired rounds through the chamber. With Henry's new “dual-loading mechanism,” all you need to do is pull the front of the tube out and safely unload the rifle.

The Rest of the Rifle

Beyond the gorgeous exterior, lever-action rifles built by Henry Arms have a buttery smooth action and rock-solid lockup. The semi-buckhorn style sight has a diamond that is highly visible and the front sight is an ivory bead. If you want to add an optic, the receiver is drilled and tapped for scope mounts. While mounting a scope may be anathema to most aficionados of the lever gun, I mounted a scope on a Mossberg version a few years back and it made me really appreciate the inherent accuracy of the 30-30 round. With modern ammunition, many of these old lever guns are effective out to 300 yards instead of the inside 150-yard rules of the past. That may be the next go-around with the Henry in 35 Remington.

The 35 Remington is intended for medium to large game inside 150 yards. I set my target up at 100 yards to get a good feel for the rifle. The first shots were taken from the bench with the rifle supported by sandbags. Using the Winchester ammunition first, my best 4-shot group was at 2.85-inches. The Remington ammunition did a little better at 2.5-inches and for an iron-sighted hunting rifle at 100 yards, that’s more than acceptable. A low power magnification scope in the 2–4x range would more than likely tighten these up. I still had more fun ringing steel at 50-75 yards off-hand!

Another option to consider if you want to squeeze more accuracy out of the rifle might be to use Hornady Leverevolution ammunition that offers a polymer tip on the bullet. One of the drawbacks of a tube loaded lever-action rifle is having to use rounded tipped bullets that are not very aerodynamic because a pointed spire-tip up against the primer of a previous round can be a recipe for disaster.

Having used Leverevolution in other calibers, I can attest to the accuracy and greater distance gains. Unfortunately, I was unable to obtain any for this review.

If there is a downside to this first batch of rifles it may be that they are “too pretty.” It has never been a problem for me, but I could see truly dedicated hunters craving a more subdued finish and reduced checkering on these rifles or else they may be hesitant to go afield with them. Maybe as time goes by we will see these rifles offered in blued steel with plain walnut furniture.

The other negative might be caliber selection. I don't recall Henry manufacturing any of their other rifles in either 38-55 Winchester or 35 Remington, and 38-55 is a bit of an oddball to most shooters as well as being a bit pricey and hard to find. If the company sees success with these rifles, more are sure to follow in perhaps, 45-70, 357 Magnum, 44 Magnum, and perhaps even my own beloved 41 Magnum. We may even see some threaded barreled versions down the line, now that the rifle is not enslaved to loading through the front of the tube.

One response to “Review: Side Gate Lever Action Rifle in 35 Remington from Henry Repeating Arms”