The folding stock AR has long been a unicorn. Many have tried to change the game by fielding an AR platform with a folding stock, though to do so, the basic design had to be altered to allow the weapon to operate. The Robinson XCR and Para Ordnance’s TTR rifle are two good examples of folding stock designs; they share many parts commonalities with the AR but suffer from the fact that AR “redesigns” are viewed with much skepticism from the Doritos stained fingers of the internet gun forum community. Because those with actual experience (and those with experience with the product) can’t compete with twice their numbers speaking out against a product they might never have been in the same room with, such designs don’t catch on.

Of course some of the designs are flawed to begin with and deserve all the negative press they get.

If an AR is designed to fold, it sacrifices some of the features that make a rifle what it is and traditional parts may not work with it. The Para TTR was a much praised design when it hit the market in 2009; parts quality and the lack of after-market options made sure that didn’t last. Even after market stocks, perhaps one of the easiest after-market options to create, were non-existent and the OEM stock was uncomfortable to many.

The XCR suffers much the same problem; rock solid design but it doesn’t have the parts commonality that the market seems to want, especially when many are appearance-over-function driven. What many wanted was to make any AR a folding stock AR; they could have any upper or lower or stock they wanted. Despite all the engineering expertise in the firearms community, such a product didn’t exist. 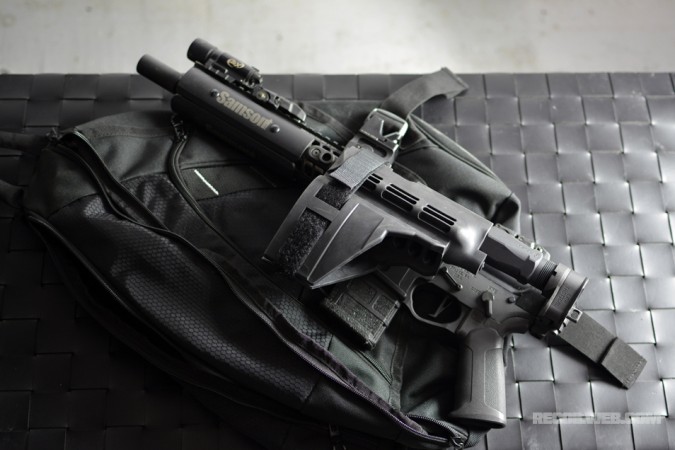 Law Tactical launched their first generation adapter in 2012. Improvements from user input lead to the Gen 2, continued input lead to the Gen 3, one of which I received for a review a few months ago. The concept of the Law is simple; it's a hinged adaptor that allows you to make any traditional AR a folding stock rifle. 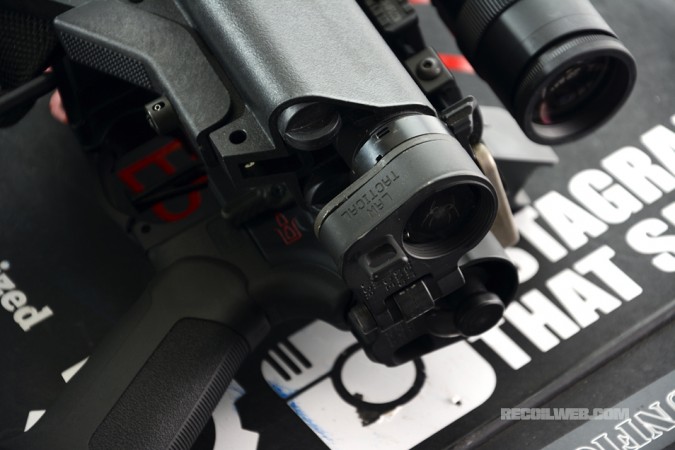 Introducing more moving parts into a weapon is generally a Bad Thing. Even the best engineering in the world cannot account for what the user will put that weapon through. The more parts, the more opportunities for failure and when a machine functions perfectly, it's doing what it was designed to do and is therefore not actually impressive. What is impressive is when a machine functions perfectly without unreasonable maintenance from the user. Well, the Law has a set screw to prevent possible loosening on the lower receiver. I used this set screw while it was mounted on my truck gun, but when it removed it and installed it on a different rifle; I removed the set screw from the adapter completely just to see if any problems would develop. Through more than a month of use the adapter remained stable. Experiences may vary but for me the set screw is more of a just in case as opposed to a necessity. I’m glad it’s part of the design, but even without it the Law folder functioned as intended. The Law folder is three main pieces; the hinge mounts to the rear of the lower receiver via a threaded adapter, holding the rear takedown detent and spring in place as opposed to the traditional back plate. The buffer tube screws into the Law body, the buffer retainer and spring are contained here as opposed to the lower receiver.   Then a simple bolt carrier extension is attached to the rear of the bolt carrier, which allows the BCG to function normally. Because the Law increases the linear length of the buffer tube, the BCG lengthener is needed for proper cycling of the BCG during recoil. The advantage of a folding AR is pretty simple; a more compact package that is easier to carry and easier to conceal. The appeal for me was to have a folding 10.5” AR that could easily fit into a backpack. Even with a collapsed stock, the 10.5” guns are still too long for most common sized bags and for a true “grey man” platform. Bags that will fit a traditional 10.5” stand out too much. Sure, I could go with a 7.5” or shorter, but the loss of muzzle velocity in the shorter ARs isn’t worth the length trade off. I installed the Law on my designated vehicle gun and began using it. The first thing worth noticing is the ease of installation; clear directions and a basic understanding of how tools work and you are good to go. The law collapses to the left side of the rifle and does not lock into a folded position, which makes deployment much faster because you don’t have to work a lever or button. Once locked in place it's stable, just as stable as a traditional buffer tube. The adapter is made of tool steel, as opposed to aluminum which is part of the reason for its strength. The other reason is quality engineering in the design; it’s reinforced where it needs to be and slim where it doesn’t, allowing it to function without interfering with the operation of the rifle. The Law adapter body includes a set screw to prevent loosening and a QD attachment for a sling if you want to run one there. During my testing I ran the adapter on two separate rifles with two different missions to see how well the adapter held up to various uses and abuses. 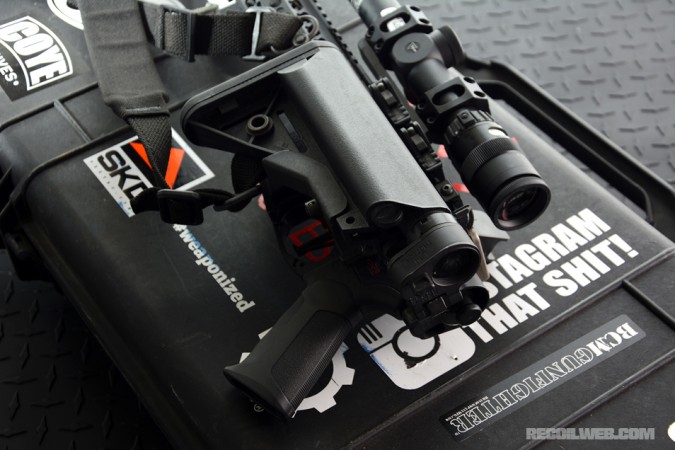 After a combined 1000+ rounds fired, I've yet to experience any issues with the functionality of the Law adapter.

Deployment of the Law becomes intuitive and fast; with no latch to release it’s as simple as pulling the stock back towards you and with a small amount of force it locks into place every time.   When it needs to be folded away, a simple push of the large release allows sure folding and the release button is recessed to help prevent inadvertent release if it makes contact with your gear.   Durability is without question as far as I’m concerned. The latch and hinge are as simple as possible and both are reinforced by design. The only question mark in the design is the buffer retaining pin. It doesn’t sit in the Law in the traditional vertical; instead it is allowed more movement than it would have if installed in the receiver itself. I don’t know if this was intentional or not but it has no effect on the performance of the folder or the buffer tube assembly.   As for the engineered strength, well I stood on the Law (not very scientific, I know) with the rifle laid across two chairs, hinge side up and the latch didn’t budge. Pretty impressive. 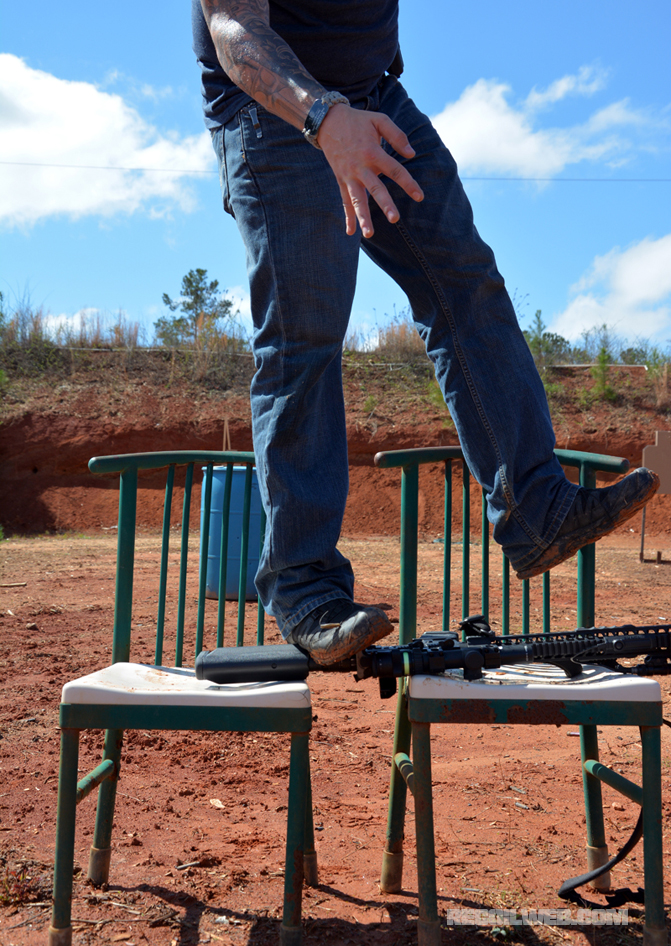 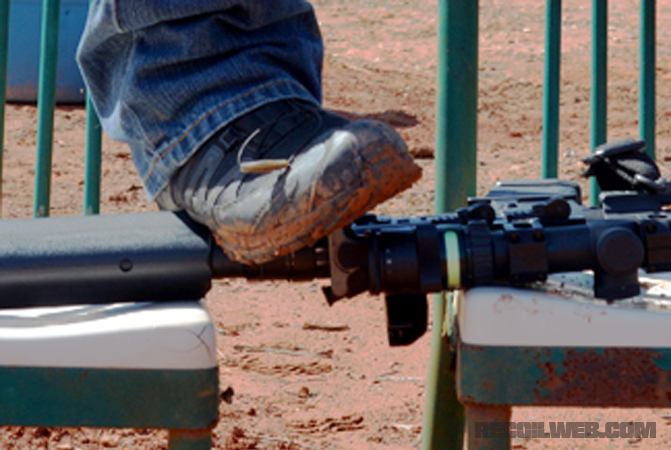 The Law adapter allows for any AR to be folded, but the question remains, why bother? Some have derided the LAW as a needless product, citing that if you wanted a folding platform, why not buy one that was designed to fold in the first place? Well, first off, this is America so we can and second, because AR platforms designed to fold have not done well. Parts options and availability is a large factor in weapon choice for many. Being able to take your existing rifle and make it more compact and transportable is a huge plus. For some, there is a desire to be able to fight with a folded rifle and for that, I can’t say much other than try it some time.   A rifle platform used as a pistol is a novelty at best; they are designed to be fired from the shoulder so even with a red dot sight their usefulness with the stock folded is marginal at best. An AR with the Gen 3 Law can be fired from the folded if necessary. Note that while Law Tactical doesn’t recommend it, I did it anyway and it worked just fine. If the rifle is fired from the folded position, the stock can be quickly locked out, the empty casing cycled and the rifle will function in the traditional fashion.   On an SBR it’s a no-brainer; making compact even more so. On a full size rifle it gives you the option of a smaller footprint without sacrificing muzzle velocity or rail length, also a win. My only complaint with the Law is that the included QD socket is at the 6 o’clock as opposed to the 3/9 o’clock positions. Minor issue I know, but a side mounted socket just makes more sense for two point slings.

For tight quarters; vehicle or air frame storage, or inconspicuous transport of an SBR, the Law is an excellent option because let’s be honest, the amount a tennis racket bags is out of place will be directly proportional to your distance from a tennis court and the larger covert bags look like they have guns in them. If you want a folding AR platform, the Law really is the best option because it makes any AR a folder.