Review: The Redi-Catch by Boonie Packer Bottom Line Up Front: The Redi-Catch from Boonie Packer allows you to lock an AR-15 bolt back with the magazine release.

No doubt, some of you are reading this asking yourself how this could possibly be useful. Firstly, it's an ergonomic improvement. Locking the bolt back on an AR can be a little cumbersome; you have to take your hand off the pistol grip to run the charging handle while concurrently depressing the small nubbin' on the bottom of the bolt catch. On the range this is a minor annoyance, and if you're doing it in a firefight it's going to be for good reason (IE: a malfunction such as a double feed). In the former situation, frankly it's just for conveniences sake. In the latter it literally can be life or death; if you're locking your bolt back in a firefight, it's because the gun went down and you're trying to fix it. Anything you can do to truncate the time between good rounds on target is a positive—so long as reliability isn't compromised. With the Redi-Catch, all you have to do is depress the magazine release and pull back the charging handle. Your magazine will fall out and the bolt will lock back. I honestly can't think of a time where I would want to lock the bolt back but keep the magazine in place; if you can please comment below. When practicing clearing double feeds, about half the time the malfunction cleared with just that action. In other times I just completed the exercise through the normal fashion. The Redi-Catch is very quick with this drill.

Some similar items have hit the market before, some good, others expensive, and some inconsistent. AXTS released a proprietary receiver that accomplished this via an internal mechanism. LWRC has some rifles with bolt lock/releases on both sides of the receiver. 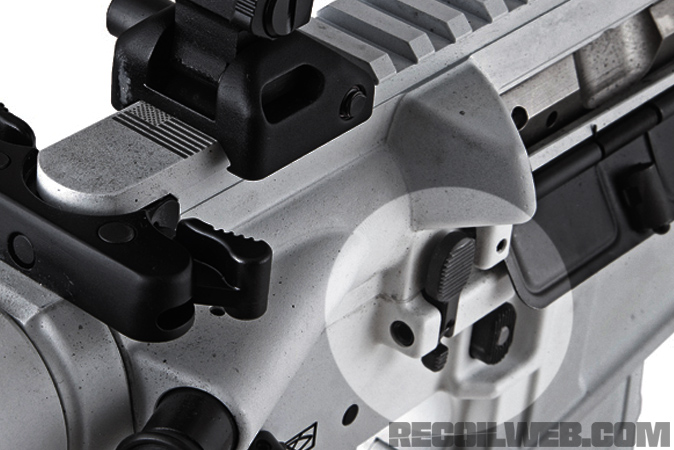 Ambi-lock on an LWRC Six8

RevEng had one that was a single piece called the, ‘FCD‘ (Firearms Control Device) but the company has been defunct for years and it was a pain to install or remove (and the handful of FCD's that made it to market are rare birds). There are external bolt catch attachments for lock/release with the trigger finger but they can cause problems such as mags failing to lock back and other issues. RevEng “FCD” on one of my beat up rifles

The Boonie Packer design is two pieces: 1 new magazine catch (with an extended arm) and 1 ‘S' shaped piece of spring wire. This serves two purposes: It's just as easy to install as any other magazine catch, and the spring wire reduces wear on the bolt catch. With a fixed design, such as the aforementioned FCD, if you press the magazine release prior to pulling the bolt back, the bolt catch will drag on the bolt carrier group (BCG). This causes scarring and marring; eventually you're going to break something. Because the spring wire allows for some movement, the bolt catch paddle can travel up and down during the rearward motion of the BCG—just like it does when an empty magazine induces a locked bolt. I found installation of the Redi-Catch easiest to do with the upper and lower receiver separated. First simply remove your existing magazine catch and replace with the one from Boonie Packer. Then the spring steel wire is inserted into a hole on the Redi-Catch and snaked around the bolt locking mechanism. They've even included a short popsicle stick to aid in this effort but I found it unneeded. That's it—your magazine release is now a bolt lock.

Initially I had some trepidation about the 2-piece design. I've used the single-piece RevEng FCD since before they were even in full production and became somewhat enamored to it. However, installation of the FCD is somewhat time consuming as the entire bolt catch mechanism has to be removed. Then of course there's the additional wear that occurs on the locking latch, unless the bolt is pulled entirely to the rear before depressing the magazine release (something I discovered later, hence the photo of the mangled locking latch). Happily, the uneasiness I felt was unfounded. The Redi-Catch holds the spring wire firmly in place with the hole and arm extension, and if I happen to wear it out (which I do not anticipate) it doesn't otherwise affect the function of the rifle. It's snugged right up to the receiver so there are no worries about snagging or pulling it free. As usual, there are some downsides. While the Redi-Catch will fit into any milspec forged lower, it may or may not work with your billet lower (or other non-standard lower). I did use it with a Grey Ghost Precision Specter rifle and had no problems, however (and combined with Grey Ghost's right-side bolt release it was a dream). As with the lower, if you have a non-standard, enlarged or otherwise contoured, bolt catch it may or may not fit. With a Redi-Mag system, the Redi-Catch will not run with the steel version but will with the aluminum version. If you're using an ambidextrous release, you will lose that ability. The magazine release is also slightly harder to depress due to the added pressure of the spring steel. If you're a lefty, you won't find as much utility in this item. All of this may sound like a lot, but it really isn't–the Redi-Catch will work with probably 99% of the lowers on the market. Boonie Packer designed the Redi-Catch to be a compliment to their Redi-Release (you can purchase them as a set) but stands on its own just fine.

You can get yours here.