London, Ontario, named of course for the British capital city, is home to the Royal Canadian Regiment Museum. Housed in the west wing of the historic Wolseley Hall, the first building to be built by the Canadian government especially for its new standing army in 1886, this museum chronicles the history of one of Canada’s oldest military units.

First settled by Europeans between 1801 and 1804, London, Ontario, is situated along the Quebec City-Windsor Corridor, the most densely populated and heavily industrialized region of Canada. Approximately halfway between Toronto and Detroit, it’s also home to the former Canadian Forces Base London, which was the first purpose-built infantry training school erected by the Canadian federal government. It served as an early symbol of the establishment of a permanent military force in Canada, and part of the base was designated a National Historic Site of Canada in 1963.

Named for British Field Marshal Viscount Wolseley and used for training regular and reserve units of the Canadian Army since it was established in 1888, the 150-year-old barracks are the oldest building in the Canadian Forces Base (CFB) London. It has been continuously occupied by some element of the regiment since the completion of construction.

The original architectural drawings for Wolseley Hall from 1886 actually allocated space for a museum, but in the past five years the museum completed an expansion. As a result, it now includes two floors with galleries that chronicle the regiment’s exploits throughout its history. One of the stained glass windows in the museum’s Regimental Chapel. It honors the soldiers who fought on the Western Front during WWI.

Within the building are many artifacts, but the building itself is also ripe and rich with its own history. “The U-shaped barracks were designed by architect Henry James, who eventually became the official designer for many other barracks and armories throughout Southwestern Ontario,” says Georgiana Stanciu, Ph.D, director of the Royal Canadian Regiment Museum. “What is interesting to note is that the plans of the building included a room designated as a museum.” 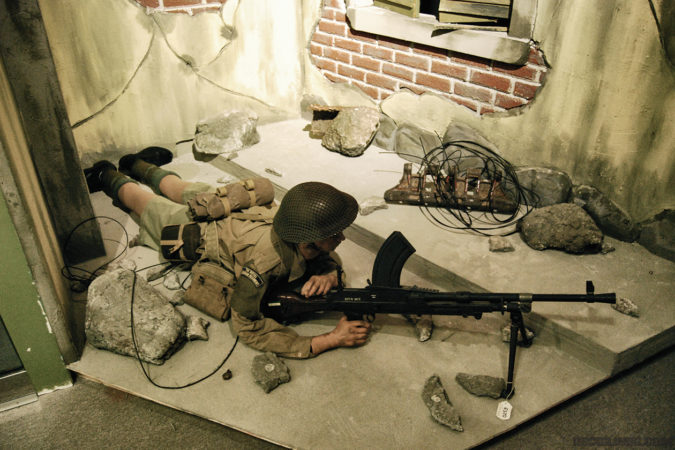 This display depicts a soldier of the Royal Canadian Regiment in the Italy Campaign in WWII and includes a Bren MkI light machinegun.

Touring the Galleries
It’s hard not to feel the history as soon as you enter the main entryway, where a wooden cross from Flanders Field from WWI is presented. From here, visitors enter the museum via the Colonel Tom and Miggsie Lawson Foyer, which features gold bricks that adorn the walls, each meant to serve as a memorial of a loved one or mark a momentous event.

The Foyer features a pair of stained glass windows on either side. These were created by Canadian artist Christopher Wallis of Grand Bend, Ontario, each a memorial to a past “Royal Canadian,” both of whom gave much of themselves for their country.

The inscriptions on the windows read: “Stained glass window in memory of Colonel Tom F.G. Lawson, Colonel of the Regiment 1981-’85. ‘A Tribute to his Regimental Family’ from his wife and children,” and “Stained glass window in memory of Brigadier T.E.D’O. Snow, Commanding Officer of The RCR 1941-’43 and Colonel of the Regiment 1978-’81. On it are the words that best denote this much beloved Brigadier, ‘Gallant Soldier, Modest Gentle Man, Trusted Friend.’” The window for Colonel Lawson was designed and installed in 1991, while Brigadier Snow’s was completed in 1997.

The Colonel D.B. Weldon Library and Museum Quiet Room (Chapel) offers historical references collected by the RCR Museum, available to onsite researchers with permission from the curator. This part of the museum is named in honor of Colonel Douglas Black Weldon, who served with the 47th (Western Ontario) Battalion of the Canadian Expeditionary Force during World War I, and later was appointed Second-in-Command and then Commanding Officer of the Canadian Fusiliers (MG) (City of London Regiment) during WWII.

The chapel now houses many past Regimental Colours, with the oldest dating back to WWI. “We preserve the history of the regimental colours,” Stanciu noted. “These colours are laid out in perpetuity in a church or chapel for the regiment.”

The Centennial Gallery includes various helmet and cap badges from Canadian Military Forces from the 19th century to the modern day. This includes history on the Regiment Cap Badge, consisting of an eight-pointed diamond cut star — upon the star a raised circle surmounted by the crown; within the raised circle, the block letters “VRI,” the Imperial Cypher of Queen Victoria.

While it’s typically common that when a Royal or Imperial Cypher forms part of the badge of a regiment it’s normal for it to change with each succeeding sovereign, this is not the case with the badge for the RCR.

While from 1901 to 1919, which saw the reign of King Edward VII and later King George V, the regiment’s cap badge featured the latter cipher, but the regiment continued to use the earlier “VRI” badges throughout this period as well, and there was even a formal petition to return to the previous cipher.

“In 1919, the King (George V) granted The Royal Canadian Regiment permission to wear ‘VRI’ in perpetuity,” explained Stanciu. “This is a very unique privilege for the regiment.”

The RCR Museum features several memorials to those who gave their lives in service of their country, beginning with memorials for the North West Rebellion and continuing to those who sadly died in so-called peace keeping duties. The museum further chronicles the sacrifices made, beginning with a gallery devoted to its early years (1883-’85).

There are specific and specialized galleries for the Northwest Rebellion, the Yukon Field Force, the South African (Boer) War, WWI, the Interwar Years, WWII, the Korean War, the Cold War, UN and NATO operations, plus galleries devoted to the Infantry and even the regimental band. It isn’t just the British Army that dons “red coats.” This is a full dress uniform of the Royal Canadian Regiment as it looks today.

Key pieces in the collection include the WWII-era uniform of Brigadier Milton F. Gregg, awarded the Victoria Cross for his service during the Battle of Canal du Nord in France in 1918. Unfortunately, Gregg’s Victoria Cross, which had been donated to the museum in the late 1970s, was stolen and never recovered.

Within the museum’s displays are several dioramas showcasing the RCR on various campaigns. The model of the Battle of Paardeberg depicts the monumental battle, remembered every February to this day. Also exhibited is a replica of “Private Thompson’s scarf of honour.” The scarf, crocheted by Queen Victoria, is one of the rarest honors bestowed on a soldier of the Empire. Awarded to Private Thompson, it represents a unique distinction for a Canadian soldier.

The Gallery to WWI includes a Vimy Ridge diorama showing the progress of the unit, while a full-size replica trench allows visitors to get a feeling for what it must’ve been like for the young men who traveled so far from home. This battle has been remarked upon as the event that bought Canada her independence. It was the first large-scale operation carried out completely by the Canadian Corps of four divisions, and the first offensive carried out by the Allies during the war that was truly a success.

Visitors can see the evolution in dress and service uniforms that soldiers serving in the RCR experienced, including helmets, tunics, and boots soldiers may have worn throughout the past century
or more.

Various items captured from “The Hun” on the Western Front during the Great War, as well as British and Commonwealth small arms, make up the current collection on display. These include a rare Ross rifle, a straight-pull bolt-action .303-caliber rifle that was produced in Canada from 1903 to 1918, and original period recruiting posters.

WWII items include Enfield rifles and a British-made PIAT (Projector, Infantry, Anti Tank) gun, as well as numerous captured items, such as items from General Charles Foulkes, commander of the Canadian forces, who accepted the German surrender on May 6, 1945 from German General Johannes Blaskowitz at the Hotel de Wereld in Wageningen, Netherlands. This effectively ended WWWII. Below: The Royal Canadian Museum’s gallery of small arms that were carried by its soldiers from the late 19th century to the late 20th century. These include single-shot rifles, such as the British-made Martini Henry, the Lee Enfield, Bren Gun, Thompson submachine gun, and M-16, as well as .30 and .50 machineguns.

“The Luger pistol that we have is reportedly the sidearm that belonged to General Blaskowitz,” said Stanciu. “However, we have no proof so it may just be a story, but it was given to the museum directly by General Foulkes, so there is really no reason to question it.” Upon his return to Canada, General Foulkes was appointed Chief of the General Staff.

The Cold War and peacekeeping galleries have been recently updated and here visitors can find interesting artifacts, including the original “Commando Post” used by the 1st Battalion of the RCR during the Korean War, as well as uniforms, small arms, and other items from not only the Regiment but also from around the world.

A display dedicated to Afghanistan allows visitors to enter a sentry post, while a near life-size mural depicts a RCR team in Afghanistan. “The artist wanted this to look as lifelike as possible,” explained Stanciu. “This isn’t based on any particular incident and it isn’t taken from a photo, but the faces are very much meant to be a close approximation of soldiers who may have served in Afghanistan.”

Beyond the Walls
While far too small a building to house large pieces of artillery or armored vehicles, several notable examples are on the grounds outside Wolseley Barracks. These include a Sherman M4A2E8, which saw service in the Korean War; a Bren Gun or Universal Carrier from the Italian campaign; a 25 pounder (Ordnance QF 25-pounder cannon), the main British field gun from WWII; and a more modern Lynx reconnaissance vehicle of the type used during peace-keeping operations in the Cold War era.

There’s also a captured Japanese Type 41 75mm Mountain Gun that was presented to the museum, despite the fact that the regiment saw action in Europe not the Pacific area of operations in WWII. Outside the museum is also the Regimental Memorial of The Royal Canadian Regiment.

Preserving the History
Many of the artifacts in the collection have been preserved thanks to the efforts of the regiment’s “Association of Old Comrades,” formed following WWI. “This was created to take care of the traditions of the regiment,” said Stanciu.

Following WWII, the museum was still open just through private tours, but began to take shape in the 1950s and early 1960s. It was officially designated a Canadian Forces Museum in 1973.
“This is very important to note, because this is when the Canadian Military Forces also established a military museum network,” added Stanciu.

While not the largest museum in this network, it does offer a fine collection that preserves the artifacts that tell the story of the regiment and remind visitors of the sacrifices it has paid over the past 150 years.