FN is About to Have its Lunch Stolen …

When Ruger announced it was getting into the 5.7 game with a new handgun, the gun-buying public let out a collective, “Err, what?” No doubt seeing that FNH had the market to themselves for years and were able to charge a premium as a result, Ruger’s head shed decided that they too would like a piece of that action. Their solution wasn’t to simply shoehorn the 5.7×28 cartridge into an existing handgun design, but to come up with an entirely new platform, albeit one that draws from an unlikely source.

In its civilian guise, the 5.7 has always suffered from a critical deficiency. Bowing to the concerns of regulators, FNH itself has served as a gatekeeper when it comes to effective ammunition, and mere peons have had a hard time getting their hands on the good stuff. Without a reliable source of effective self-defense ammo, gun owners have always struggled to find a role for the 5.7. Factory load options range from the underwhelming (and underpenetrating) SS198LF, to the SS197, loaded with a 40-grain Hornady Vmax that’s a great varmint bullet when shot at 5.56 velocities, but scores a resounding, “Meh,” when exiting the Five seveN pistol’s barrel. Boutique ammo makers have sought to capitalize on the lack of decent factory fodder, but they have very limited sources when it comes to brass and remain outside the mainstream when it comes to distribution, so really haven’t made much in the way of inroads.

The recently announced 40-grain Gold Dot load from Federal may just be the shot in the arm this caliber has needed. If it delivers, then in combination with a resurgence of interest sparked by Ruger’s entry to fray, might be enough to push the 5.7 out of its current backwater. On the face of it, the 5.7x28mm should offer a lot to those looking for an alternative to conventional self-defense cartridges, as it was designed from the get-go as a means of exceeding the ballistics of the 9mm in military applications. Whether or not those applications are directly applicable to those of us who carry a pistol but don’t wear a uniform is open to debate, but its qualities of high-capacity and low recoil are attractive across the board. Despite the somewhat exotic caliber, the 57 is a basic bitch when it comes to field stripping. Note lack of camming surfaces below barrel.

Kick Tires, Lift Hood
At first blush, the Ruger 57 looks like any other modern semi-auto handgun. It’s not until you start digging deeper that you notice a lot of engineering has gone into this thing in order to make it run reliably with the 5.7x28mm round.

Much like the SIG 320, it’s a chassis-style pistol, with a chunk of CNC’d steel serving as frame rails, fire control housing, and recoil impact face, while glass-filled nylon wraps around it functions as both the grip and a place to hang the mag catch. The two are pinned together just above the trigger guard, while a dovetail secures the rear of the chassis in the beavertail. Fine stippling adorns the grip surfaces, and there’s a five-slot Picatinny rail under the dustcover, should you wish to add a WML.

Unlike a conventional design, there’s no locking block, as the barrel isn’t mechanically locked to the slide when in battery. Instead, it recoils longitudinally as the bullet travels down the bore, before stopping as it hits the leading edge of the feed ramp, allowing the slide to continue. Because there’s no vertical component to the barrel’s travel, this makes for a more accurate pistol, as there’s one less action to be consistently performed.

The slide itself has been lightened externally, but once it’s off the frame, you get a better idea of just how much material has been removed, in order to deal with the 5.7’s reduced recoil impulse. There’s almost nothing left around the breech block, and relief cuts abound in the area to the rear of the front sight, dropping the slide’s weight to 9.6 ounces. While care has been taken to avoid stress risers in the weakest area at the rear of the ejection port, it’s a good bet that if the slide is ever to fail, it’ll be in this location. Front and rear cocking serrations add to the tally of chips. Top round in the steel magazine seems like it’s halfway into the chamber already — failures to feed should be unheard of.

One reason for aggressively removing steel is that the end user will probably want to add mass in the form of a red-dot sight, which Ruger has made easier by including at least one mounting plate with the package. As we received a preproduction version of the gun, the full gamut of options wasn’t yet ready and the first didn’t fit any of our preferred MRDS, so we made use of the excellent irons. The front is suppressor-height and features a green fiber-optic rod; the rear is adjustable for windage and elevation, while thankfully dispensing with the near-obligatory white dots on either side of its square notch.

The Ruger’s controls are conventional, with ambi safety levers occupying the same space they’d be found on a 1911, and a slide release that falls under the thumb. There’s a scalloped fence surrounding the release lever, making it slightly easier to disengage than to apply, but most people won’t have a problem with either operation. Primers are lit by means of an internal hammer, which is visible through a redundant cut out in the rear of the slide. Borrowed from the company’s LCP line of pocket guns, this ignition mechanism can best be described as falling somewhere between double and single action, as the hammer is partially cocked in the same way a Glock’s striker is — on pulling the trigger, it goes through the rest of its travel before falling off the sear and flying forward to hit the small-diameter, sprung firing pin located in the slide. As a result, trigger feel is somewhat mushy, with a rollover break at 4 pounds and a 3/8-inch-long reset. It’s not terrible and can be gotten used to with a short amount of practice, but a 1911 it surely ain’t. Due to the slide’s serious weight loss program, the 57 looks nothing like Rugers of old, which looked like they’d been chiseled from living rock by druids. This one’s pretty svelte in comparison.

The 57’s barrel is made in-house and finished in black nitride, which should ensure it lasts longer than its owner. Unlike conventional center-fire semi-autos, there’s no feed ramp; just a chamfered lead into the chamber, and given a combination of a bottlenecked cartridge design and an almost straight line from the magazine, failures to feed should be nearly unheard of.

Speaking of magazines, Ruger opted for steel rather than polymer. For a round with the 5.7’s dimensions, this makes a lot of sense, as it allows for a smaller grip frame than might otherwise be expected. Yes, it’s still a long way, front to back in comparison to a 9mm, but the distance across the grip is kept to a minimum in order to control overall circumference. The pistol’s grip measures 5.3 inches around, just below the trigger guard, which is right in line with most double stack 9mm’s. In comparison, the portly Glock 20SF requires around 5.8 inches of tape measure to wrap around the same location. Look ma! Sights for people who can shoot!

Despite the pistol’s grip length, the all-important reach to the trigger is very manageable, even for shooters with smallish hands, and as a result, the firing cycle feels easy to control. Unlike its closest competitor, there’s no stretch to get the pad of a digit in contact with the trigger’s face before shifting position halfway through the pull. Ruger saw fit to add a gas pedal safety to the trigger’s face, which in conjunction with the manual safety and partially cocked hammer seems entirely redundant, but since Gaston brought his creation to the world in 1982, the greater public has gotten accustomed to seeing them on polymer-framed handguns and now probably expects their presence.

Most shooters in the market for a handgun in this caliber are going to want to make a direct comparison to the only other option presently out there. So let’s do just that. In terms of overall feature set, the Ruger is clearly ahead of its FN rival in terms of ergonomics, iron sights, and the ability to mount optics — there’s also no annoying magazine safety. And then there’s the price, which amounts to a $400 difference, virtually guaranteeing Ruger will sell every one they can stuff into a box. The FN product is, however, time-proven and in both military and police service around the world, and while Ruger isn’t exactly an upstart when it comes to making guns, it’s their first venture into this particular market segment.

If you’re sold on the idea of the 5.7x28mm as a viable defensive round, then rejoice, as Ruger’s newest addition is sure to give impetus to additional product development from competitors and ammunition companies. Those of us who grew up around the tiresome and infantile “9mm vs. .45” debates might have a sense of déjà vu when it comes to online arguments regarding the caliber’s effectiveness — we’ll give the newest ammo loads a fair shake, and let you know how things work out so you can come to your own conclusions. 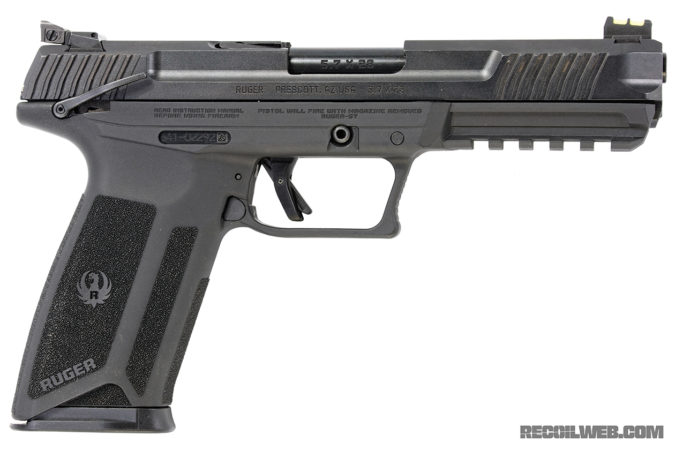 With irons this tall on the first production guns, we have to believe factory threaded barrels aren’t too far behind. Which is a good thing, as the 5.7 round is loud.