Of all the new firearms-related things revealed or displayed during last week's SHOT Show 2015, the Salient Arms “Jailbreak” (and, by extension, the entire GRY rifle) is definitely one of the most unique and interesting.

The Jailbreak is neither concussion reduction device nor simply a brake, as some have described it. SAI describes it as a ‘new way to look at muzzle devices,” and that seems to be a pretty accurate statement. The Jailbreak, which has multiple chambers, threads onto the SAI rail system (not the barrel) and can be used with any muzzle device a shooter might prefer – or none at all. It is a tool-less design, much as the overall system it was designed to accompany that can be switched out in just a few seconds in the field with minimal effort.

“The end user can use any muzzle device he wants and the Jailbreak will react the same way,” explains Salient's Adrian Chavez. “Basically it traps the gas and makes it do what we want it to do. It slows the gasses down, reduces recoil and reduces flash and concussion. You can attach it to a weapon without a muzzle device and it will still reduce felt recoil.

Because the Jailbreak attaches to the rail rather than the barrel there is no zero shift. Combined with their proprietary levered rail system, which itself is a remarkable rifle accessory, the Jailbreak allows for multiple “loadouts” to be switched efficiently at need. Thus for instance a shooter could change from a weapon accessorized for daylight/vehicle use to low-light/MOUT or night-time precision use literally in moments.

Is that a widely demanded capability? Admittedly not, but for those who do need or want it that's a very Good Thing indeed. There's a lot more to talk about when it comes to SAI's new development – the rail system obviously, the 7.5lb GRY AR15 rifle itself, their proprietary barrel nut (8 points of contact), the rail system (which will be available separately from the GRY rifle once it has been released), a very sexy bolt carrier group with an integrated once-piece gas key, the development of the “Salient Earth Grey” MILSPEC Type III hard coat Teflon infused color anodizing you see in these pictures, upcoming SR25 compatible .308s, BLU striker-fired pistol and RED 2011 handgun. Yes, there is a lot going on at Salient Arms International.

More on all that in the days and weeks to come – meantime, post any questions you might have in the comments below so I can ask Adrian to field them (or see if he'll just weigh in directly).

Hopefully soon I'll be able to get the GRY out on the range to see how it measures up – will advise. You can get a better look at the SAI Jailbreak in the pictures below. For more information about Salient, visit their Facebook page: https://www.facebook.com/SalientArmsInternational 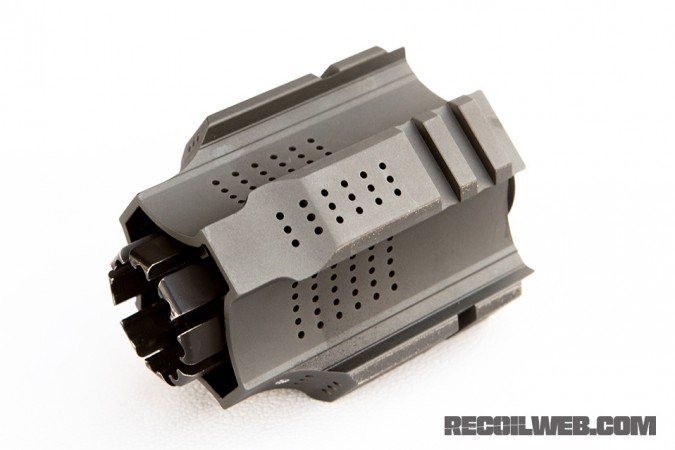 VWERKS Recon - Military Buildup
Short Barreled SAINTs from Springfield Armory
Dawn of Planet of the Apes - will the Gorillas have trigger discipline?
Expert Advice for the Ultimate DIY Hunting Adventure