From New Hampshire with Love

While the term Virtus dates at least 600 years before the birth of Christ as a way of describing the virtues of Rome’s fighting men, it feels like it took the 7.62 x 39mm version of SIG’s namesake MCX Virtus nearly as long to reach the market.
But, it’s arrived. And, like Horatius at the bridge, the MCX x39 earns the heroic Virtus commendation by standing tall amid an onslaught of thousands … of rounds … of mostly garbage ammo, that is.

This isn’t SIG’s first rodeo building a modular platform with the ubiquitous Russian cartridge in mind. It’s hard to ignore the company’s redheaded stepchild, the SIG556xi and its stillborn AK magazine compatible variant. Yet, leave out the misguided attempt to capture the nobility of SIG’s SG 550 series rifles in a U.S.-made package and concentrate on the configurable nature of the rifle, and you might see parallels in the company’s vision for the MCX platform. 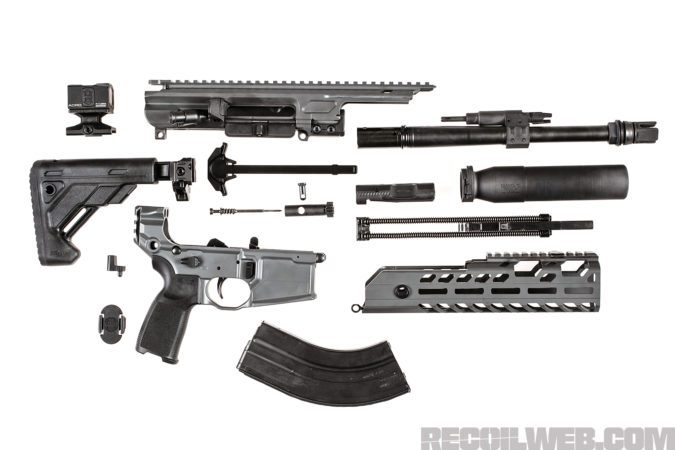 The MCX x39 was designed with parts commonality in mind. The only unswappable parts are the bolt carrier/op rod assembly, bolt, barrel, and mag.

While the SIG556 was midway through its product life cycle, evolving into the configurable 556xi, what was to become the MCX began development in response to a government contract looking for a low visibility assault weapon (LVAW) chambered in 300 Blackout. The two products were developed in separate silos. The former was a commercial product line extension; the latter, a product meant only for the military market. Yet, both grew into configurable, multicaliber, short-stroke piston platforms that would each sprout a viable 7.62 x 39 offshoot.

As the LVAW matured into the MCX platform, the Highlander principle played out and the company shifted development and production resources to the more popular platform. The 556xi, and its nascent 7.62 x 39 Russian configuration had to die in order for the MCX to fulfil its destiny.

There are few reasons for 7.62 x 39’s popularity. One is its worldwide ubiquity. Another is its performance against vehicles. Like all ammo in the past decade, x39 ammo prices have been on a rollercoaster. SIG’s putting out the MCX Russian as the price of x39 in the U.S. seems held at a tolerable, if not historically agreeable, level. So the timing of the domestic release makes economic sense.

But, we’re guessing foreign military sales is where the MCX x39 is going to shine. There’s gotta be mountains of 7.62 x 39 in onetime Soviet allied nations. Some of those nations are joining NATO and their military forces are likely interested in a rifle platform that allows the use of both stockpiled 7.62 x 39 ammo and newly acquired 5.56×45 NATO with only an armorer-level parts swap needed for compatibility.

The economic benefits of running the x39 round are pretty straightforward, but there’s also a specific performance dimension to consider. Military and law enforcement types working around cars will tell you x39 is what you want. This point is affirmed by Doug Flavin, a SIG Academy senior instructor and the Academy’s armorer program manager who says, “You’re getting far greater through and through vehicle penetration with 7.62 x 39 than you are with 5.56mm. That’s unequivocal.”

Digging into the 7.62 x 39 SBR version of SIG’s modular carbine, there are only a handful of differences between it and its western chambered brethren. Mike Joslin, SIG’s assistant rifle product manager, explained what’s going on in the guts of the MCX Russian. The MCX Russian is purposefully designed so that nearly all of its parts are interchangeable with any generation of 5.56 NATO and 300 AAC Blackout versions of the MCX.

That being said, Joslin points out the parts that are unique to the x39: the operating rod assembly, bolt, barrel, and magazine.
In order to maintain the reliability of the MCX with typically stubborn Eastern European primers, the x39 version uses a heavier hammer spring and lacks the MCX Virtus’ firing pin lock. The latter is removed from the op rod assembly to maximize the benefit of the former since activating the firing pin block takes energy from the hammer. “We needed every bit [of energy] we could to get reliable ignition across the vast differences in primer sensitivity seen across 7.62 x 39 ammunition.”

Because the x39’s op rod doesn’t have the firing pin lock mechanism present on the 300 AAC and 5.56 NATO versions of the MCX, SIG changed its length to prevent the carriage assembly without a firing pin lock from running in the wrong caliber rifle. This poke-yoke measure means if the wrong part is installed, the gun either won’t go into battery or it’ll only fire one round without cycling, because the piston isn’t in contact with the op rod.

High Threat Concealment Low-Pro Gear
Preview - Bourbon: An American Man’s Drink
The most "should be famous" gunfights in history
Hidden War Book Author, John Nores, to be on the Joe Rogan Podcast