Skills and Drills: Rolling the Dice 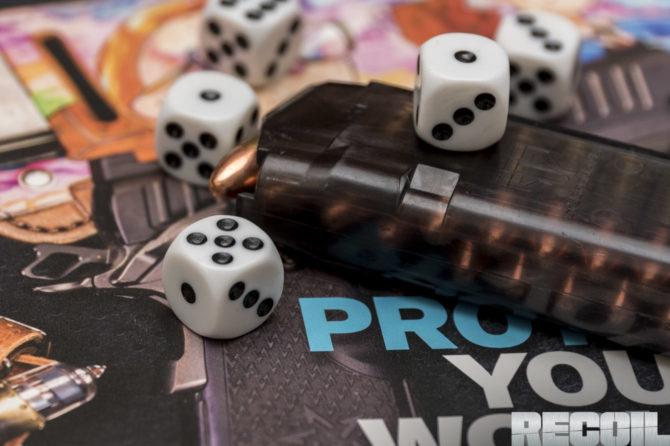 A Game of Chance at the Range

In this installment of Skills & Drills we mix things up a bit. This drill includes a randomly produced string of fire. Being able to hit a small target on command while processing other information is an important skill that needs to be continually honed — even if we don’t like to do it. No two runs of this drill will ever be alike, and it’s a lot of fun to shoot too.

First, this drill is much more fun if you have 50 rounds already stuffed into magazines; it’ll cut down on the breaks for jamming mags. As the name implies, you’ll need a six-sided die (or a smartphone app that mimics one). No, we won’t be rolling up a character sheet for a rogue mage, but rather determining what targets, sequence, and round count to shoot. The target itself includes five circles of assorted sizes, numbered one through five. Place your target at five yards. Load your pistol and orient it on a shooting bench pointed downrange. Using a cup or an empty ammo box, roll your die. Yes, we realize there are six sides per die and only five numbered circles downrange — please bear with us.

The drill ends after 50 rounds are spent.

Each round is worth two points, so 100 points are available. Simply subtract two points for every shot that doesn’t break a target line. If you shoot 90 or above, increase the distance or add one of the possible complications outlined below.
Optional Complications
– Memorize the roll results (this isn’t hard after you run the drill a few times).
– When one magazine goes dry, perform an emergency reload and finish the sequence without checking the instructions again.
– Use two dice for two sequences shot in a row.
– Shoot the drill one-handed.
– Add a par time for each sequence (start with three seconds).

Train safe, remember to post up your results on social media, and let us know how you liked the drill. When Does the Pistol Slide Start to Move?
Glock puts the brakes on the Army’s new handgun
Ethan Walters: The Gypsy Behind the Curtain
The Trailer Trash Uzi