When we opened the box containing the new Smith & Wesson Performance Center M&P 380 Shield EZ, there were more than a few audible laughs. At first glance, the black .380 Auto pistol with shiny gold accouterments looked like an airsoft replica of something that might’ve been seized from the home of a Mexican drug lord. The obvious question just begging to be answered was, “why?”

First impressions are tough to overcome, especially for highly skeptical, seasoned shooters. Fortunately, a company like Smith & Wesson, with its long history and its respected M&P line, demands a second look. There’s a line from the movie Spies Like Us, “We mock what we don’t understand.” Perhaps that line explained our sentiments all too well, because the more we understood the PC 380 Shield EZ, the less we mocked this pistol. 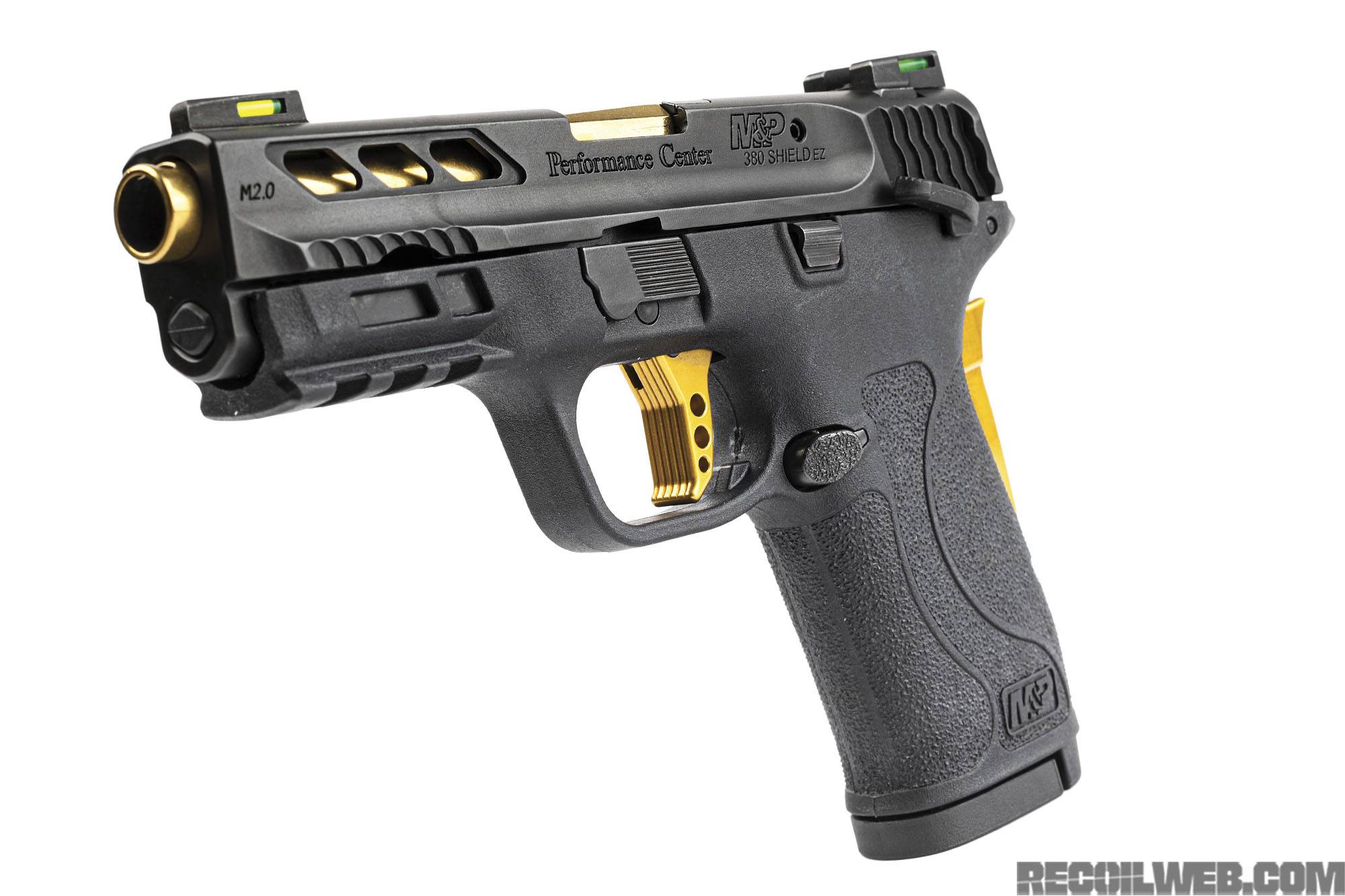 The Smith & Wesson M&P 380 Shield EZ was an addition to the M&P M2.0 lineup that baffled a large segment of the gun community when it was introduced in early 2018. Considering the EZ is almost the same profile size as a Glock 19, is chambered for a ballistically inferior .380 Auto, has what many would consider unnecessary safety features, and is part of the S&W Military & Police line, some criticism from the gun crowd was to be expected.

The problem is that most of the people who review firearms are able-bodied individuals who are comfortable around firearms and have no problem operating just about any gun they pick up. This tends to create a bias toward the ideal handgun, while the physical limitations and/or skill level of other segments of the population get overlooked.

When you get down to the gist, the 380 Shield EZ wasn’t made for people like us. Smith & Wesson had an entirely different demographic in mind when it built the EZ. We all probably know some of these people. They’re the ones looking for a means of self-protection, but don’t have a lot of gun-handling skills. Perhaps they’ve never even fired a gun before. You know, the people we’ve probably told, “just get a revolver.” Everything about the 380 Shield EZ design is intended to make it as easy as possible to operate and maintain. The foundation of the EZ is the 380 Auto caliber, considered by many to be the absolute minimum in terms of an adequate self-defense cartridge. The .380 offers a 9mm projectile with minimal felt recoil, making it a desirable caliber for shooters suffering from debilitating issues such as arthritis, or who simply lack the physical strength or stamina to deal with the pounding of a larger caliber.

What usually makes a .380 desirable to your average shooter is that it can be packed into a subcompact, pocket-pistol size package; however, those tiny guns are a real handful to shoot. The midsize frame of the EZ places the low-powered .380 into a an easily controlled platform, offering better ergonomics and enough real estate to get a solid, two-handed grip on the weapon.

The easy-rack slide has some fairly aggressive, wave-patterned cocking serrations, followed by a flange on both sides. The protrusion creates a positive purchase point that prevents the fingers from slipping off the back of the slide. Many who have difficulty racking the slide of a typical automatic pistol will find this feature, combined with the .380’s light recoil spring, makes cycling the slide much easier. A small section of front cocking serrations are present along the bottom of the slide, but they offer nothing special.

We asked a couple of older female shooters who lacked the strength to rack a 9mm slide to test the easy-rack slide and they were both able to operate the .380’s slide without any difficulty.