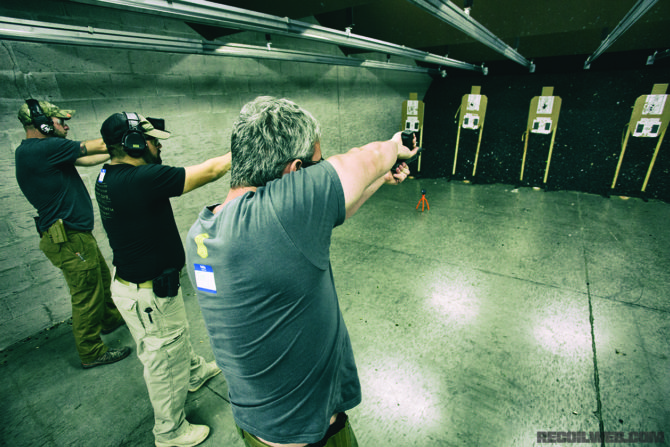 Dave Spaulding’s Combative Pistol Course and the Wisdom of Simplicity

The concealed-carry community is growing and changing. Old preconceptions of what a gun owner “looked like” have been shattered. More people from more diverse backgrounds and walks of life are asserting their Second Amendment right for self-protection and peace of mind. It’s the kind of thing that warms our hearts.

But with all these new concealed carriers out there, we fear that a generational knowledge gap has developed. New gun owners are frequently turning to the internet for knowledge. While there’s nothing inherently wrong with this, it can be a risky proposition. Besides all of the misinformation that one must sift through, there’s also a large volume of knowledge that simply isn’t on there at all.

When Dave Spaulding first started out as a law enforcement officer in Ohio, internet searches weren’t an option. So he developed his knowledge of gunfighting and violent encounters the old-fashioned way: He tracked down the people who had “been there, done that” before him. Thus began a lifelong quest for information he now imparts to other shooters through his training company, Handgun Combatives.

We recently had the pleasure of attending his cornerstone training class, Combative Pistol, while being hosted by C2 Tactical in Phoenix, Arizona. It’s a two-day class and, in the 16 hours of training time, we fired nearly 700 rounds. That’s a pretty respectable amount of trigger time with an instructor who brings nearly four decades of experience to bear in his courses. For the finer points of Spaulding’s résumé, you’re welcome to check out the Handgun Combatives website, but we’d rather use page space to focus on some of the time-tested lessons we took from his tutelage.

Those who are new to the ways of armed personal protection may be tempted to believe the internet invented combat pistol shooting. The truth is, whatever you’ve learned about fighting with a handgun in the last five years … chances are Spaulding learned it in the ’80s. Or even the ’70s. So, without further ado, here are some pearls of warrior wisdom handed down through Combative Pistol … 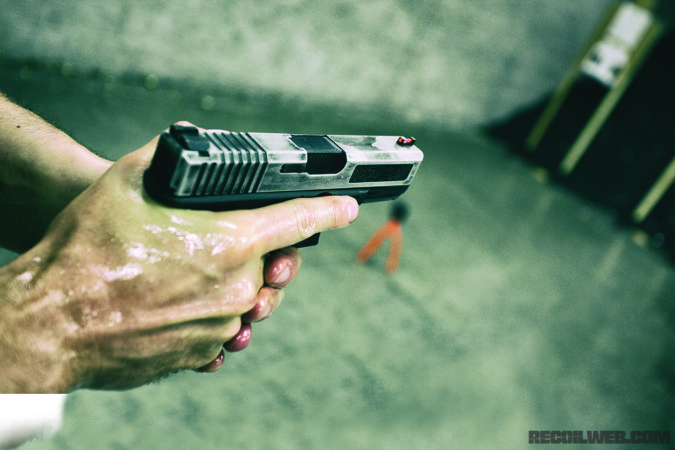 Fighting conditions are rarely ideal, so the addition of a little baby oil during weapons manipulations drills goes a long way to proofing both your skills and any weapon modifications. The silicon carbide inserts on the forward part of the author’s slide proved particularly useful during this exercise. Don’t Be a Slave to the Shot Timer!
It sounds so simple. (That’s going to be a running theme in this article.) But the age of social media, and the short-attention-span visuals that come with it, have put a premium on being fast behind the trigger. Why? Partly because of the rising popularity of competitive shooting sports. But also because it just looks so good! What’s sexier and more exciting than seeing your favorite industry personality blazing away at a 1-5, Bill drill or speed reload? The bottom line is in today’s visual world being fast looks better than being accurate.

We’re not saying you should choose one over the other. Being able to shoot the wings off the fly is no good if you can’t land hits quickly enough to save your life, and the Combative Pistol curriculum definitely pushed us to our limits on speed. Having said that, it’s important to keep speed in perspective. We see a lot of folks chasing quarter-second splits. By Spaulding’s research, the length of a single human eye blink is 0.32 second. So what’s the difference between a quarter-second split and a half-second split? Literally less than the blink of an eye. Will that make the difference between life and death? We’ll never say never but, given the multitude of factors at play in a no-sh*t fight for your life, it’s highly unlikely that your survival will boil down to your split times. It’s far more realistic that your awareness of potential threats before they present, ability to manage sudden stress, and will to fight are what will determine the outcome.

By all means, get on that clock. Drive your times down as far as you can. But understand that those numbers are a means to an end, not a singular gauge of being fit to fight.

You Don’t Get Faster by Going Fast!
Wait … what? Seriously. You don’t get fast by being faster. At least, not at first. The primary foundational building block of becoming a faster shooter is becoming a more efficient shooter. This is a principle many of our staff have been training with for years, and it’s only reinforced by the fact that Spaulding, in his own experience, has come to this same conclusion. The idea is to eliminate any excess movement from whatever you’re doing. Drawstroke, reload, malfunction clearance, ready positions — all require movement of the body to get the gun doing what we want. The question becomes how much movement it requires versus how much movement we’re actually doing to execute the process. 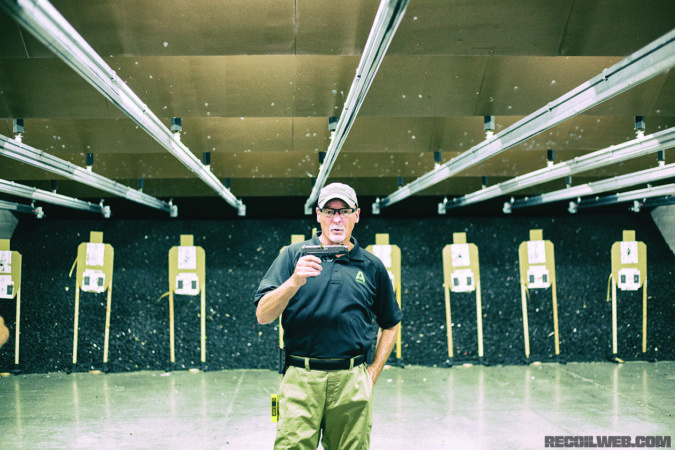