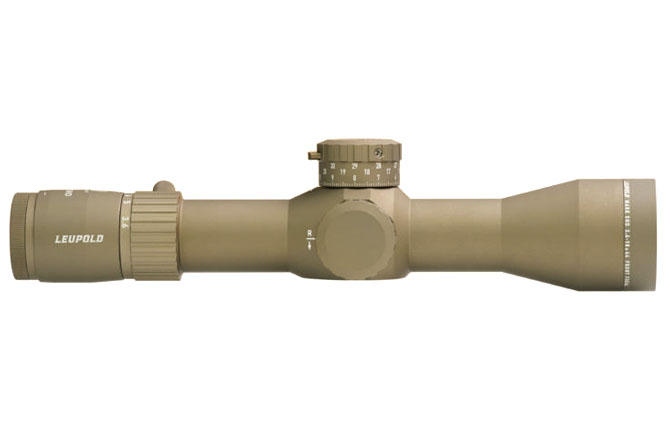 Leupold is jumping back into the military optics game with the Mark 5HD 3.6-18X44 mm rifle scope. Leupold had long provided the USMC with optics for sniper rifles and designated marksman's rifles. Now big Army has announced they will be outfitting their M110 with the Mark 5HD. This isn't strictly an off the shelf option, and the Army's Mark 5HD will feature a proprietary flat dark earth coating and the Army's own patented Mil-Grid reticle.

“The men and women of the U.S. armed forces require and deserve the very best, and when it comes to riflescopes, that's the Mark 5HD,” said Bruce Pettet, President, and Chief Executive Officer for Leupold & Stevens, Inc. “Our optics face strenuous durability testing, and fully meet the extremely high-performance standards that the military demands.”

The Mark 5HD is produced at the Beaverton, Oregon factory. The Mark 5HD is a first focal plane scope that weighs 26 ounces and is a hair over a foot long. The eye relief is a generous 3.86 inches and has a 28.4-foot field of view at 100 yards at the lowest magnification setting.

The 3.6-18 is an interesting magnification range. The lower 3.6 magnification makes a bit of sense on a semi-automatic sniper rifle. It allows soldiers to engage at closer ranges and still have a modicum of speed for shooting within 50 yards. The M110 is a cool rifle, and they've been used to great effect in the war on terror. The Mark 5HD scopes seem to be well suited for the M110's mission set and capability.

The new Mark 5HD will be replacing an older Leupold scope that was originally issued with the M110. The old Leupold Mark 4 LR/T gave users a 3.5-10 magnification range. The new Leupold optic is giving the Army a lot more magnification at the cost of only four extra ounces.