The Bowers Vers9 submachine gun can Firing an Uzi SMG on full auto is one of life’s simple pleasures. In fact, we think it's the most fun you can have with your clothes on. It’s even better when you can run said subgun with a silencer. Some shooters thread their Uzi barrels and run a full auto rated pistol silencer such as an AAC TiRant, Gemtech Multimount or Silencerco Osprey. Another route to go is by installing a tri-lug barrel and using a KAC can or something of that nature designed for an MP-5.

Our good friends at Silencer Shop advised us that while any of our pistol cans would work, the only way they could be used would be by threading the barrel on the Uzi. We didn’t really want to go that route, particularly since the full auto setting would guarantee that the can would loosen up and end up with a baffle strike or worse.

We turned to the Bowers Vers-9 that uses the old school method of a mount that replaces the barrel nut for increased stability. The last thing you want to happen while running a pistol can on an Uzi is for it to unscrew and launch itself down range while in mid burst!

They sent us a pair of Uzi silencers to test out made by the Bowers Group of Cornelius, Oregon: The Vers9 and the Vers9S.

This review will center on the longer version, the Vers9. Check out the review on the shorter can over at ammoland.com.

About the girl what brung us We're not sure what the Hebrew markings literally say, but assume the first (full auto position) means “Happy Birthday”!

A real Uzi SMG as opposed to a conversion piece is rarer than hen’s teeth. Foreign made machine guns (with few exceptions for police and military) were banned via the Gun Control Act of 1968. The 1986 Hughes Amendment to the Firearm Owners Protection Act banned further conversions of legal semi autos to civilians. We were fortunate to find one of the few legal Uzis manufactured as an SMG as opposed to a conversion piece. Hence we didn't want to mess with tri-lug barrels or anything else to ruin its historical authenticity.

Bowers’ Vers9 is designed with full auto firearms like the various HK MP5 variants, Uzis, Macs, Stens, Calicos and other 9mm sub guns in mind. The only issue with a semi auto Uzi and the Bowers can is that the Uzi will need to be converted to a short barreled rifle through the NFA (National Firearms Act) process. Make no mistake, this is a high volume silencer. Sound suppression makes it completely hearing safe and the can is rugged enough to handle 300 Blackout and 300 Whisper rounds with velocities up to 2200 fps. Consequently, the supersonic 9mm rounds will not damage this piece as it might have on older 9mm subgun cans that relied on wipes for suppression.

In the video the first silencer is the VERS9S, the second is the VERS9, the louder shots at the end are 115 grain supersonic 9mms fired through the can.

Beauty is in the eye of the listener

The Vers9 is on the long and heavy side. We did not notice a significant difference in sound levels between the two, but if metered we are sure that the longer can will end up being a little bit quieter.

We don't typically test silencers with a sound meter for the simple reason that sound quality can change on too many variables. Let's face it, at the end of the day when you’re sorting brass, cleaning guns and reflecting on the day’s activities you won’t find yourself saying, “By George, that can sounded more in the 126Db threshold as opposed to the 130Db range.”

That number is meaningless to most of us unless you're an OSHA Inspector or silencer manufacturer; we judge our cans based on how it sounds to our ears. Scaling cans from a scale of “suffering a mild hearing loss” to “today I can’t hear a thing out of my right ear”, most silencers do the job fine for me. There are exceptions; 40 S&W always sounds louder or so annoying through a can that we no longer enjoy shooting it suppressed. 9mm on the other hand actually sounds richer when fired through a 45 can.

As versatile as it is, the Bowers Vers9 is for the NFA domain, if you want something to put on your threaded pistol barrel, you should look for a pistol can as the VERS9 will turn even the best of them into a Thompson Center Contender with regard to rate of fire due to the weight.

If you’re looking to shut up your Uzi, HK, Sten, etc. you will find a honey of a silencer in the Vers9. Multiple full auto 9mm hosts are not a problem with this system, either as Bowers specializes in these types of mounts. A number of inserts are available to run the VERS9 on just about any firearm ever made.

It will work with 300 Blackout, but so will most other silencers designed for 9mm pistols, 308 rifles and of course 300 Blackout that tend to be lighter. On a 300 Blackout, the VERS9 makes for a very heavy, yet effective can!

RECOIL Senior Editor Patrick Vuong during a secret counter terror mission on the island of Madripoor;
He'd have been better off with one of these cans.

There are no unobtanium materials, robo-welded monocore baffle stacks or anything special beyond the proven technology that Bowers has become known for in the NFA realm. Bowers Group has been around for close to 20 years and their customer service ranks among the best in the industry.

Additionally they offer a full line of suppressor covers that will fit the competition’s cans as well.

We did not try these on the VERS9 or VERS9S, but have run them on two of our AAC cans: a 556SD and a 762SD. Ironically when shooting a newly built pistol in 300 Blackout, we moved our hand to the can to gain some warmth. The Griptastic cover was as cold as our hands were after 200 rounds, so they work extremely well. The Griptastic suppressor covers work a little too well, on a cold day when you forget your gloves your silencer can no longer be used as a “hand warmer.”

Between the two, we prefer the VERS9S as it offers near identical performance in a slightly shorter and therefore lighter package.

Besides, the longer one won't make it into our AKases custom case: 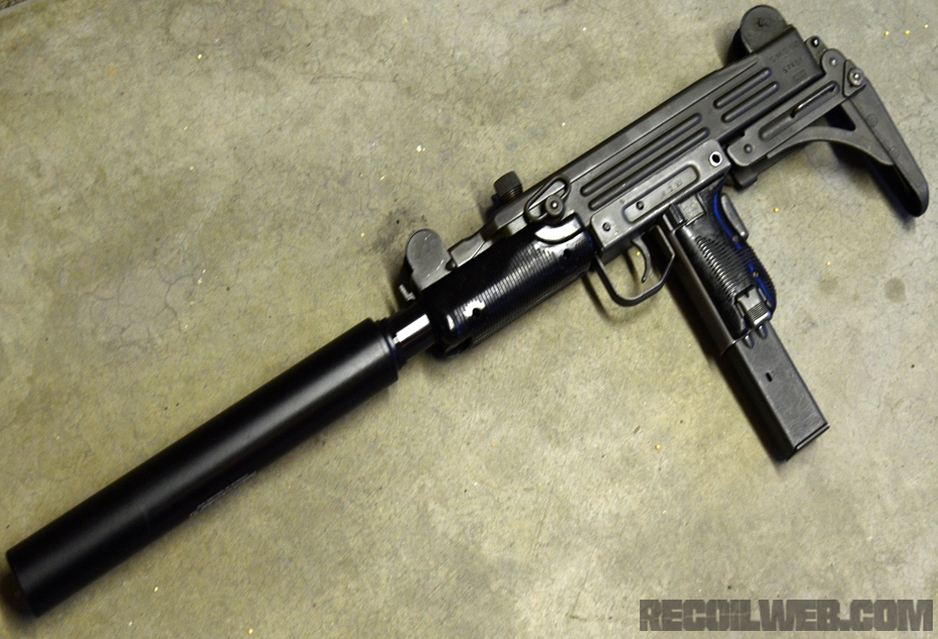