Many people can go their entire lives without knowing eye dominance exists. No one needs to identify a dominant eye for reading, walking, watching television, or scrolling through social media feeds. The few areas of life where eye dominance is an issue are optometry and sports that require alignment between multiple objects along a narrow visual plane. This would include pistol shooting.

It usually doesn't take new shooters long to discover they may have eye dominance issues. They may attempt to line the sights of their handgun up with the dominant hand and seem to be seeing two guns floating in front of them. From an observer or instructor's point of view, the shooter might be bobbing their head or moving it around as they attempt to find the sights in their visual plane.

While good instructors can be instrumental in diagnosing shooting errors that might be contributing to shooting problems, eye dominance could also be the culprit.

If you've found yourself struggling with your eye dominance, here are some do's and don'ts to take a look at:

DON'T ASSUME EVERYONE HAS A DOMINANT EYE 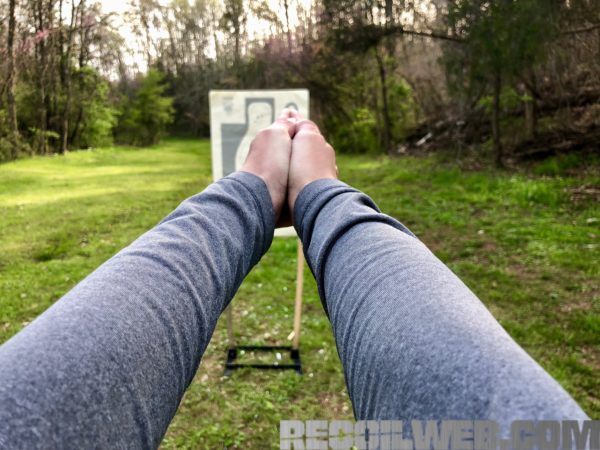 When alternating closing eyes, your dominant eye will remain in line with your fingers and your target.

Eye dominance can also be affected by fatigue, illness, age, changes in vision, cataracts, and glaucoma. If you're concerned about your vision you may want to talk to your optometrist or ophthalmologist about your shooting and what your eyes are expected to do in that process. This may help guide your corrective lens prescription or identify other hindrances to your vision. While looking through your non-dominant eye, your fingers will appear off to the side of your intended target.

If your eyes are healthy, your prescription is current, and you still find yourself struggling with your sight picture or experiencing new visual focus issues while shooting, consider conducting an eye dominance test.

The best eye dominance tests involve using both hands so your dominant hand cannot influence the test. Hold up a card with a hole roughly the size of a quarter cut in it, or bring both index fingers together. Extend your arms and point with both fingers or look through the hole in the card at a distant target object that is also relatively small in size such as a doorknob or coffee cup placed on the other side of the room. Alternate closing one eye, then the other. 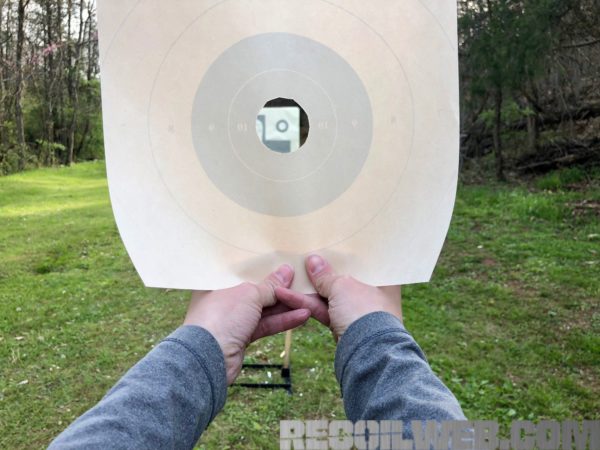 While looking at your target through a small hole, alternate closing each eye. Your dominant eye is the eye with which you can still see your target.

Your dominant eye will be the eye that remains in line with your target object and your fingers. If you are using the card method, you will still be able to see your target. If you close one eye and your fingers are offline of the target or you can no longer see the target through the hole in the card, then you have identified your non-dominant eye. 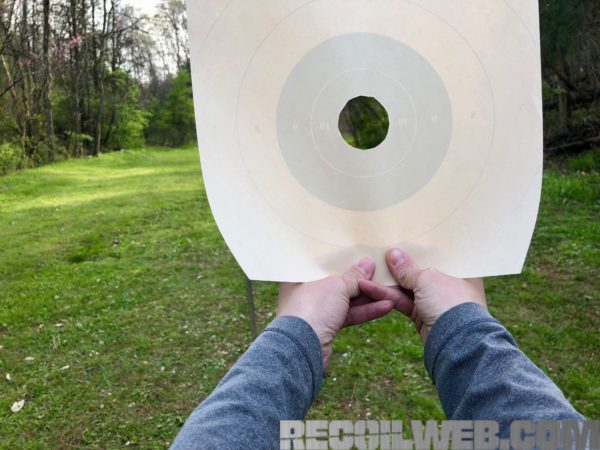 While attempting to view a target through a small hole with your non-dominant eye, the target will no longer be visible.

If you do this test more than once and identify that your dominant eye is consistently opposite your dominant hand, congratulations! You are cross-dominant.

The sights you choose for your handgun may be specific to other shooting goals, but if cross-dominance is your issue you may consider a wide-notched rear sight coupled with a high visibility front sight. The addition of a Mini Red Dot Sight (MRDS) or grip-activated laser can also help for eye-dominance and other vision-related issues.

DON'T BE AFRAID TO CLOSE AN EYE

While shooting with both eyes open is preferred, if you're struggling to get a good sight picture and adequate accuracy, you may benefit from briefly closing an eye. You can open it again immediately for the additional information it will provide. This might also be a good technique for more difficult shots where you want to limit visual distractions. It may be the best and most consistent option for those without a specific, dominant eye; those with intermittent dominance; or for those who want to shoot with a specific eye.

Some find that partially obstructing an eye with clear tape, Vaseline or chapstick can help them train their dominance while still maintaining peripheral vision.

DO USE YOUR DOMINANT HAND

Brought over from the world of long-gun shooting, some cross-dominant handgun shooters are told they need to switch hands. This is unnecessary. While it's important to practice non-dominant hand shooting from time-to-time, unless you are truly ambidextrous and have no degradation of dexterity and strength between hands– keep your dominant hand as your primary vehicle for shooting a pistol. Turning the chin toward the dominant bicep will put the non-dominant eye in line with the sights. One can alter his stance by extending the arms under the dominant eye, biasing the gun to that side.

Give yourself permission to experiment with your vision, your stance, and your equipment. Work the different techniques in dry-fire to find what works for you and to make it a consistent part of your practice. Whether it be a single solution or a combination of several your cross dominance issues don't have to hold you back from achieving your shooting goals. Canting the gun slightly to the side can help align the sights with the dominant eye.