The adoption of the Sig Sauer M18 by the USAF brings to an end a little known chapter in the history of military handguns: the retirement of the last standard issue revolvers in the U.S. military's inventory. The first units to receive the M18 pistol will be the Air Force's Security Forces units, responsible for law enforcement, installation security, and ground airbase defense. Among those units are the USAF's Military Working Dog (MWD) teams, who to this day still use the last military revolver: the Smith & Wesson Model 15.

The Model 15 remains in service with MWD teams as a training aid, even after being retired from general service in the early 90s. Currently, it's used in conjunction with blanks to train MWDs to acclimate to gunfire, as well to detect firearms by scent. The Model 15s that will eventually depart the USAF have been in service since 1956 when they were originally purchased for the Strategic Air Command's Elite Guards.

Despite their cool name, the Elite Guards were regular Air Force Air Police members who wore cooler looking uniforms than everyone else, and of course worked at SAC bases. In 1962, the USAF's Security Police program was still referred to as Air Police, and the disparate missions that Air Police was tasked with caused them to have a hodgepodge of sidearms in inventory.

Many units had non-standard K-frame revolvers, others had WW2 and Korean War vintage 1911s. As the USAF built out the Security Police program, it standardized the sidearm on the Smith & Wesson Model 15 Combat Masterpiece in 38 Special. Guns on the USAF contract were identical to the consumer guns, with the addition of “USAF” engraved on the frame. The Model 15 was in continuous service with the Air Force Security Police, now Security Forces until some point in the early 90s. It was phased out in favor of the Beretta M9. Again, it's difficult to tell exactly when, however some records show Combat Masterpiece revolvers in Security Forces holsters as late as 1992. 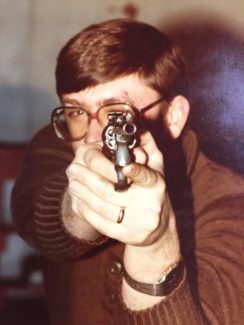 After 1992, a few revolvers stayed around in the hands of Security Force's K9 teams. Because of a quirk in the Air Force's regulations, any base that had a Model 15 for blank firing also had to have an identical model in that base's Combat Arms shop.

Combat Arms in the Air Force is tasked with all maintenance and instruction on USAF small arms. Of course, because they're K-frame revolvers, the Model 15s received little maintenance over the decades. I had the chance to fire one, with blanks of course, during a short tour at Osan Air Force Base in Korea in 2016. The gun I fired had been parkerized like many of the original models, and was still perfectly functional.

The trigger pull was exactly as I'd expect from a Model 15 produced in the 60s – heavy but smooth as butter. It really was a wonderful piece of machinery with a fascinating history.

Sadly, a lot of that history is lost to the ages. The Air Force didn't always keep the best records, and when the Combat Masterpiece was phased out for the M9, many of the guns were destroyed.

A few leaked out to the secondary market here and there, but for the most part they were either destroyed, or in some cases sold to allied countries. Hopefully, the few that are left will get released to the CMP, much like the old 1911s finally did. I know there are retired Security Forces members out there would love to get their hands on an old Combat Masterpiece.

There's also at least one currently serving member who would, as well.By 2021 the Air Force will have completed force-wide adoption of the Sig Sauer M18. Like the guns that preceded it, it represents the best pistol technology available at the time of fielding, and I have no doubt it will serve me well. 2021 will then bring an end to the 65 year military career of the Smith & Wesson Model 15. It's a shame to see them go.

I would like to acknowledge the assistance provided by active duty and retired members of the USAF Combat Arms Instructor community in providing images and information for this article. – Caleb