The Guns of Black Hawk Down The film Black Hawk Down has left an indelible mark in the minds of United States military members and gun enthusiasts alike. The movie recounts the story of Operation Gothic Serpent, involving the Task Force Ranger mission on October 3 and 4, 1993. Released mere months after Sept. 11, it was one of the first film depictions of urban combat in a post-Operation Desert Storm world.

Firearms for the film were provided by lead armorer Simon Atherton (whose film credits include The Killing Fields, Aliens, and Saving Private Ryan) with the assistance of U.S. Navy S.E.A.L. veteran and military film advisor Harry Humphries.

When discussing film props, the term “hero” is used to describe the main prop weapons used by the lead characters in the film. Hero props are frequently used in close-ups and often garner the most screen time, becoming publicly recognizable or sometimes iconic.

Ironically, many of the M16s and CAR-15s used on screen were actually built as an export variation of the Colt M16. Simon Atherton, Black Hawk Down lead armorer and owner of Zorg Limited, provided examples of M16s and CAR-15s used in the movie. The CAR-15, notably, was configured with components used on the backup Gary Gordon hero prop rifle. 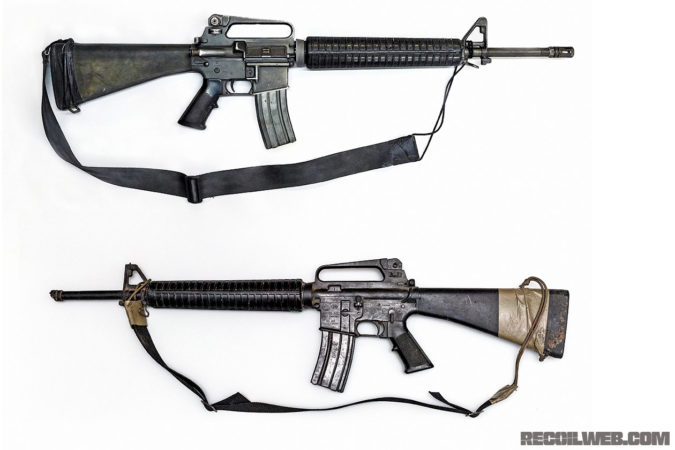 The 3/75 Ranger M16A2s. The blank-firing M16A2 (top) was an export M16A2 from Guatemala manufactured by Colt and redressed for The Green Zone. The rubber dummy prop (bottom) was used in the production of Black Hawk Down and carries the distinctive green duct tape used to recreate the Rangers’ weapons.

The blank-firing M16A2 in these photos was, in our best estimate, used as a Third Battalion, 75th Ranger Regiment rifle. It’s nearly identical to the rifle carried by real-life Ranger Matt Eversmann, played on screen by Josh Hartnett. The Ranger M16s were ex-Guatemalan military M16A2s fitted with slings secured with green duct tape. The blank-firing M16 has been photographed, for comparison, with one of the rubber dummy rifles, still configured as used on set for Black Hawk Down. 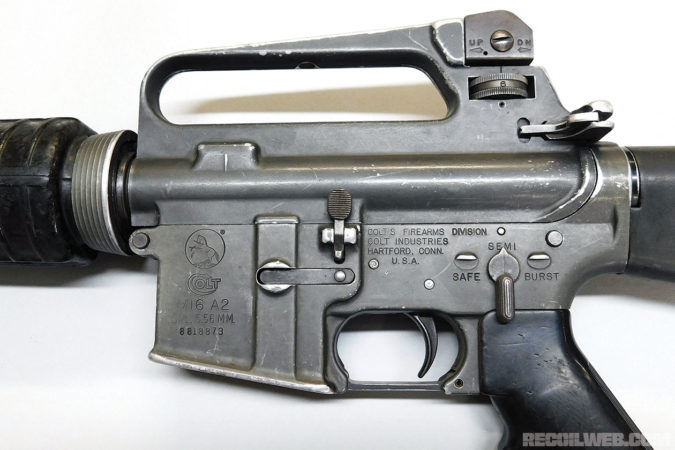 M16A2 Export Lower. The Guatemalan export M16A2 was configured with the M16A1 style lower emblazoned with Colt M16A2 roll marks as pictured. The fire control group markings were stamped on both sides of the lower (which is the common configurations for M16A2s) but with a BURST marking replacing the more common AUTO marking.

The rubber dummy prop M16 shows the on-screen configuration for Ranger M16s. Although the dummy’s M16A1 “slab side” lower is slightly different than the blank-firing prop — cast from a civilian Colt HBAR Sporter — it’s similar enough to pass unnoticed to most viewers. The M16A2 barrel conversion. Photo by Jon Davey. Most CAR-15 rifles were modified M16A2 rifles. This barrel was cut to approximately 10 inches and the front sight post was moved back to accommodate the modified handguards, while retaining the traditional triangular M16A2 handguard cap.

After receiving the M16s, Atherton’s team converted many of the ex-Guatemalan Colt M16A2s into CAR-15s. The Gordon CAR-15 blank-firing prop is the most iconic weapon in the film. Chris Atherton, Simon Atherton’s son and Zorg employee, was able to immediately locate the last known surviving Gary Gordon hero blank-firing prop CAR-15.

Master Sergeant Gary Gordon’s Colt Model 723 was represented in the film by a Guatemalan export Colt M16A2 modified into a carbine configuration similar to a Colt Model 727. The most significant visual difference between the Colt 723 and Colt 727 is in the rear sights. The Colt 723 uses an M16A1 sight, while the Colt 727 is fitted with a blockier “movable” sight. To produce the prop, the M16’s 20-inch barrel was cut to approximately 10 inches and the front sight post was moved back. A commercial two-position buffer tube and stock were also added. A 5-inch section of the center of the M16A2 handguard was removed to construct improvised carbine handguards. As a result, the handguards have eight holes (instead of the six- or seven-hole handguards found on production 723 and 727 carbines). This rifle, and many other of Atherton’s CAR-15s, retained the triangular M16A2 handguard cap instead of the circular handguard cap found on Colt-produced carbines. 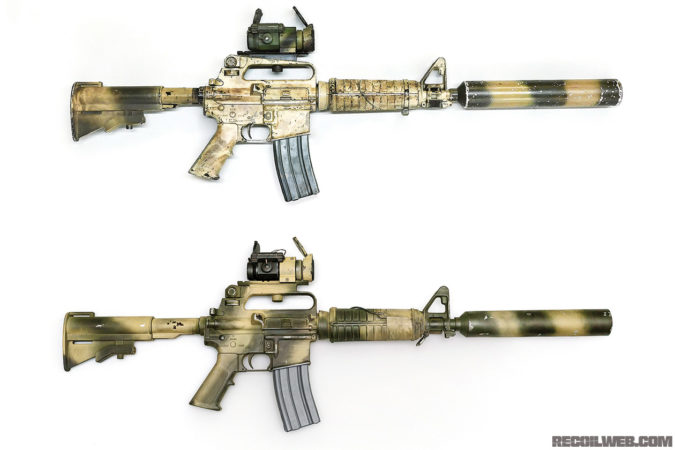 The Gordon CAR-15 blank-firing prop and replica. The Gordon blank-firing prop (top) is fitted with a commercial stock and fake suppressor that carry the original paint scheme used during production. The rifle was subsequently used as the on-screen hero prop in Blood Diamond. The live-fire replica, manufactured by Enhanced Tactical Arms, (bottom) features a fully functional OPS Inc suppressor. The image of the semi-auto replica has been Photoshopped with BURST fire control markings and a full auto sear.

Analysis failed to confirm that the specific stock and dummy suppressor in the photos appeared on screen, but the paint scheme on those components leaves no doubt that those parts were used on an authentic Gordon hero prop. Although it’s impossible to confirm that the CAR-15 pictured was one of the Gordon hero rifles, it has been confirmed that this weapon was later used by Leonardo DiCaprio in Blood Diamond. The Zorg staff indicated that the rifle may have been repainted in the current tan paint scheme for the film The Green Zone. The Gordon CAR-15 blank-firing prop 8-hole handguard. The 8-hole CAR-15 handguards were manufactured from full-length M16A2 handguards when many of the M16A2s were configured into the CAR-15 configuration.

This CAR-15, manufactured by Enhanced Tactical Arms in Las Vegas, Nevada, is a replica of the on-screen prop representing Master Sergeant Gary Gordon’s CAR-15 — a replica of a replica, as it were. These images were Photoshopped to represent the rifle in its Class III configuration. The replica is fitted with an Aimpoint CompM red dot optic. The Gordon CAR-15 prop rifle 8-hole handguard. The ETAC Arms live-fire replica is equipped with an 8-hole carbine handguard constructed from an M16A2 full-length handguard and a Surefire tactical light. The duct tape and zip tie matches the configuration shown in the film.

Although Aimpoint 3000 and 5000 optics were used during the real-life operation, they were out of production by 2001. Filmmakers selected the CompM, fitted on a B-Square Mount with a 30mm Weaver split ring mount, as a substitute. The dummy suppressor used on the hero prop wasn’t available, so an OPS Inc. suppressor was used in its place. Although Zorg provided access to the Gordon CAR-15 prop, they indicated that the props used to represent Sergeant First Class Randall Shughart’s M14 were rented from Gibbons Limited and returned after filming. 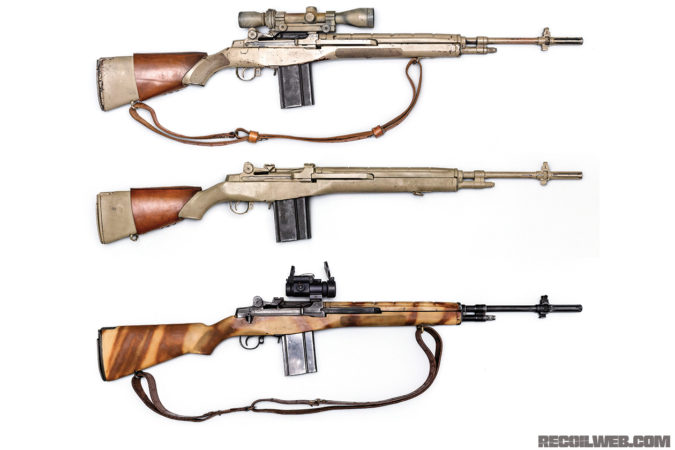 The Shughart blank-firing props were Federal Ordinance MDL.M1As provided to Simon Atherton by Mike Gibbons. Gibbons sold the eight MDL.M1As to Independent Studio Services in 2008 or 2009. The ISS armory staff indicated that it was likely that the two tan weapons were used as the hero props in filming. Photo analysis by William DeMolee indicates that it is likely that the top MDL.M1A, which is equipped with a Leatherwood scope, was the hero prop used in close-ups. The live-fire replica was painted to match onset production photos and screenshots by Augee Kim.

Mike Gibbons, owner of Gibbons Limited Entertainment Armory provided eight Federal Ordinance MDL.M1A rifles to the production. Mike revealed that the weapons used to represent Shughart’s M14 were sold to Independent Studio Services between 2008 and 2009. Kate Atherton from Zorg provided specific serial numbers for the eight weapons used in the production. Travis Pierce, Enhanced Tactical Arms M14 Subject Matter Expert, then used these serial numbers to determine that most of the rifles were produced in the ’90s. Refinished stock from the blank-firing hero M14 prop. The fire control selector switch cutouts on the tan Federal Ordinance MDL.M1A have been filled in and the external surfaces refinished. Almost all traces of spray paint had been removed. 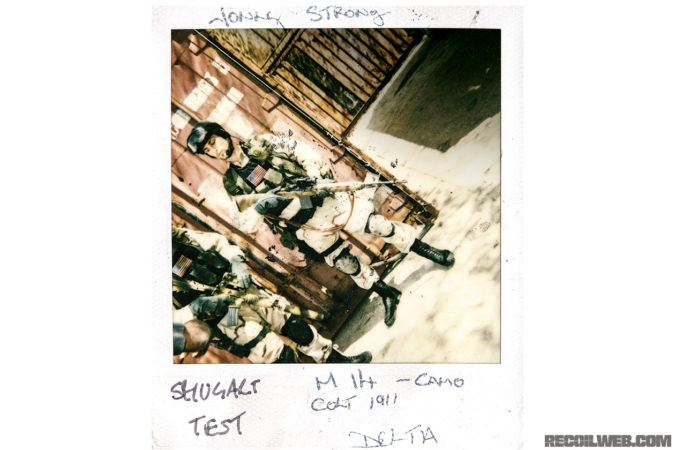 This production Polaroid photo of actor Johnny Strong, in his role as Sergeant First Class Randall Shughart, shows both, one of the hero M14s used in filming and another glimpse of the Gordon CAR-15.

The Norm “Hoot” Gibson CAR-15 rubber dummy prop, built as a rubber stand-in for Eric Bana’s blank-firing carbine, is an iconic prop worthy of special attention. The rubber dummy, cast from a semi-auto Colt AR-15A2 Carbine with a removable carry handle, was used on-screen in the close-up of the “This is my safety” scene. The prop was weathered with water-soluble aging spray and is fitted with a sling constructed from a piece of strap taken from a parachute lowering line assembly, looped through 550 cord and secured with black polycloth laminate tape. The rubber dummy used in the close-up of the “This is my safety” scene shows significant differences from the live-fire prop. These include the type of handguard, delta ring, castle nut, stock, lower, and carry handle configuration. The lighting and camera angle make the differences difficult to detect as the story unfolds.

The live-firing prop replica, constructed by Enhanced Tactical Arms, was created using screenshots from the film, production photos, and the Hoot rubber dummy carbine as references. Although the Colt Gray lower on the Hoot CAR-15 appears to be an export M16A2, the black upper is distinctive. The Hoot blank-firing CAR-15 is configured with a 14.5-inch barrel, six-hole handguard, circular handguard cap, flat delta ring, and M16A1 birdcage flash hider. The Hoot live-fire replica. The Hoot replica, which is similar in general configuration to a Colt 727, weighs in at slightly over 6 pounds and is as reliable and accurate as a modern M4. The helmet, goggles, and American flag were props used during production in 2001.

When we asked Mr. Atherton if the rifles used in the film were painted using an airbrush he laughed, indicating that the rifles were painted quickly, using techniques recommended by military advisor Harry Humphries. 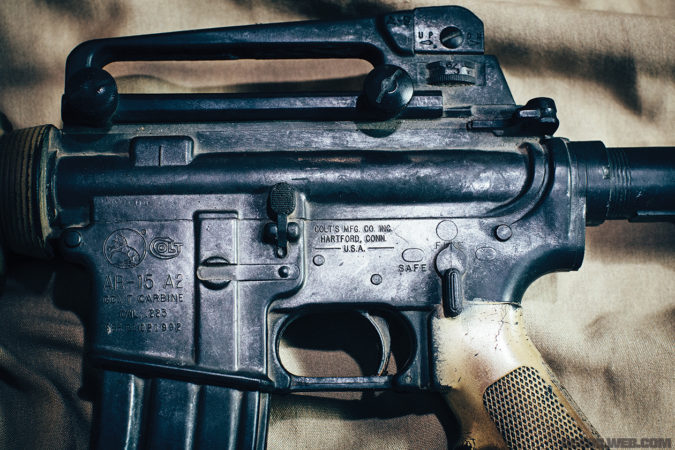 The Hoot “This is my safety” rubber CAR-15 dummy. The Hoot character is reported to be a composite of several Special Forces veterans involved in Operation Gothic Serpent.

Black Hawk Down is one of the first films to capture post-Vietnam warfare in a realistic manner and set the standard for how modern warfare (and weapons) would be represented in film. When discussing the long-term impact of the film in a 2013 interview, First Sergeant Matt Eversmann (U.S. Army, retired) stated, “…what I’ve found over the last decade is that, there are a lot of folks that really aren’t touched by the war on terror … watch Black Hawk Down and you have a really fair, accurate, and pretty authentic view of what urban combat is like … it is the reference point, both the book and the movie, that people are going to look at when they talk about getting involved in these type of conflicts in these countries we’ve never heard of …”

This endorsement, in conjunction with the pair of Academy Awards earned in 2002, illustrates why the film continues to receive praise from many film aficionados and military veterans nearly two decades after its release.

One response to “The Guns of Black Hawk Down”