Q’s Honey Badger was released over two years ago to an eager market who just couldn't get enough of the gun. Its DNA can be traced back to a time when Kevin Brittingham and Ethan Lessard were still with AAC and 300 Blackout was a relatively new cartridge. Ultimately, other than a few prototypes and submission guns, the Honey Badger never came to fruition under the AAC brand.

It was not until 2017 that the Honey Badger emerged from its burrow under the Q brand with some new looks and updated engineering. While several versions have come and went (.556 and 16” guns are no longer available), there has been one noticeable trend. According to the company, the gun can’t be built fast enough. Additionally, the price point of $2,399 (for the pistol) has placed it out of reach for some of the younger crowd that Q finds itself attracting to its brand. Enter the Sugar Weasel. Brittingham and his team determined there was a market for a “poor man’s Honey Badger” and developed a gun to fit the bill. At a glance, it's hard to tell the differences between the Sugar Weasel and Honey Badger. They both share the same clear anodizing which turn the receivers an attractive gold color. The Sugar Weasel also uses the same barrel (chambered in 300 Blackout), gas block, handguard and Cherry Bomb muzzle brake found on the Honey Badger. On top of the cosmetic appearance, the weight and OAL length of the gun (while the braces are collapsed) remain similar as well. The Sugar Weasel weighs in at 4 lbs and 7 oz with an OAL (with the brace collapsed) of 22.25-inches while the Honey Badger checks in at 4 lbs 7 oz and an OAL (with the brace collapsed) of 20-inches.

Both guns are optimized for use with sub-sonic ammunition in conjunction with a silencer or super-sonic ammunition with or without a silencer. Given that Q is also in the silencer game, equipping the Sugar Weasel with a matching can is as easy as adding it to your shopping cart. 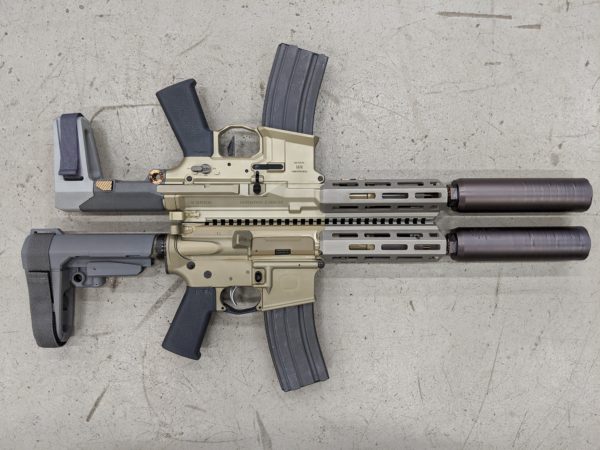 That’s where the similarities end. The Sugar Weasel is built on a forged receiver set, rather than a billet, which was custom milled to remove the forward assist, shaving weight. Rather than using Q’s proprietary two-position collapsing brace, receiver extension, and bolt carrier, the Sugar Weasel is set up with a standard buffer tube and Q branded SBA3 6 position adjustable brace. Other minor differences include a standard safety selector, clear anodized standard charging handle and ALG ACT trigger.

Q has been teasing the Sugar Weasel for some time. Having had the opportunity to stop by the facility to get a look at the gun first hand, there are some reasons that Q hasn’t started to just pump out guns to consumers. The amount of testing and data collection that Q’s engineers engage in prior to releasing a firearm is staggering. While it makes perfect sense, it's something that many, including the author, probably never thought about.

While visiting Q, the author accompanied Q’s team to the range in order to collect some data for the gas block’s adjustment settings and different types of ammunition. It was explained that the purpose to was to find the minimum threshold that the bolt would consistently lock back while utilizing inexpensive ammo in order to determine whether there was enough adjustment remaining in the gas block. Put another way, shoot some of the cheapest ammunition that is commercially available in large quantities in order to make sure the guns work consistently to prevent firearms from coming back to the facility for cycling issues. There have been other restraints as well, including the parts supply chain. The results of the clear anodization process should be mentioned. Unlike billet receivers, forged receivers have impurities in the metallurgical content due to the forging process. Since no dye is added during anodizing, any imperfections or impurities in the metal are more readily seen through the clear anodization. Unfortunately, it's something that cannot be avoided but is only cosmetic in nature. That’s why Krylon exists anyway…