Dressing up an SKS rifle as a Chinese Type 84, only better.

The SKS Rifle Hits the U.S.

The year was 1999 and the SKS rifle had had a good run. Soon, the developed world would supposedly come crashing down, as computers across the globe would cause rolling blackouts due to a simple date error: Yes, ladies and gentlemen, we’re talking about Y2K.

OK, we know this article isn’t carved onto a cave wall, and that nothing much of substance happened at the turn of the millennium sans a few unplanned pregnancies. However, this article is a little bit about that, because it was also the last calendar year the SKS rifle could be considered a pragmatic or practical choice for offensive use (in the United States at least; sorry, Canada).

Though there are variations and models from nearly a dozen separate nations, your standard fare SKS was a semiautomatic, 7.62x39mm, 20-inch barreled affair that fed from an internal 10-round magazine. Loading and reloading took place with stripper clips. Many were imported with folding bayonets that couldn’t be quickly removed from the rifle without the use of tools.

They were inexpensive and readily available, which goes a long way to explaining their popularity in the United States. Hell, an entire cottage industry was invented seemingly solely to peddle awful accessories. Some of these efforts were attempts to address the shortcomings relative to modern rifles, and some left us just sadly shaking our heads. Chassis systems. Folding stocks. Wobbly railed top covers. Weird ugly duck billed removable magazines — you’ve seen them all, of that we’re certain.

Remember, this was a magic time when the mantra, “Get whatever AR-15 that you want, provided it’s made by ABC: Armalite, Bushmaster, or Colt,” was mostly true. A cheap SKS rifle was roughly the tenth of a price of a Colt.

Ultimately, the American heyday of the SKS was extinguished for exactly the same reason the Russian one was: the increased availability of the AK/AKM. Long gone is the time when you’d buy an SKS for practical reasons, solely consigned instead to nerdy Com-Blok collectors.

To the Russians, the SKS was a bit like the American M14 — an awkward middle child, never heavily fielded for any significant period, and largely relegated to the rear. Sure, you’ve seen some shiny ones all dolled up for parade across the iron curtain, but that’s the most common use for it now.

The same couldn’t be said of Red China. When they received the official tooling from Tula Arsenal in the ’50s, they embraced it. For nearly three decades it remained their go-to, mass-issue rifle. While they spent some time dabbling with new designs in the early ’70s, it wouldn’t be until the far-superior Type 81 Assault Rifles were fielded in the ’80s that SKSs began to drop off the scene.

It’s been said that the People’s Liberation Army prized the accuracy of the SKS rifle; if that’s true, their measuring sticks must have been made in China as well. Rather than allowing the AK to replace the SKS wholesale, the Chinese military treated them as complimentary weapons — with some hybrids along the way. While the SKS-M looks baller with a bakelite, we can’t ignore the beauty with the bayonet. One such Moreau-esque amalgam was the Chinese Type 84. It featured a shorter 16.5-inch barrel, a correspondingly shorter spike bayonet, and — importantly — could almost accept AK magazines. We say “almost” because each magazine had to be individually hand-fit to the gun; they were even serialized together. Because AK magazines, even ones heavily hand modded, don’t work with the SKS bolt-hold-open system (incredibly important for rifles that traditionally ate from strippers — there’s a joke there someplace), the Type 84 had a unique button on top of the bolt carrier to lock it in place.

In 1989, USA Navy Arms imported some to the United States. We’ve heard as few as 400 of these rifles hit American shores. It was and remains the only SKS import that had the shorter 16.5-inch barrel, stubby bayonet, and ability to accept AK magazines, albeit modified ones.

AK magazines are commonly available, fast to reload, and offer a significant upgrade to other cobbled-together detachable magazines for SKS rifles. So, of course, we had to have one. And also make it better. While you could dig deep in your pockets and scour the depths of Gunbroker or Armslist looking for one of those rare birds, we made one ourselves instead.

Aside from the Chinese Type 84 SKS, two other variations that ate from common AK/AKM magazines were imported. The first was dubbed the SKS-D by dealers to differentiate them from the fixed magazine fodder. It looked like a standard CHICOMM SKS, differing mainly by accepting AK magazines.

These rifles came in before the George H. W. Bush administration banned the importation of so-called “assault rifles” in 1989. On the other hand, “sporting rifles” were allowed, all of which had fewer “assault rifle” features like bayonet lugs. Because drive-by bayonet assaults were apparently a huge problem in the 1980s.

At this time, we also began seeing the SKS-M. With a real name scripted on the side of the receiver rather than a dealer denomination, the SKS-M was most often imported with the shorter 16.5-inch “paratrooper” barrel. And, of course, with dangerous features like the bayonet removed. The SKS-M rifle had a “sporting” stock, either consisting of a Monte Carlo-style that almost looks like a standard stock, or the dreaded thumbhole.

While more of these rifles came in than the Chinese Type 84, a trade dispute in 1993 ended Chinese importation of most all firearms and ammunition shortly thereafter (you can still get shotguns though — see our piece on the Lynx-12 in Issue 37).

Since we wanted a Type 84, we’d have to start our journey by first obtaining an SKS-M.

The firearms market is completely upside down compared to two decades ago. Instead of an SKS costing a mere fraction of an AR-15, SKS prices often meet or even exceed those of a basic AR. And a special one like an SKS-M? Good luck.

We happened upon one at The Bullet Ranch, in Pataskala, Ohio, and snatched it up. Monte Carlo-type stock, nonexistent bayonet, and that all-important short barrel and magazine well. What we didn’t know is that this would be just the start of our journey.

The appropriate foreign parts were very easy to obtain online and relatively inexpensive, including the shortened paratrooper spike bayonet. But alas, the hardest part had yet to come: compliance with the law, specifically 922(r). Essentially, 922(r) means that you can’t simply take an imported “sporting rifle” and give it “assault features” without first increasing the amount of American-made parts. And no, not every little screw counts. There are 20 “parts” specifically listed in Title 18 Chapter 44 Section 922(r), further broken down in Title 27 Part 478.39 of the Code of Federal Regulation. Stripped down, the SKS-M looks normal, sans the mag lock and magwell. Yes, we also feel like we need a lawyer just to read that sentence. Not every specified 922(r) part corresponds to an actual part on an imported rifle. Thus depending on the design of your rifle, varying numbers of American compliance parts may be needed. Regardless of the foreign rifle you’re converting from “sporting” status, the law says that you can have no more than 10 foreign parts from that list of 20.

Because the SKS rifle isn’t nearly as popular as other imported rifles, it can be harder to find appropriate compliance parts. Furthermore, not every compliance part is a simple “drop in” fit with our SKS-M because of its shortened gas system. Deciding to go with the belt and suspenders approach, we replaced more than technically necessary in order to ensure there could be no question about its legality.

We begged and bartered for a U.S.-made fire control group, then wrestled with installing it. We took a brand new and shiny U.S.-made gas piston and shortened it to work with the truncated gas system. And we begrudgingly only used U.S.-made magazines. With a twist of irony, we note that U.S. magazines need to be modified to fit. Just like regular AK magazines in the Chinese Type 84.

But once we had all of our parts and pieces, we could put it all together. We’re thankful Chinese manufacturers used wood approximately as soft as soap, which made hogging the magwell out much easier. And oh yeah — we had the barrel threaded.

SKS Rifle On the Range

We wish we could say that this was a pleasant rifle to shoot, but that would be a bald faced lie. The bare muzzle and heavy gas resulted in more recoil than the 7.62×39 normally metes out. The brass (err … steel) casings seemed to fly as far as the bullets themselves.

Furthermore, though it might sound a tad strange, we missed having a pistol grip. The ability to use your shooting hand to pull the rifle back into your shoulder for better recoil control is diminished with the standard stock. The GoGun USA brake made a huge difference in recoil.

Maybe we got a lemon, but benched group sizes at 100 yards were in excess of 5 inches. Precise indeed.To help with the recoil, we installed a SuperComp XL from GoGun USA. Sure, it doesn’t look like a Chinese Type 84 anymore, but boy was it more fun to shoot and easy to remove. And, of course, we also installed a Surefire SOCOM762-MINI2. After carefully checking alignment, we gave it a go.

If brass went as far as the bullet with a bare muzzle, we’re pretty sure we put some in orbit with the suppressor mounted. There’s no way we can recommend silencing an SKS rifle unless some special measures are taken, lest you end up with bent pistons and destroyed rifles. Some like the fully hooded front sight of CHICOMM guns; we aren’t among them.

Like a road trip with friends, this project turned out to be more about the journey than the destination. Did we accomplish our mission of a DIY Chinese Type 84, but better? Kind of.

Once we track down three more 922R compliance parts that don’t make it look like a Y2K bubba job, we’ll say mission accomplished. We’d then have the ability to legally use whatever magazine we want. Until then, our rifle suffers the same fate as the Chinese Type 84. But when that happens, she’ll be the hottest cashier at Dollar Tree. 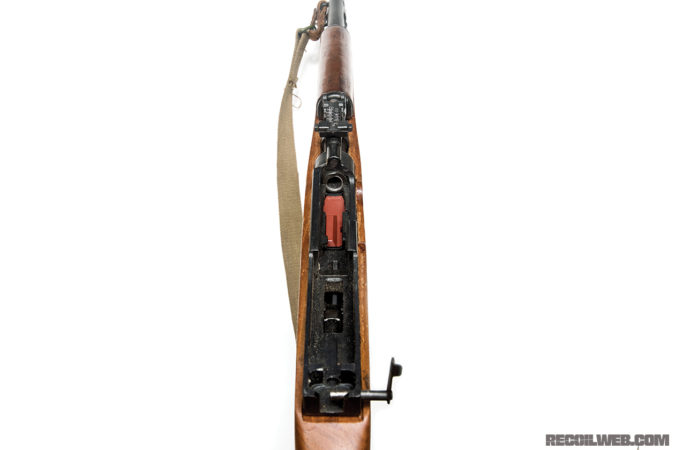 SKS Rifle, Dressed up as a Type 84 Also check out: Old School: Karabiner 31 and the Standard Catalog of Military Firearms.