The Luger P08: The Legendary Masterpiece The Pistole 08, commonly known as the Luger, or Luger P08 in the Anglophone world, is the most iconic pistol in the world. There, it’s been said — sorry not sorry, 1911 fans. Until the Glock 17 (which actually has some of the same geometry as the Luger), few pistols have been issued or adopted as frequently as the Luger. Even in pistols such as the Lahti and Nambu, you see the Luger, even if you don’t see its action. Imitation is the sincerest form of flattery. Let’s establish something up front — this article is a meager introduction. Hundreds of volumes have been printed on the Luger and its variants and for good reason. No trophy was as treasured for the Doughboy or Dogface fighting in Europe in the World Wars. There are even papered bring-backs from Vietnam, as the Soviets supplied large numbers of captured German weapons to various communist regimes around the world from Africa to Asia. The Luger P08 was amongst those guns that were in those shipments. While it might be difficult to find a Luger today being issued to police or military, it’s among the most sought after and treasured of guns in collections internationally. The fact that Princess Leia used a modified Luger prop gun in Star Wars does nothing but add to its luster. Georg Luger designed what eventually became the P08 in stages. The design was Luger’s, but like so many other successful firearms it incorporated a number of features from earlier guns, specifically those from Hugo Borchardt, who was a bit temperamental — as were his pistols. The Luger’s most noticeable feature is the toggle action that gives its distinctive appearance, and although the Luger P08Luger P08 wasn’t the first pistol to utilize the toggle action, it’s the most recognizable. It’s the product of the best of late 19th century small arms engineering. It’s complicated, it’s generally insanely well machined and finished, but it can be finicky.

However, the pistol was evolutionarily important and, for its day, was an extremely impressive and effective handgun. It was so effective and so widely adopted that it’ll likely be impossible to ever compile a complete list of organizations that adopted it and all of the subsequent modifications to the pistol due to national and local requirements. Even the United States tested the Luger for possible adoption. Although the Luger didn’t win the trial, it showed quite impressively. U.S. Trial Lugers now command a huge premium on the market. Sights consisted of a tapered blade front sight and non-adjustable V-shaped notch cut into the toggle mechanism. Small parts were marked with the last two digits of the gun’s serial number.

The other salient feature of the Luger was its caliber. Originally dubbed 9mm Parabellum, the 9x19mm is now most commonly referred to as 9mm Luger. Without expanding into the history of the 9x19mm cartridge (which would be the topic of a book easily, not merely an article), it’s the most influential pistol cartridge of all time, and there are more pistols and submachine guns in and out of service in 9×19 that any other caliber out there. If the Luger did nothing else, its effective and mass introduction of the 9x19mm to the world would be enough to make it stand out.

While the Luger P08 itself and the 9x19mm went on to serve in various armies and in various guises, it’s the Luger in German service that commands the attention, imagination, and desire of most collectors. Officially entering service in 1908, thus the term Pistole 08, the Luger was produced from its inception almost through World War II, with parts guns and refurbs likely being thrown together all the way until May 1945. The breadth of issue of the pistol in Germany from 1908 to 1945 was actually quite impressive. Officers, many of whom paid for their own sidearms, obviously acquired the Luger in large numbers. Machine-gunners, pilots, radio operators, police, panzer crewmen, and a vast assortment of other personnel were issued the Luger as a standard sidearms until 1938 when the Walther P.38 (subject of a following article) began to supplement, but not entirely supplant the Luger.

One of the more interesting subcategories to pursue in Luger collecting is acquiring pistols with unit markings stamped into the frame, usually on the front strap of the pistol. Although the markings can vary, they can sometimes be specific enough to identify the company from which the pistol originally came, speculatively giving the owner an idea of where it might have been captured or “liberated.” However, after WWI this practice was largely dropped, although unit markings aren’t entirely unusual on WWII Luger holsters. Luger P08 holsters are almost as distinctive and well-made as the pistols themselves. In fact, case is really a better description than holster. The typical Luger “hard-shell” holster completely encases the pistol usually in rather high-grade polished and reasonably weatherproof leather, protecting the pistol and its intricate machining and action from the worst of the elements. Most hard-shell Luger holsters are secured with a strap and buckle rather than a strap or flap and post, exchanging security and cleanliness for speed of employment. The holster also contains a small pocket for the takedown tool and a spare eight-round magazine, the design of which remained largely the same through the Luger’s production, although materials evolved along the way. During WWI, the Luger was even equipped with a “snail-drum” 32-round magazine. However, using this magazine without the carbine stock for which most Lugers are cut is awkward at best.

The Luger P08 probably still soldiers on in the world, but not in general issue. There’s a famous picture of a Royal Marine with his gear laid out, en route to the Falklands, with his own personal Luger displayed with his kit (impossible now in the UK of course). After WWII, the Luger was still widely found in European armies, and the East German Volkspolizei (VOPO) used them in large numbers — finding a VOPO gun always makes an interesting addition to the collection. Various commemorative Lugers have been made since WWII, and if you have the time and money, one exclusive German gunmaker still produces about a hundred per year. 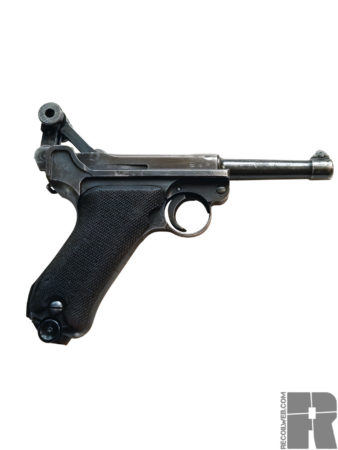 If this article has piqued your interest in the Luger, good; that’s what it was intended to do. If you love firearms and firearms history there are few other pieces out there that’ll give you as much satisfaction and madness in pursuing. There are dealers who specialize in nothing but Lugers, and there are untold thousands still out there in the “woodwork” to use collector’s parlance. In fact, one of the Lugers featured here with the other artifacts surfaced just as this article was being considered.

4 responses to “The Luger P08: The Legendary Masterpiece”