Timney Triggers Invests in the Future of Cody Firearms Museum 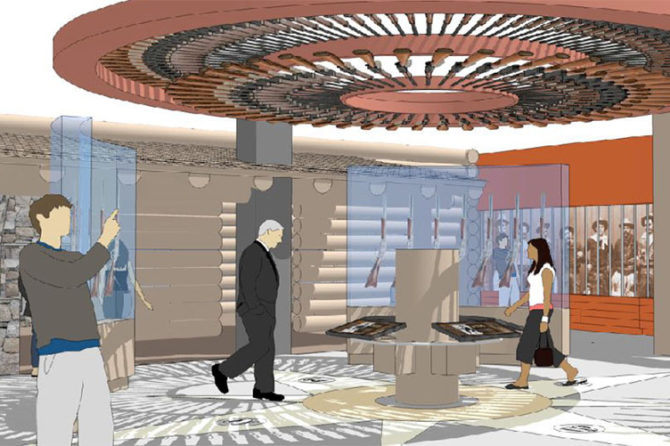 The Buffalo Bill Center of the West is pleased to announce that Timney Triggers has pledged $500,000 toward its Cody Firearms Museum (CFM) reconstruction. The Center recently revealed its plan to fully renovate the CFM. Timney Triggers’ donation combines with several federal grants and high-level individual donations received to date for the project; however, they have led the charge in the firearms world as the first substantial industry gift.

“I am happy to make this gift,” said John Vehr, Timney Triggers owner, “because our industry must support and appreciate the benefits derived from having the finest gun museum in the world educate hundreds of thousands of people who visit [the museum] AND are new to guns, on the historical importance and the positive aspects of our industry.”

The Center is privileged to have Timney Triggers’ support of the Cody Firearms Museum renovation project, especially with the company’s rich history as one of the oldest and largest trigger manufacturers in the world. It has produced replacement triggers for more than 70 years, and since its launch in 1946, the business prides itself on the quality of precision machining and workmanship that goes into each and every Timney Trigger. Each trigger is proudly made in the USA and offers a lifetime warranty. The CFM is planning a two-floor renovation that caters to both firearms enthusiasts and the general public. This museum will boast more than 4,500 firearms on display, Steel Challenge simulators, and additional hands-on interactive displays that teach people not only about how firearms changed throughout history, but why they’re significant to our cultural heritage. Peter Kuyper, newly appointed CFM Advisory Board Chair, is “thrilled to be a part of such a terrific opportunity to educate the public about firearms history. No other firearms museum in the country is poised to tell this story in a way that will reach both the collector and the novice. I’m honored to become a part of the Cody Firearms Museum making its own history.” Robert W. Woodruff Curator of the Cody Firearms Museum Ashley Hlebinsky is “ecstatic to have Timney Triggers in support of this project. When we set out to plan the new museum, we wanted to make sure that our historic roots were fostered in the new museum. However, it is equally important that we acquire representation from newer companies, or companies whose stories haven’t been told previously in museums, solidifying their place in history.”

To learn more about the Cody Firearms Museum, go to: https://centerofthewest.org/explore/firearms/