Upgrading the IWI Tavor with the Geissele Super Sabra I will admit I'm something of a trigger snob. So when Geiselle Automatics announced a trigger pack for the Tavor, I knew I had to try one. I have upgraded my SCARs, ARs, Glocks and M&Ps, why not the Tavor too? Other than Geissele, the only other suitable offerings are from Timney and ShootingSight and I hope to eventually try those out too. The Tavor is an Israeli battle weapon in a bullpup configuration. It was designed for infantry use and being a military weapon comes with a pretty heavy factory trigger. The trigger on my Tavor measured a little over 11 pounds, which I found to be unacceptable.

The fire control system in the Tavor is nothing like you would find in an AR. The trigger is up front (meaning the actual thing you put your finger on) and the action is in the back. The trigger sits almost a foot forward of the trigger pack, where the hammer, sear, hammer spring are located. Pulling the trigger on the Tavor activates linkage that engages the sear in the trigger pack on the rear end. IWI, the makers of the Tavor have conveniently designed the Tavor’s trigger pack to be removed easily for maintenance. Because of that, replacing the factory trigger pack is easy by comparison to other platforms. If there is an easier firearm to do a trigger swap in, I haven’t found it. The installation took all of 1 minute and that is being liberal. It goes like this:

Remove the magazine, clear the weapon of any ammunition by visually inspecting the chamber and place the weapon on safe. The hammer must be cocked to remove the pack.

Push the two captive pins holding the trigger pack from right-to-left. I recommend using a punch or something like a rifle cartridge. They should move fairly easy without much resistance. Swing the hinged spring loaded door open and the trigger pack drops right out the bottom.

Slide the new one in, push the pins back into place, and you’re good to go. I found the pins to be a little tight on the Geissele, which is a good thing. A little light tap with a hammer and they should be nice and snug. A huge benefit the Geissele has over other available Tavor triggers is that it offers adjustability. From the factory, the Super Sabra is set to 4.5lbs, however the pre-travel weight is adjustable allowing the overall weight to be adjusted. The Geissele is a 2-stage design but to me feel more like a single stage.

The trigger housing is made of CNC’d billet aluminum instead of plastic found in the factory trigger pack. That being said, the trigger pack weight 4.8 ounces compared to the 3.3 ounce factory pack, so you are adding 1.5 ounces to the weight of your Tavor. I find this to be a non-issue as the benefit far outweighs the weight gain.

The trigger feels a little mushing for the first stage but brakes very crisp and clean with a pronounced positive short reset. I attribute the mush from play in the linkage between the trigger and pack, which is really something that is inherent with the bullpup design.

Follow-up shots are faster than stock and the overall feel of the trigger is significantly noticeable. 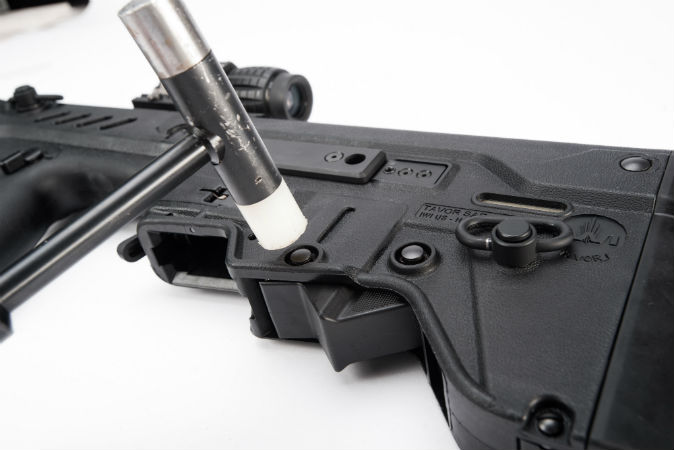 At $350, it is a big investment on a $1700 gun. There is nothing wrong with the stock trigger from a functionally standpoint, but if your going to use the Tavor often or for personal defense, LE, etc, then I believe it's a worthwhile investment.

For more information on Geissele or the Super Sabra Tavor trigger, check out http://geissele.com 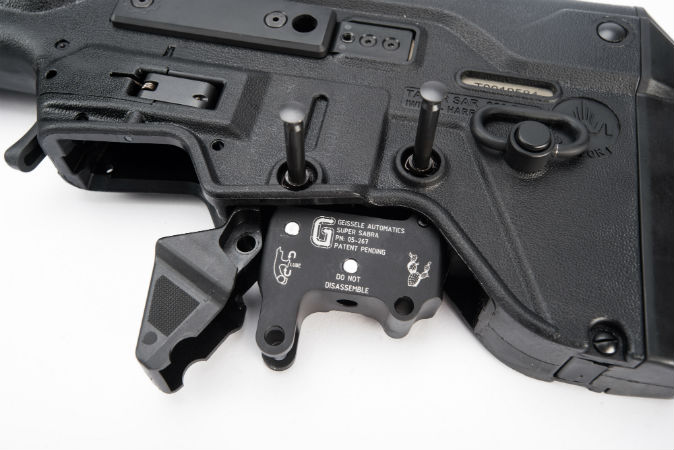 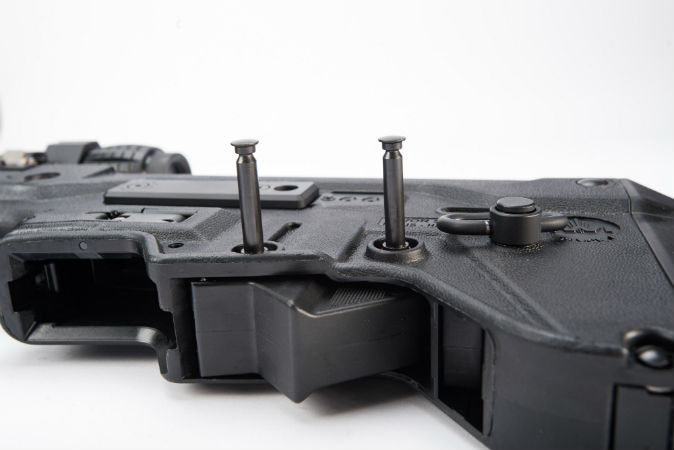