Editor’s Note: The Kel Tec CMR 30 is available to civilians, and for good reason. We all know that’s technology that all red-blooded Americans should always be able to get their hands on. [email protected] sporting purposes. This article originally appeared in RECOIL #44 and was updated on 7/23/20.

Even if Heckler & Koch didn’t hate you and think you suck, owning an actual MP7 might prove to be more burdensome than you’d expect. 4.6x30mm ammunition is awfully hard to find on a local gun shop shelf, while it’s slim pickings online as well. Luckily there's other options, with a little elbow grease and hackshop ingenuity, the Kel Tec CMR 30 makes for a pretty good alternative.

And what about 5.7x28mm? Frankly, one of our kidneys would immediately get nervous at the thought of an MP7 chambered in 5.7x28mm. Oh sure, there are other 5.7 weapons out there to be had — you can get your Stargate on with an FN PS90, travel back in time and try to find a 57 Center AR57 AR-15 upper, or snag a CMMG Banshee, which inexplicably accepts FN Five-seven pistol magazines instead of P90 magazines.

But expensive and relatively rare ammunition is absolutely not what this article is about. This article is about the Poor Man’s MP7. If you’re the type of person who’d think about fashioning a plate carrier from reusable Walmart bags or would consider purchasing Chicom Crye pants, this one is for you. 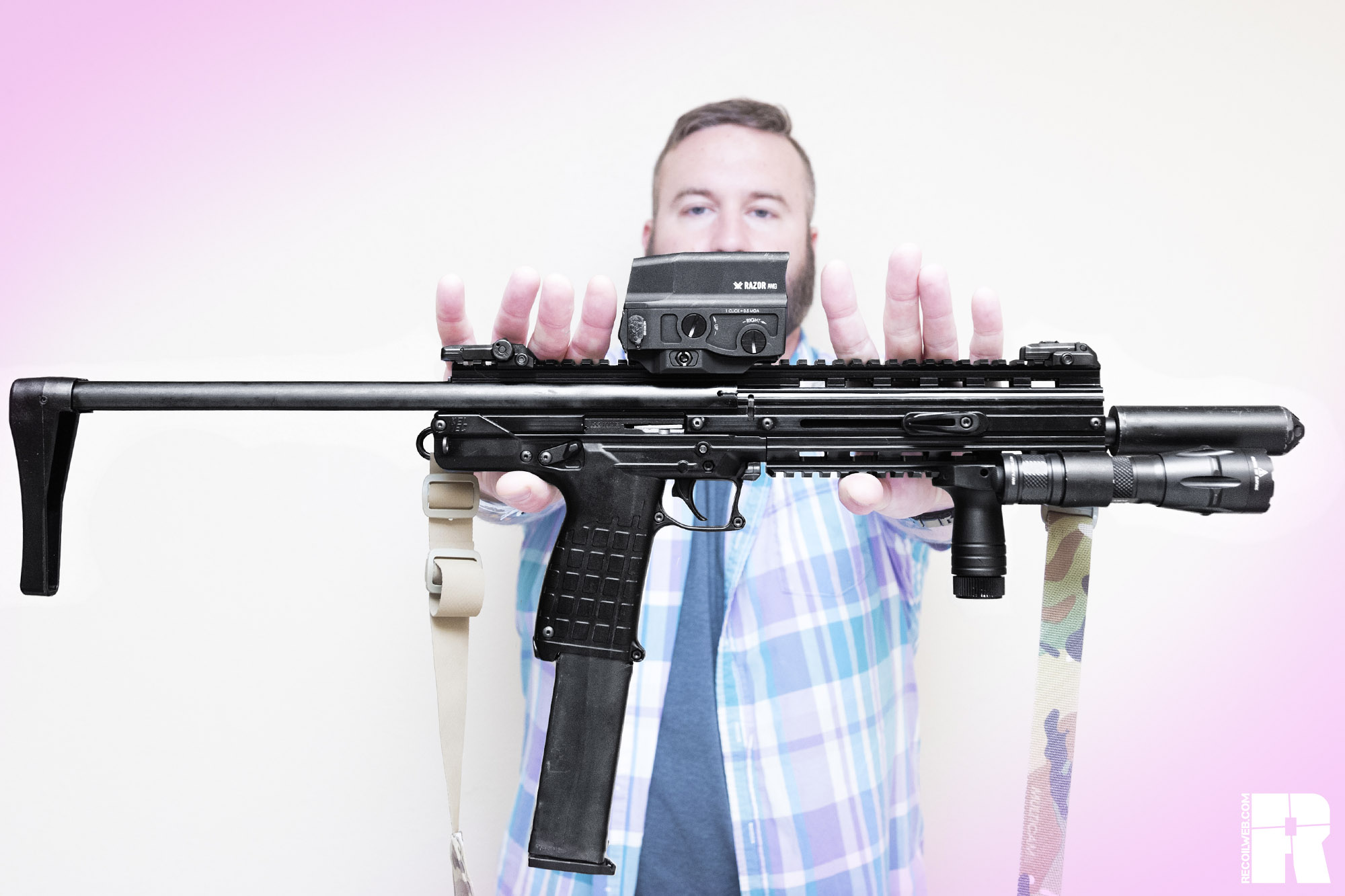 And in lieu of the elusive 4.6x30mm or 5.7x28mm, we’re rolling with KelTec and .22 Winchester Magnum Rimfire (.22WMR, also known as .22 Magnum or .22 Mag). While prices jump considerably from its .22LR baby brother, the magnum variety offers a substantial increase in range along with a reasonable variety of loadings. You won’t find us advocating any sort of rimfire for defensive use, but that didn’t stop the folks at Hornady, Speer, and the like from producing loads that expand in gelatin even when fired from handguns. Aside from joining the military and passing Special Forces selection in a variety of nations, the closest most will ever come to a real MP7 is a high-quality airsoft replica. Or follow along, and you can make this bad boy yourself. KelTec first released the PMR-30 pistol back in 2011. They apparently found it popular enough to release a rifle variant, the CMR-30, some three years later. The PMR and CMR share calibers, magazines, controls, and grip modules. The CMR 30 has some distinctly MP7-ish aesthetics and a modestly functional collapsing stock, inspiring us to pursue this build. But that barrel just looks so … damn … long. And this being our chop-everything-themed issue, we decided to cleve it down to 10 inches.

While I do tend to put variable optics on everything these days, so far that impulse has yet to extend to PDWs and pistols — perhaps just a matter of time. Red-dot sights still hold their own quite well in this arena, so a Vortex Razor AMG UH-1 it would be. The CMR came from the factory with chunky plastic Magpul MBUS sights, but we immediately tossed those behind the workbench to commingle with long-lost buffer retaining pins and springs, installing a pair of MBUS Pro sights instead.

It was harder to figure out an effective weapon-mounted light configuration. The Kel Tec CMR 30 doesn’t have any rails on the side, nor is it possible to add them due to the large charging handle on either side. Normally we’d simply toss an offset mount on the top rail and activate the light with our support hand, but once again the charging handles make this impossible. Pulling out a trick from early GWOT, we mounted a vertical foregrip and an offset weapon-mounted light in front of it. Simply wrap your support hand thumb behind the grip and hit the tailcap to activate the light. For the light itself, we chose the 1,500-lumen SureFire Fury-DFT. Because reasons. Of course and as usual, our faux-MP7 would have to be suppressed. When affixed to a 5.56, the Witt Machine Canooter Valve left us wanting, but it’s perfect for .22WMR. Be forewarned, though, .22WMR is a much different beast than .22LR when it comes to silenced shooting. Aside from truncating the barrel, we had another important modification to perform — adding the ability to mount a proper sling. Sure, there’s a cheesy loop on the ass end of the gun, but we found it wholly insufficient. Instead, we looked for places to install Magpul QD cups originally intended for their UBR stocks. A couple of fastener replacements resulted in a good sling setup. We selected a Lead Faucet Tactical sling because it’s tough and featherweight. With just a modicum of basic research on the CMR-30, you’ll find one common complaint: Not only are the magazines difficult to fill, if you fill them incorrectly you’ll experience an inordinate number of stoppages. No one likes a gun that jams frequently and for no apparent reason — it takes the fun out of a range session faster than a prostitute can take money off of a Private.

The main issue is that Kel Tec CMR 30 magazines use an internal spacer along the inside spine to accommodate a double-stack of the rimmed .22WMR. If you botch the magazine filling process, which admittedly isn’t hard to do, you’ll muck up the positioning and inevitably you’ll have a failure-to-feed. Or multiple failures-to-feed, as is seemingly quite common.

There are an exhaustive number of forum posts and YouTube videos on the subject. While some of them might help resolve your woes (namely, paying close attention to the manual before simply jamming rounds in willy-nilly), we think we found the best solution currently available. It’s a magazine loader, but it’s not from one of the usual suspects like Butler Creek. American Speedloaders has what you need. It’s a 3D-printed part, but don’t let that fool you; not only is it quick to fill a mag, but all of our failure-to-feeds virtually disappeared after we started using it. Well worth the $30. Another mag-related issue that we experienced had more to do with the design of the CMR-30 itself. Both the CMR and PMR feature a heel magazine release as opposed to a thumb release more commonly seen on modern pistols. There are certainly many subguns with similarly placed mag releases, such as the MAC-10 and Uzi, but extracting their big sticks are much easier simply due to their increased length. KelTec should be commended for squeezing 30 rounds of rimfire in such a small magazine, but we think they should’ve gone bigger, or at least provided more options.

While there are some aftermarket baseplates that ostensibly help ease mag extraction, we thought we’d fill two needs with one deed by making our own high-capacity magazines. After some trial and error (also known as breaking things), we managed to successfully graft two magazines together with the aid of epoxy, a borrowed plastic welder, and some silver solder. The spring was actually the easiest part, as instead of a square coil that you’d see in, say, a Glock magazine, the CMR mags use regular round-coiled springs.

Some thick heat wrap helped hide our work, and frankly, we think they look pretty neat. Now we have several mags that hold 55 rounds each, as well as another we simply extended to make loading and unloading a snap. As mentioned, we made plenty of mistakes filling the magazines and paid the price. Topping them off was a helluva chore until we found the American Speedloader. Further complicating matters is that you’ll want to look for ammunition approaching 40 grains for maximum reliability, though KelTec says to start at 30 grains and work up. We also recommend avoiding any projectile that’s entirely lead, such as Winchester 45-grain subsonic. Since lead is so Remember, this is a rimfire rifle, so despite the punch up in power compared to plain vanilla .22LR, individual guns may show a preference for specific ammunition. Our suggestion is to buy a box of everything you can find locally and see what she likes; rip the side of the box off when you find something good and store it in the case with the rifle for reference.

The ambidextrous charging handles don’t reciprocate and are also quite large. The use of a stubby VFG definitely helps. More recently we swapped to a more MP7ish grip, but our example was awful. With the use of a dremel tool, epoxy, and plastic welding we got rid of all of the slop but as it came it was unusable. Yes, we can be hard-headed.

Insofar as accuracy, this gun won’t bring any trophies home. While there are many internet-hero claims of sub-MOA groupings, we hovered just above 2 MOA with statistically significant groups. Perhaps the trigger could be tightened up to offer some improvement, but we didn’t bother — we’re using this as a hoodrat HK, not for PRS.

As a suppressed rimfire rifle, it should come as no surprise that things got quite filthy by the end of each range session. Cleaning guns has never been fun since.

There’s no denying this is a fun gun to run — when it runs. If you pick up a Kel Tec CMR 30, consider the American Speedloader mag filler a mandatory accessory, find the ammunition it likes, and enjoy.
Perhaps one-day KelTec will make some factory stendo’ mags and add some proper sling swivels, but we’re pretty happy with our Dr. Frankenstein mods. Oh, and for chrissakes, chop the barrel down! Now, will someone please make an MP7 chambered in 5.7x28mm?