In the real world, it's likely that your target may be above or below your location. If the target is far enough away and the angle is steep enough (high or low), you might just completely miss it if you don't compensate for the angle and adjust your normal elevation settings on your scope or sights.

The longer a bullet flies through the air, the further it falls from its original path. To compensate for this increased drop at further distances, we must increase the angle of our barrel upward.

The good news is that a bullet's drop due to gravity, and the corresponding elevation compensation across flat ground, are fairly consistent. Of course, different environmental conditions and different bullets and/or velocities affect how much a bullet drops and how much elevation compensation is needed (see “A Funny Thing Happened on the Way to the Target,” RECOIL Issue 22).

However, for the purposes of this article, let's focus only on angle and assume that all other conditions are exactly the same. Therefore, once you know exactly how much elevation adjustment on your scope or sights is needed in order to hit a target at a certain distance across flat ground in certain environmental conditions, you can use that elevation adjustment again in the future when you want to shoot another target across level ground in front of you at the same distance and in the same conditions. Easy, right? But, if the target is above or below your position, the corresponding angle that you're shooting (up or down) may well require a change to your typical “flat-ground” elevation adjustment for a target at that distance in those conditions. When shooting at an angle, the bullet won't fall as far off of its original path. Therefore, less elevation adjustment is needed in order to hit a target at an angle than a target directly in front of you. Remember it this way — if you ignore the angle, your bullet will impact high. How high depends on the degree of the angle and the target's distance. This is true whether the target is above or below you — don't believe me? Let's do that math!

First, a thought exercise. Imagine laying on the edge of a 500-yard cliff and shooting at a target (target #1) directly below you against the base of the cliff on the ground. How far will the bullet deviate off of its original path due to gravity? You're right; it won't deviate at all! It'll fly straight down to the target.

This is the steepest angle we can shoot, i.e. 90 degrees (any more than 90 degrees is really just less than 90 degrees facing the other way). Now imagine a target (target #2) that's almost directly below you. Let's say it's 25 yards away from the base of the cliff on the ground.

You can imagine that gravity will pull the bullet slightly off of its path — it won't travel in a perfectly straight line like before. 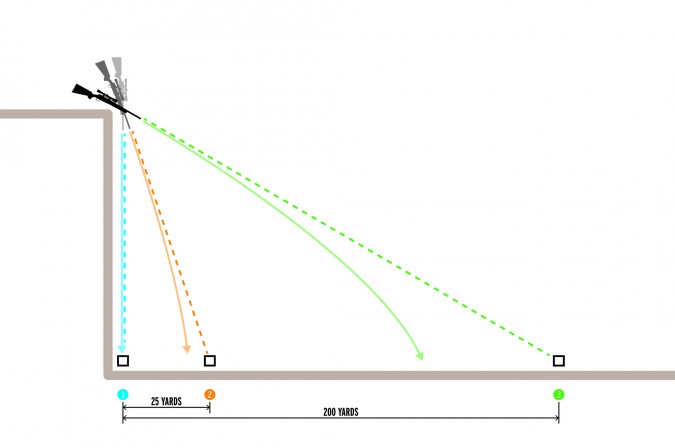 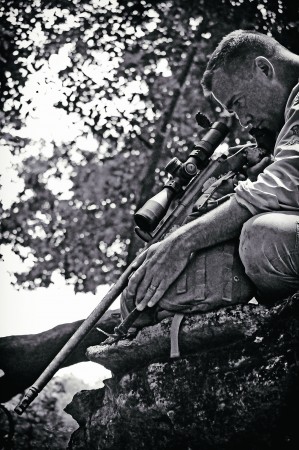 I like to refer to the actual distance to the target as the “true distance” and the shorter distance that we're going to pretend the target is from us to compensate our elevation adjustment for the angle as the “angle distance.” After you know the true distance to your target, the first step in finding the angle distance is determining the angle of the target from your position. One rule of trigonometry is that alternate angles are equal. For our purposes, that means angle B in the diagram is the same as angle A.

There are a few ways to measure the angle to a target. Basic methods include using a card (homemade or a MilDot Master) with a weighted string (1) or a compass with an angle finder built-in. Chances are your smartphone also has the ability to measure angles. You can either look down the edge of these devices to the target or rest them against the edge of your elevation turret as you look through your scope. You can also mount purpose-built devices to your rifle/scope like an Angle Cosine Indicator (2), saving a step in this process by giving you the cosine of the angle instead of the angle itself.

Once we know the angle to the target from our position (angle A and equally, angle B), we can start with the trigonometry. There are three basic trigonometric functions: sine, cosine, and tangent. To figure out our angle distance, we'll use cosine. If I wanted to distract you from this article and start telling a different story, I'd go off on a tangent (bad joke). The diagonal side of a right triangle (across from the 90 degree angle) is called the hypotenuse (Z). If you know the length of the hypotenuse and the angle of one of its corners, you can use the angle's cosine to determine the length of the other side of that corner (Y). In our situation, we do this by multiplying the cosine of angle B (which is the same as A) by the true distance (Z) in order to find the angle distance (Y). To the right is a table of angles and their cosines for your reference.

Therefore, we'd use our elevation adjustment for a 693-yard target even though the target is actually 800 yards away. There's a good chance that if you didn't take the angle into account for this example, and you used your 800-yard elevation data instead of your 693-yard elevation data, you'd miss completely over the target. It's important to note that the angle distance is for your elevation adjustment only. Because the bullet is still traveling the true distance to the target, you must use the true distance when calculating for wind and other variables (e.g. spin drift). Therefore, in our example, you'd make a wind call for an 800-yard target, but you'd use the elevation for a 693-yard target.

Clearly, paying attention to the target's angle is important. However, at slight angles and closer distances you may choose to ignore the effect. For example, a 5-degree angle to a target with a true distance of 100 yards will result in an angle distance of 99.9 yards, so just shoot the damn thing and be done with it. Stretch the distance out over 500 yards, however, and you'd better be paying attention. As the saying goes, everything counts in large amounts.

The side-to-side angle of your rifle also matters. If you're not paying attention and your rifle isn't perfectly vertical (scope above barrel/receiver) and instead is leaning to one side (it's canted), then you may completely miss the target. This is because while your scope is looking directly at the target, your barrel is angled upward to compensate for the bullet's drop due to gravity. By allowing your rifle to lean to one side, the barrel will point slightly toward the direction the rifle is leaning. Also, the barrel won't be pointed as high. If the rifle is perfectly level/vertical (lets call this 0 degrees of cant), then the tip of the barrel is at its highest point as it points up to the line of sight through the scope.

As we rotate the rifle to its side (increasing the lean/cant), the tip of the barrel travels in an arc. When the rifle is laying flat on its left side, for example, the barrel is perfectly flat against the ground but pointing to the left. Remember, this is because the barrel is pointing toward the line of sight through the scope, which is now to the left of the barrel. This arc path means that our bullet will miss to whichever side the rifle is leaning, and also impact low because the barrel isn't pointed as high to counteract the effect of gravity. How far to the side and low depends on the distance you're shooting and your cartridge. However, even a 1-degree cant/lean can make a 6-inch difference at 1,000 yards. What does all this mean? Gathering data for your rifle at certain distances is useful, but it's only reliable when shooting at targets of the same angle (above and below your position and side-to-side lean of your rifle). If you have a change in angle, and the target is far enough away, you might just miss if you don't compensate for it.

About the author: Ryan Cleckner is a former sniper team leader in the U.S. Army's 1st Ranger Battalion and sniper instructor. Cleckner, who is currently a firearms industry executive, attorney, and university lecturer, has a passion for teaching and explaining seemingly complex topics in a way that anyone can understand. He has appeared as a sniper expert on History Channel's Top Shot program, has a series of popular online firearm instructional videos, and is the author of the Long Range Shooting Handbook. Learn more about him at RyanCleckner.com.