Home » Featured » .50 Cal AR Brought To You By Beck Defense and Lancer Systems

.50 Cal AR Brought To You By Beck Defense and Lancer Systems The Beck Defense 510 is more than a gun or a round. It's a capability that's going to excite warfighters, law enforcement and big game hunters. The platform is based on the new Beck .510 round: a 50 BMG caliber projectile loaded in a .510 diameter straight wall case with a rebated .308 rim, fired from an AR10 platform using a magazine developed by Lancer Systems.

It's all about the payload.

Imagine having the ability to accurately deliver everything from .50 cal. FMJ, monolithic, segmented, expanding, incendiary, tracer, and even explosive projectiles using an AR10. The Beck .510 makes the wide spectrum of 50 BMG capability, from 200 gr. to 690 gr. projectiles, available to shooters in a compact and familiar platform. According to Beck Defene's Rob Carson, the Beck 510 offers, “.50 caliber capability in an AR10 platform, subsonically out to 300 yards and supersonically out to 600 yards, in an under 13 pound platform, including optics and suppressor.”

The rifle is going to come in two versions; one with a DPMS Gen1 pattern receiver set intended for the civilian market, and another with an SR25 pattern receiver set for the military and law enforcement market to follow. The receivers are cut in-house from billet 7075-T6 aluminum and the rifles will be available with chromoly or stainless steel 12-, 14-, or 16-inch barrels. The gun weighs 8.2 pounds, dry, sans optic, can, and mag.

To get the Beck .510 round to function in an AR10 platform, the company uses it's own .510 chambered barrel, barrel extension, and bolt. The muzzle uses 7/8-24 threading to prevent someone from mounting a .338 LM muzzle device or can. There's some differences between the Beck 510 and a stock AR10's ejection port, as well.

The biggest obstacle Beck Defense had to overcome was the development of a magazine capable of reliably feeding the large, heavy rounds through the gas-driven gun. For this, the company teamed up with Lancer Systems. Lancer Systems began development of the L12 AWM .510 Beck magazine by modifying its 7.62 L7 Advanced Warfighter Magazine. Turning the double stack .308 magazine into a single stack .510 was no easy task.

“The large diameter for such a long length really changes how a system feeds compared to a standard .223 or .308 round,” says Lancer System's engineer Matthew Pettit. He explains the large round ends up in three points of contact as it's fed. It's in contact with the breech face, the top of the feed lips, and the top of the chamber at the same time. This contact robs the loading cartridge of energy, slowing it down and increasing the likelihood of a misfeed. Lancer's mission was to overcome the round's stubbornness and prevent it from getting hung up on its way into the chamber. As with Lancer's L5 and L7 mags, the L12AWM is a lightweight, polymer magazine with hardened steel feed lips. Lancer says its L12AWM is capable of reliably feeding a wide range of projectile weights, from a 327 gr. Controlled Chaos round, to a 680 gr. solid brass subsonic round, with future plans to increase projectile weights.

California-resident and hunter friendly 5- and 7-round L12 magazines will be available by fall, 2016 and we're told Lancer may flesh out the line with an additional 10-round magazine.

“The L12AWM is the latest evolution in our magazine line, building off of the engineering and design that went into the L5AWM, L7AWM and SIG Sauer MPX hybrid magazines,” says Kas McManus, business area manager of advanced weapons & components at Lancer. “We’re proud to partner with Beck Defense on this project and introduce a hybrid magazine for the .510 Beck cartridge that is unlike anything else out there.” 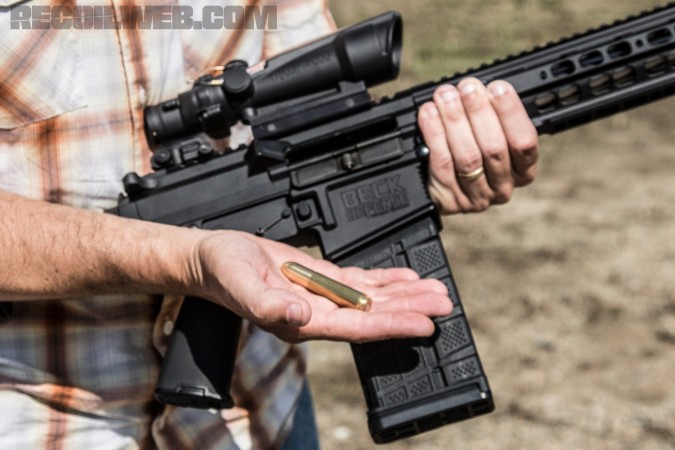 Putting 680 grains of trauma downrange using a .308-ish cartridge capacity is going to have some trade-offs and Carson says the subs are stable and accurate out to about 300 yards, but not much further. He says the 14-inch barrels offer 1-MOA accuracy inside 100 yards with 680 gr. ammo.

Beck is continuing to develop more projectiles with Lehigh Defense. At this time, Beck hasn't submitted the round for SAAMI certification “We might consider it,” says Carson. “Down the road, we'll offer dies and reloading data, but I don't see us going SAAMI right now.” We put a handful of 690 gr. rounds through a pre-production Beck 510 equipped with a Gemtech suppressor a few months ago. The recoil impulse was much more of a heavy push than a kick. It was nowhere near the violence of a .300WM and was less sharp than a .308. It felt more like shooting a heavy-hitting 300 AAC Blackout. Although the impulse wasn't intense, it was strong.

Carson says the 510 Beck is going to cost under $3000 and .510 Beck ammunition should fall in line with the cost of premium .338 Lapua ammunition.

The rifle, magazine, and rounds should be on the line during SHOT Show's 2016 Media/Industry Day at the Range. We're excited to see what Beck and Lancer have done with the rifle system since we shot it in October.

Look for more coverage of Beck Defense's .510 lineup in a future issue of RECOIL and of course updates, imagery and maybe some video at SHOT 2016.