Home » Featured » Arc’teryx LEAF – What is it and why should you care?

Arc’teryx LEAF – What is it and why should you care? Earlier this year Arc’teryx flew a bunch of writers to Chamonix, France. Most of the writers there were present to check out the launch of their new footwear line. A handful of us, however, were there to learn more about Arc’teryx LEAF, to talk to some people who help them design it and to use it in the sort of place and clime it’s intended for.

Before I departed, the sum total of my knowledge was that Arc’teryx is nicknamed Dead Bird, that the name is based on the Archaeopteryx dinosaur, and that LEAF stands for Law Enforcement Armed Forces. I owned exactly 2 pieces of recently purchased Arc’teryx clothing. I bought a 3rd piece while in Chamonix at the recommendation of Eric Graves from Soldier Systems Daily and Rob Curtis of Military Times Gear Scout. I’d initially balked at the price; both of them recommended I spend the money so I wouldn’t have to replace the garment in a year or less. Buy once, cry once as they say. It should have been a salutary lesson, but it didn’t initially take.

Over the next several days I learned a lot. The LEAF guys, big brain Arc’teryx designers and some of the hardest working rescue personnel in the world really laid some knowledge on us.

You never really know just how much you don’t know.

So what is LEAF exactly? Is there any reason why you should be interested in what will be at the Arc'teryx booth at SHOT this week? Most importantly, why should you give a damn, or spend outrageous amounts of money on it? Bring it in, take a knee. I’ll tell you. We’ll start with a quick refresher on Arc’teryx proper. It began back in 1989 as Rock Solid Manufacturing with a couple of climbers named Dave Lane and Jeremy Guard, designing and building gear in Lane’s basement. Their initial crew was comprised of 2 full time and 2 part time employees. One of them was a nice lady named Usha Parbhakar. She was the first one to sew the Shakah Harnesses that later became synonymous with Arc’teryx (and she still works there today).

LEAF began with a US Marine Corps LBE (Load Bearing Equipment) project. In the late 90s the Marines were putting a lot of money into improving individual equipment, and part of that effort was the desire for an internal pack frame ruck. Arc’teryx entered the competition with Propper as a partner and won. This ruck purchase was part of a sea change in procurement, as the military looked to the outdoor industry for proven designs.  That initial order of 1000 packs based on the Bora 90 design, was at the time the single largest pack order Arc’teryx had ever received and some 200,000 were later built.

That Marine Corps pack competition was something of an epiphany for Arc’teryx, who freely admits they stumbled into the ‘tactical’ market rather than moving there with a purpose. Winning the contract and seeing the response of the Marines (and others) helped them realize not only that they could provide a solution for ‘tactical’ customers, but that they had tactical customers in the first place. Warfighters and LEOs, predominantly from specialized elements, were already buying Arc’teryx kit through dealers and the company hadn't even realized it. Any specialized group, whether it’s rock climbers or counter-terrorism operators, has its own needs and argot. Anyone who hopes to attract them as customers must first learn the language. At first, as you might expect, these units did not identify who they were. They’d just order a relatively small lot, 50 or 100 jackets for instance, and ask for a “paint job” for color matching, or perhaps a feature tweak to better tailor it to what was needed. That eventually evolved into a much closer and far more candid work relationship which naturally produced specific products. Now 10 years later that has turned into a full line, which is where they are now—LEAF.

This certainly doesn’t mean all their gear was designed for or built at the behest of steely eyed black budget operatives. Much of it was and is derived both from personal mandates and designer experience (spend any time around these guys and you’ll realize ‘personal mandate’ is an integral part of the Arc’teryx lexicon). The Khard pack is a result of one of those, as is the Maddock Dry Sock, which came about from a designer’s trip to New Mexico. He knew he would be making numerous creek and river crossings during the trip, so instead of bring multiple pairs of footwear he built himself a pair of custom socks. Those became part of the LEAF program and made their way into the Canadian and other militaries. Arc'teryx is primarily a design house. They build task driven products. Here is the way one of their crew put it.

Obviously that’s a significant advantage to men and women on the sharp end worrying about assholes with AKs in faraway places. Good gear is unquestionably a force multiplier.

Asked which special units they provide gear for or work with, members of the Arc’teryx team have the grace to look abashed.

“It’s going to sound silly,” says LEAF brand manager Marc Elbaz, “but that’s something we don’t say out of respect to our customer base. We just don’t say who we sell to. It’s just better that way.”

“That’s the deal,” he says. “It’s the way it has to be. Our product line manager works with a network on of individuals on a…on an international level, but out of respect for the guys helping us out, guys with unique skillsets, some of it we gotta keep it on the DL. I think you can appreciate that.”

I can, and did, especially when introduced to some of the SMEs they can own up to working with – like some of the world’s best high altitude rescue personnel, with whom we were privileged to train on Mont Blanc and le Mer de Glace. What’s interesting now is the increasing trend of things coming full circle. LEAF began as an adaptation of commercially available products. Now that it’s been around for over a decade, it’s rapidly becoming an advanced design cell for the rest of the company, which is probably not surprising given the use it’s been put to in over a decade of war. The military is now feeding the outdoor industry.

For an example of this, look no further than the Khard pack, which has seen great reviews since its introduction. It was built for LEAF, but it caught the eye of another team on the commercial side, who took it to use as a framework. They made some modifications so it’s a somewhat different piece, but the core of the pack is still the Khard. An evolution of that is now available as an outdoor climbing pack, modified to satisfy the needs of a different set of end users. The suspension and the monoframe are the same, but the innards and the pocket are built specifically for climbers as opposed to a different end user who might be using the Khard 30 while hunting bad guys. It’s not as versatile; doesn’t have Velcro on the side, it’s not modular and can’t customize it and it’s more of a rope bucket than a breacher bag but still an excellent piece of equipment. The relationship Arc’teryx has with the SOF world is fundamental to the LEAF program. It's also the single greatest reason their gear is such high quality— and like in most aspects of life, quality is expensive. Since they also strive for garment longevity (which necessitates designing to allow for repair), the price goes up even further.

“You put your jacket in the ground and 2 years later you can unbury it and it’s in perfect condition,” says Denny. “That’s a bit of our environmental statement – the cost of the jacket has to do with the materials we use and the construction techniques that make it repairable. I’ve seen jackets over 10 years old in great condition – if there’s a delamination of the fabric for instance, we would most likely repair that jacket and get it back into the field. Arc'teryx repairs over 10,000 jackets a year, which keeps more stuff out of the landfill. Very rarely would we have to actually give them a new one to replace it.” From what I’ve seen and heard in my admittedly limited experience, they genuinely do supply gear to people who need it the most (or the worst, depending on how you appraise such things). If you were to try to tell me there are things more extreme, I’d be either dubious or impressed (or both). The time I spent there at Chamonix with the Specialistes Montagne  mountain rescue gendarmes was enough to convince me of that. (More on them soon—they are some very nice and dedicated men, and hard as woodpecker lips). Arc’teryx readily admits they’re not going to sell a lot of some of their niche products. Since those aren’t where they make their money, however, this isn’t an issue. That’s not to say they’re completely altruistic. Let’s not forget, Arc’teryx is a business. They are fully aware of the grass roots effect of peer to peer influence with the military or other elite professional communities and pragmatic about exploiting it. This leads to increased sales, which isn’t a bad thing. It’s a little thing I like to call capitalism. Passion for your craft, quality of manufacture and the acquisition of profit should not be mutually exclusive. Quite the opposite. The people of Arc’teryx—at least the guys I worked with—are absolutely convinced they make the best shit out there, with good cause. It really is damn good gear. Is it worth the cost to you? That’s a decision only you can make. However, when someone dismisses it out of hand with a scoff about “Dead Bird fanbois”, and asserts that’s it far too expensive, well remember what The Dude says.

I understand the hesitation. It is expensive. Remember me, the guy who didn’t want to buy Arc’teryx while he was in France on an Arc’teryx trip? At the individual level, particularly outside the rigors of operational necessity, it’s always going to be subjective. You should buy what you can afford, for what you need. Are you working patrol in a snowstorm once in a while, hiking the Alluvial Fan Trail in Autumn or are you going Full Shackleton? Sure, it seems banal to say “you get what you pay for” but sometimes those aphorisms are aphorisms because they’re true.

I don’t own a lot of Arc’teryx, though I’m (very) slowly adding to the lineup as the budget allows. So far I like every piece of LEAF and commercial Arc’teryx I’ve worn. Part of this is practicality—this stuff is rugged as hell. Part of it is fashion. I like the way it looks and admit I want to fit in with the metrotactical crowd. Am I ever going to need snivel kit of this quality? I sure as hell hope not, but I’d just as soon have it and not need it.

If you’re on the fence about trying LEAF, give just one piece a try. I think you’ll be glad you did. I am – I've used it as hard as I can and it's held up well.

Anyway, it makes me feel pretty.

You can see the 2015 LEAF Catalog here on Soldier Systems. The Arc'teryx booth at SHOT this year is in the same place as last year, if you're going to be there. Main level, #10526, right beside that big damn Realtree fortress. 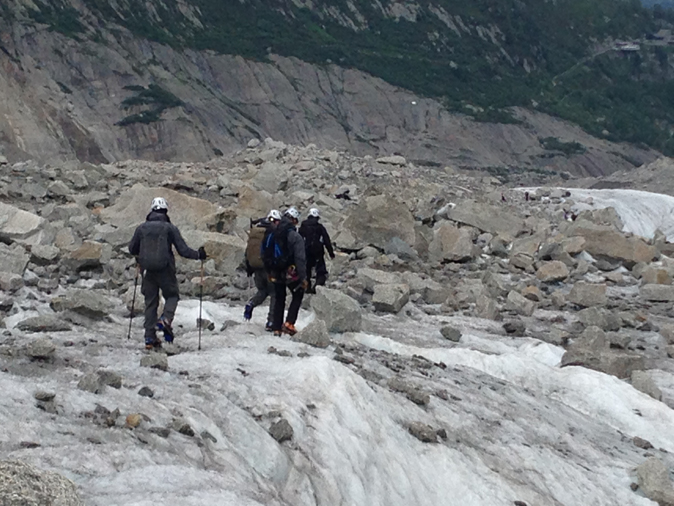