Bollinger B1 – Supply and Demand When it comes to automotive niches that are still essentially virgin territory, did you ever notice that your favorite 4x4s still aren’t being offered as electric vehicles? With the Chevy ZH2 we showed you in Issue 32, the reason certainly isn’t because existing technology can’t support a truck’s power requirements. So what gives? Why aren’t major automakers cranking out full-size, completely electric, honest-to-goodness trucks?

Robert Bollinger wondered the same thing. “I think they’re afraid it won’t make them money,” Bollinger says. “It’s so expensive to make electric, and major automakers are still playing with hybrids and smaller battery packs. All that’s great because it moves toward electric, but with full-on electric I think they’re worried about the money involved and range anxiety. They have billions of dollars from their other sales, and they’re still reluctant to make an all-electric vehicle as much as they should I think.” What happened next really speaks to that old saying about the mother of invention. “There were no electric vehicles on the market that I wanted,” Bollinger says. “So I dreamed up the exact vehicle I’d want that could handle all the jobs I wanted to do on my farm: hold long lumber, have high ground clearance, instant torque, four-wheel drive, short wheelbase, be its own power source for tools, and carry lots of dogs,” he says. The result was the formation of Bollinger Motors and the debut of the B1. It’s truly in a class all its own — when asked to categorize it, Robert calls it “the world’s first all-electric SUT,” or sport utility truck.

Some of you may be thinking that Tesla already beat them to the punch with the Model X, but let’s face it — the Model X is more of a minivan; many of us want a serious 4×4 rather than something that looks like it was built for hipsters worried about spilling their macchiato while driving to their next protest. Starting with a clean slate allowed a very practical approach to determining the best way to engineer every component, rather than trying to adapt new technology to an existing platform — something most major automakers always try first to save a few bucks. The design and overarching theme is simplicity. Aesthetics are reminiscent of a vintage Land Rover or International Scout; and that was meant to complement the vehicle’s pragmatic intentions. “Most electric vehicles nowadays are luxury and involve big interactive displays, they hook up to your smartphone and are heavily moving toward autonomous driving,” Bollinger says. “Our truck is hands on; it’ll never be autonomous, it won’t connect to your iPhone, and there’s no computer screen. It’s all about being tough and utilitarian.”

When it came to possibly becoming the next Preston Tucker and competing with those billion-dollar enterprises, Robert got into this venture somewhat serendipitously. “I didn’t think I could compete. I think ignorance is bliss, and when I said, ‘Hey, let’s do this,’ it was more of a gut feeling and a childhood dream. I’m glad I had that because it got us started. The big thing is that what we’re doing won’t compete with the big guys because we created our own DNA,” he says. However, an absence of competition doesn’t come without its caveats. The low volume not only means low competition, but because this niche remains largely unfilled and consumer interest has yet to overtake internal combustion technology, it also means there’s not much in the way of vendors and aftermarket support. Bollinger had to find ways to combine what’s out there, have components designed to his specifications, and engineer other items internally.

The architecture of the B1 and most of the components within are essentially proprietary. “We designed our own gearboxes, body, chassis, and suspension to handle our weight class rating of 10,001 pounds,” Bollinger says. To give you an idea of how that compares to what’s on the market now, it’s basically strong enough to be in the same class as an F-350 or Chevy 3500. The final truck itself will weigh around 5,000 pounds. Batteries, motors, and obvious components like headlights, seats, and tires are being outsourced for the moment, but this is essentially a ground-up build. It’s full-time all-wheel-drive with a self-leveling hydropneumatic suspension. A switch inside the vehicle can also be used to raise and lower it 5 inches each way, topping out at a max 20 inches of ground clearance. The 17-inch wheels all feature antilock brakes.

The basic layout of the drive system is roughly a two-part mirror image to avoid having a transaxle going from one end to the other while having power coming from two sources. The front and back each has its own motor mated to a two-speed gearbox, which in turn connects to two half shafts that go out to portal gear hubs. The in-wheel hubs defer the gears down to the wheels, creating better ground clearance. The wheels have speed sensors that talk to the VCU (vehicle control unit), so the brains of the truck know what’s happening. Even though the two motors operate independently of each other, they interact through software via a virtual differential in the middle, allowing power to be distributed the way you’d expect in a 4WD vehicle. The interior is stripped down and utilitarian. The dashboard can easily be removed so the owner can add extra gauges, switches, or lights if desired. In an effort to offer both left-hand and right-hand-drive versions, the cockpit is basically a mirror of itself so everything can easily be moved over when reconfiguring for foreign markets. The chassis and body are all aluminum, with the exception of a steel rollcage. The pass-through in the middle of the vehicle enables you to haul long lumber or any number of things you might not be able to in a typical truck.

The battery pack on the production models will feature a 120 kWh setup to help achieve Bollinger’s goal of a minimum 200-mile range. In city driving with lots of braking, the vehicle’s regenerative capabilities kick in and Bollinger says you’ll easily get well over 200 miles on a single charge in that environment. Active heating and cooling capabilities on the battery pack allow it to stay in an optimum temperature range to maximize performance and life span. Power density, price, and reliability were the main focus of the battery package Bollinger ultimately selected. 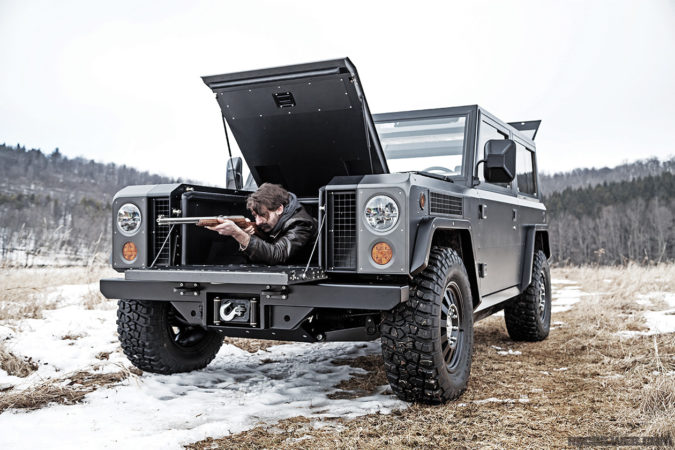 Rifle toting employees do not come standard. This is to give you an idea how much storage you have since engine placement deviates from tradition.

In 2017, the B1 was debuted at the Classic Car Club in Manhattan to great fanfare. At the moment, the two-door prototype is the only one in existence and their test bed, but the plan is to begin production with a four-door version in the fourth quarter of 2019, with delivery starting in early 2020. You can reserve one with zero money down and zero obligations, but you better get in line now. Orders at press time were over 16,000 and climbing. We tried to pin Robert down on what it’ll sticker for, but price and warranty formalities are still being worked out.

Maybe the larger automakers will try and play catch-up upon seeing the demand for this, but by then Bollinger may have cornered the market. Hard to say, but we’re sure it’ll be an interesting battle of wits and engineering. With the instant torque, quick zero-to-60s, zero emissions, and quiet performance, you may very well be seeing the birth of a company that’ll be with us for decades. This rendering shows the four-door version Bollinger intends to start production on in 2019.

WE Knife Banter: EDC Simplified [Hands-On Review]
What is "Long Range Shooting"?
The American Infantry Rifle and 25 Years of Lessons Learned
The $35,000 1911