If you’re someone under the age of 40, you may have a hard time accepting the concept of the 10mm Auto round. The entire notion sniffs of antiquated and debunked fudd-pseudoscience ballistic terms like “knockdown power” and “energy dump.” But here we’ll explore if there’s more to it — and also, of course, talk about the new B&T APC10 Pro.

In order to understand the origins of 10mm Automatic, one first has to understand the original approach regarding its development. Travel back more than 40 years to 1979 and you can start to get the idea. The most highly regarded defensive round at the time was the Speer Gold Dot 124-grain 357 Magnum, and the initial goal was to develop a comparable load that could be fed in a semiautomatic weapon that was smaller than a howitzer.

Initially, the 10mm Auto fit the bill. But with an energy level equaling the 41 Magnum combined with a high-pressure curve, users quickly began developing an awful flinch reflex when firing. Reduced-pressure 10mm Auto loads became the norm, and a new caliber war ignited both across the gun community and law enforcement.

The real first major proponent of the 10mm Auto was the FBI. After the Miami Shootout in 1986 (see RECOIL Issue 39 for a full article), the FBI deep-dived into penetration testing. For a short time, the subsonic, 9mm 147-grain Winchester JHP was the round of choice. 10mm Auto seemed like the answer to everyone’s ballistic prayers, but the Bureau downloaded it to 950 fps and used a 180-grain Sierra JHP, dubbed “FBI 10mm Light.”

10mm Auto itself required the use of a larger-framed pistol than 9mm due to its overall length, and ultimately Smith & Wesson developed the 40 S&W, which was virtually identical to the FBI’s downloaded 10mm Auto but could be used in a smaller frame. Yes, a virtual American-copy of the Israeli 41Action Express, 40 S&W became the Joffrey-king of the caliber wars until around 2010, when 9mm rightfully took the throne. Though most modern 9mm defensive loads do well in FBI testing protocols regarding their performance on humans, there’s one major category in which 10mm Auto excels: penetration. Even the most robust 9mm advocate may sometimes carry a 10mm Auto Glock 20 in a chest holster while in the backwoods. In case of grizzly bears.

There have been many, many loads and chamberings throughout modern history that never caught on, and even more that peaked in popularity a long time ago. 10mm Auto is a caliber often asked for due to its fervent fans, who are slightly more annoying than fans of Justin Bieber.

And it was those 10mm Auto Beliebers who wrote the request letters. Regardless of who to thank or who to blame, the B&T APC10 Pro is a pleasing addition to their growing family. Don’t call it a company that doesn’t listen to its customers.

If you’re at all familiar with the B&T APC family of weapons, then the APC10 Pro is going to be very familiar (see RECOIL Issue 45 for the full review of the APC 9K Pro). Gone is the reciprocating charging handle of the Gen 1, and a pair of dual, self-folding non-reciprocating handles takes its place. The ambidextrous selector is much easier to use than the legacy version, and the pistol grip can now be swapped.

In addition to the ambi selector, the APC10 Pro also has an ambidextrous magazine release and bolt-locking controls. But we do have some notes about the quirks of this setup. While both magazine releases are natural to find, the magazine release on the left side of the gun is easier to depress. Both absolutely work, but an empty magazine drops free more quickly when using the left-side. The selector itself is European style, just as it is on other B&T firearms. This means that the safety can be moved to “safe” regardless of the status of the rifle. Hammer forward? Still goes to safe. This is different than your standard AR-15 selector. The bolt itself has a lot more mass than the equivalent 9mm, as it should to accommodate the much higher-pressure 10mm Auto.

The bolt controls make it supremely easy to lock the bolt to the rear for administrative use or malfunction clearance. With that said, releasing the bolt is kind of a chore, due to the combination of the short bolt operating distance and heavier springs required to tame a 10mm Auto. When swapping mags, just grabbing the charging handle to release the bolt was much easier to accomplish. It’s not quite HK-slap cool, but we’d take one of these over an MP5/10. Sorry not sorry, FBI. The receiver and handguard, if you can call it that, are made from a single piece of extruded aluminum. There’s a full-length Picatinny top rail for mounting of sights, optics, and other accessories, and there are three short pieces of Picatinny at the nose for grips and weapon lights. The 6.9-inch barrel is topped off with a three-lug mount, and there are options and adapters galore for that subgun-standard.

The collapsing stock is intuitive and makes for a package a touch under 15 inches in overall length for storage and transport. For magazines, B&T opted to go to the aftermarket, instead of cranking out their own. The APC10 Pro feeds from 10mm Auto Glock magazines. While initially this may seem a little strange, as a standard Glock 10mm Auto magazine holds 15 rounds, the advent of the Kriss Vector chambered in 10mm Auto made for a robust market for magazine extensions.

Insofar as operation, saying that the APC10 Pro is “blowback” is technically correct — but there’s a lot more going on here. As with other B&T firearms, the attention to detail is impeccable. That isn’t a reference to aesthetics either; having obsessively tight tolerances ensures the massive bolt carrier doesn’t stutter or chatter throughout the operation.

Like the APC9k Pro and other calibers before it, the APC10 Pro has B&T’s proprietary hydraulic buffer arrangement in addition to a strong recoil spring, and that buffer does a great job of slowing the bolt just before that 1-pound, 11-ounce brick of steel hits the back of the receiver. 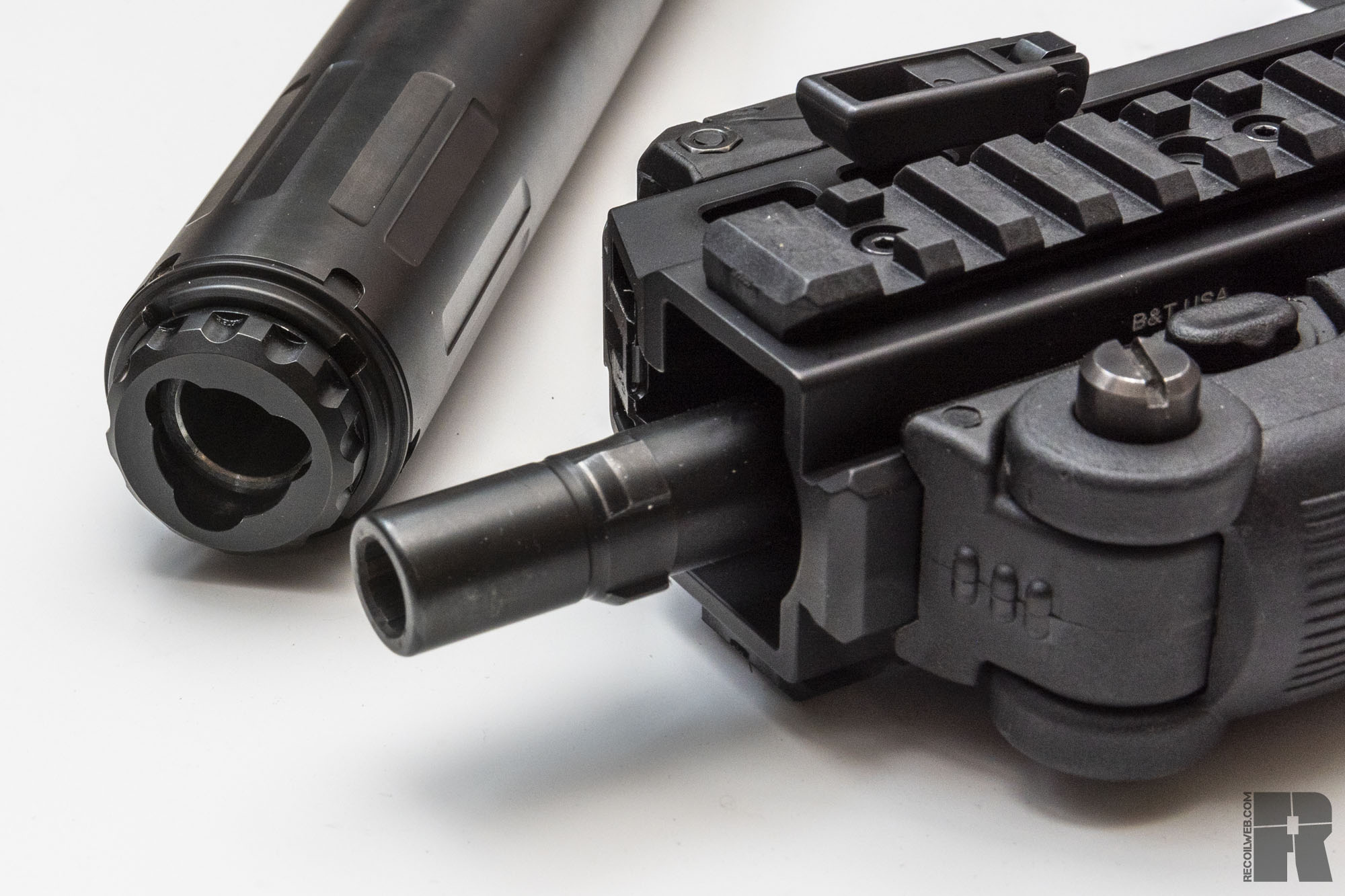 We’ve all seen weapons with two takedown pins on a receiver or trigger module, and B&T has those too. After unloading and clearing the APC10 Pro, the captive takedown pins are pushed out and the module can be removed.

Then, the stock assembly can be swung out in order for the bolt and recoil spring assembly to be removed. The charging handles remain in the upper during normal disassembly and assembly.

We started off with a Vortex SPARC AR red dot, which runs for 50,000 hours on a single AAA battery. An MP7ish grip was robbed from a CAA Roni, and it took some reinforcement via plastic-welding in order to reduce flex.

For the silencer, we went with a Griffin Armament Bushwhacker 46 (see RECOIL Issue 47 for more details). This suppressor was specifically made for much more powerful ammunition such as 458 SOCOM, so it’ll eat select-fire 10mm Auto all day. Since Griffin Armament makes a three-lug adapter for 1.375×24 TPI threads, all manner of other silencers could be used — just make sure it’s rated for 10mm Auto first, or you could wind up splitting the tube.

For magazines, we went with a mix of Kriss magazines, OEM Glock mags, and some Glock mags with Henning Group +3 extensions. Though 10mm Auto doesn’t quite pass the “Walmart Test,” there should be several ammo options at any well-stocked LGS. We hit the range with more than a half-dozen loads, ranging from cheapo Freedom Munitions to Hornady Critical Duty.
Hornady and Speer both displayed excellent performance regarding their defensive ammunition, and Sig Sauer had the most consistent FMJ ammo of everything we tested.

The only ammunition we had problems with was 180-grain Remington UMC. The projectiles consistently rammed against the feed ramp and backed into the case. This can cause dangerous overpressures (see Mike Searson’s article elsewhere in this issue). The APC 10’s rate of fire is listed as 920 rpm, which is just slightly faster than the APC45 Pro. B&T takes a lot of care when it comes to balancing the bolt weight, recoil spring assembly, and their proprietary hydraulic buffer system.

The first thing to do is not mistake the APC10 Pro for a 9mm subgun — this is distinctively a heavier caliber despite being a mere millimeter wider. We’re talking about a fully automatic subgun loaded with bear-killing bullets, which admittedly sounds pretty cool.

With full-power 10mm Auto loads, we rate it as being similar to haranguing a 45ACP MAC-10 with a VFG — not difficult with a little training but definitely not for everyone. Load it with an FBI Light 10mm Auto clone? Better than the MP5/10 with the same.

Either due to this increased recoil or an anatomy issue, as the author has childlike hands, we did experience some rubbing of the ambidextrous selector on the trigger finger. This was only present in semi-auto, as the selector is completely out of the way when you’re banging from the third position. However, this was far from universal, as @RECOILboss Iain Harrison had no such problems when shooting the APC10. Just something to watch out for, and a little bit of filing yourself would get that right out of the way if it ever crops up. 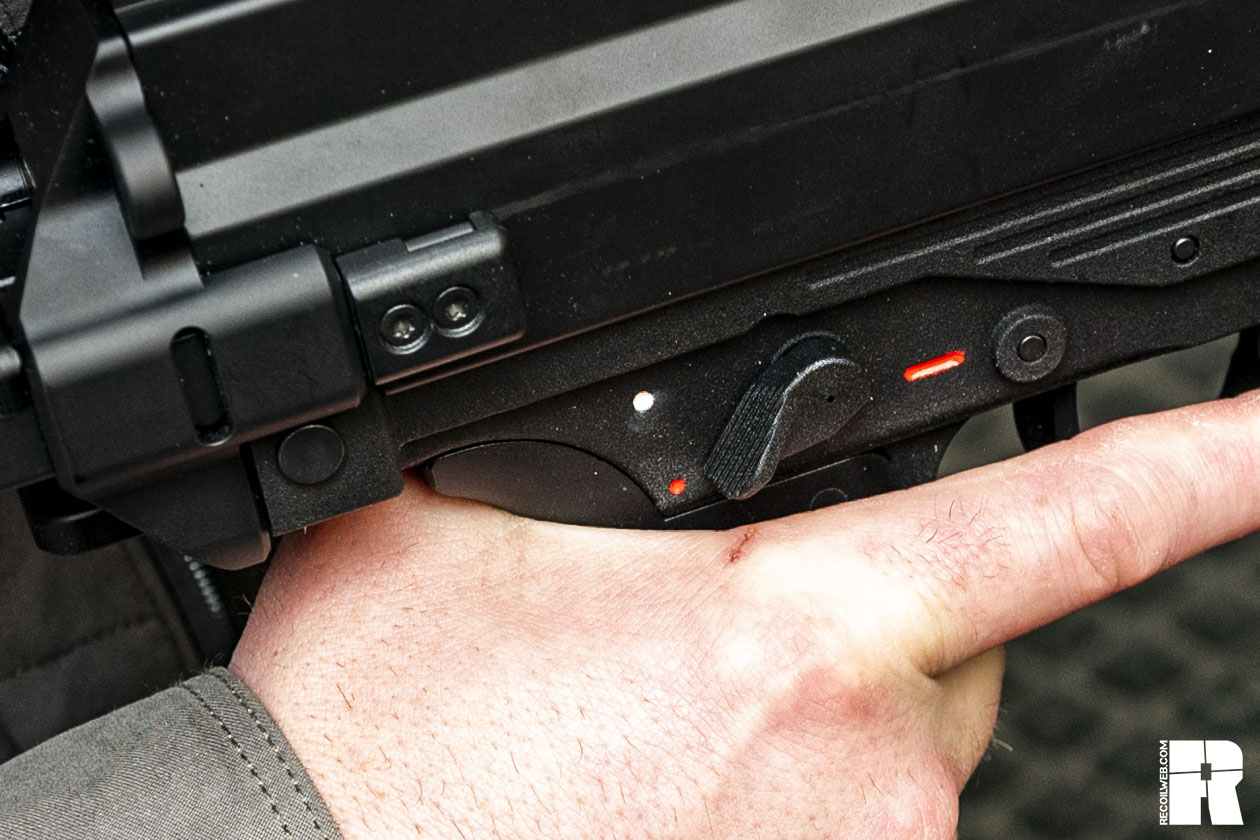 Though we poke fun of them, about half, well, maybe a quarter of the RECOIL staff is some form of 10mm Auto Belieber. In the modern world, 10mm Auto does have a place, and if you ever find yourself attacked by a gaggle of gonorrhea-infected grizzlies? This is far more portable than an M2HB 50BMG, and a perfect complement to your G20 woods gun.