Home » Featured » Bullet Points: Top 5 Get Off Me Guns

Bullet Points: Top 5 Get Off Me Guns 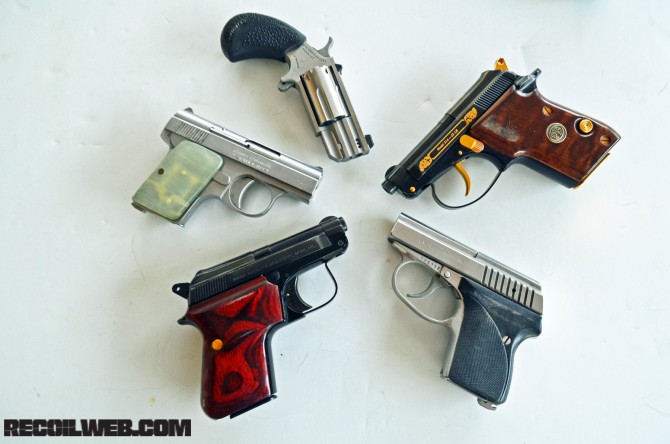 They go by a variety of names: mouse guns, pocket guns, nostril guns, hideouts, BUGs (Back Up Guns) or GOM guns (Get off Me guns). Today we look at five pint sized pistols some folks love to hate and other shooters carry by necessity.

For a concealed carry pistol, most shooters go for the smallest piece they can find. One of the problems with that is finding a small pistol in a suitable caliber, which of course then sparks up the ‘suitable caliber' debate. Conventional wisdom dictates that the minimum caliber is .380 ACP in autos or 38 Special in revolvers. Anything less than that is considered a joke to most of us.

But to every rule there are exceptions. 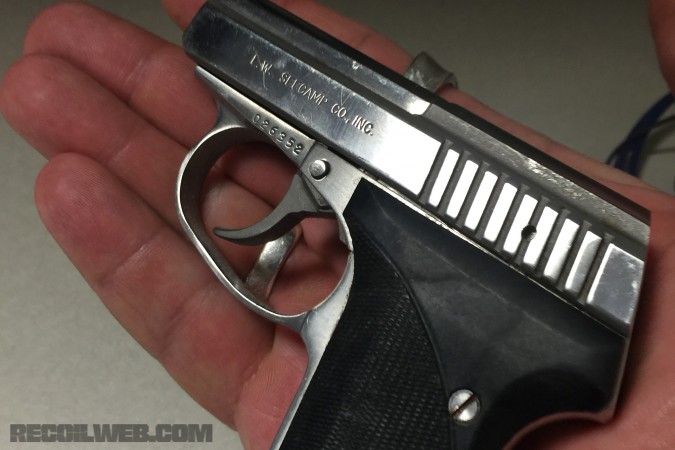 GOM Guns: Get Off Me

Obviously mouse gun or nostril gun is a derisive term referring to the lack of power attributed to many of these types of pistols. It implies they are only shootable for shooting mice or are only effective if screwed up the bad guy’s nostril and emptied into his brain.

Most of us are familiar with the term BUG, or “Back Up Gun.” Should your primary firearm becomes unusable or inaccessible for whatever reason, you go to the secondary piece. Many on duty LEOs, and in fact a number of armed citizens, carry a BUG. The former will often carry a BUG on their ankle, under the armpit in their vest, in the pocket opposite their service weapon, even in a double handcuff case.  Armed citizens are equally creative.

A hideout is typically used in the realm of a working undercover police officer or government agent. These last ditch weapons are intended for deep concealment and prioritize that virtue over penetration limitations of the round. It satisfies the number one rule of any gunfight: have a gun!

A GOM gun is still a bit different. The concept here is “Dynamic Cover”; or, to make the most unlikely comparison in history, think of it as the same principle behind a machine gun in delivering suppressing fire.

The primary purpose of full auto fire in combat is suppression, i.e. forcing the enemy take cover or keep their heads down while the fireteam or squad advances on an objective, make a withdrawal, or otherwise performs a necessary maneuver.

On a battlefield you may need 5.56 or 7.62 NATO for suppression. In an urban street fight situation, particularly corps-à-corps, any gunshot will likely suffice. People don't want to get shot, regardless of what caliber you're using for social work. If six shots of .22 Short can get you to a bigger firearm, get you away from a group of attackers or make an ambush predator release you from a rear naked choke hold, then there is some merit to servicing them with .22 Short.

Bullet Points: Top 5 Get Off Me Guns Making its debut in 1950 was the Beretta 950. Two calibers were offered: .25 ACP (Jetfire) and .22 Short (Minx). These single action, aluminum framed blowback pistols featured a tip-up barrel to make chambering a round easier for women, the elderly and infirm (although racking the slide is still extremely easy). As neat as the little 950 pistols were, the grip frame was small, the .22 Short was considered a joke and by the mid-1980s, the shooting public was going mad for double action autos.

Beretta responded with the Model 20 in .25 ACP and revamped it with the Model 21A (Bobcat) in both .25 ACP and .22lr. The double action trigger made it easier to draw and fire from the pocket as opposed to having to remember to cock the hammer on the 950. The longer grip frame gave an extra round or two of capacity and made it a bit more comfortable to shoot. Stepping away from the Berettas, we now take a look at the Mini Revolvers of North American Arms. Possibly the smallest capable firearms on the market, we occasionally slip one of these into our pocket (usually in a DeSantis pocket holster) at least twice a month. 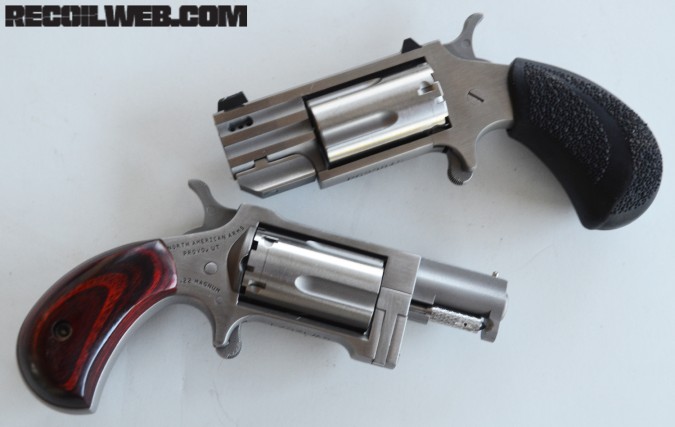 NAA’s stainless steel, spur trigger single action revolvers are chambered in either .22 lr or .22 Magnum. We run partial to the Magnum varieties.One of the hallmarks of NAA is that they constantly seek feedback and improvement from their customer base. This has ushered in versions with rubber grips, barrel porting and big dot tritium sights in the form of the Pug or an actual swing-out cylinder (as opposed to having to physically remove the cylinder for loading and unloading) in the incarnation known as the Sidewinder.Despite rumors to the contrary, with enough practice these little revolvers can be quite accurate at close range.

One of the original GOMs was a small semi-auto in .25 ACP known as the Colt 1908 Vest Pocket Pistol. It was designed by the inventor of the 1911, Browning Auto-5 shotgun, Browning Hi Power, M2 Machine gun and just about every lever action rifle or pump action shotgun ever produced by Winchester (yes, we refer that most American of gun saints, John Moses Browning).

In 1934 while at Fabrique Nationale, Browning refined the design by eliminating the grip safety and magazine safety of the older model.

The caliber left much to be desired, but no one could complain about its small size, concealability and reliability. FN manufactured the pistol until 1979, but the Gun Control Act of 1968 stopped their importation to the US. From 1974 until the early 1980s an unlicensed reproduction was manufactured in the United States by Bauer Firearms of Fraser, Michigan, with two improvements: stainless steel construction and polymer imitation pearl grips.

Considering the remainder of the pistol was identical to the original design, we see a loaded chamber indicator, a safety that is contained beneath the grip panel and a striker in lieu of a hammer and firing pin. Browning was way ahead of his time and we find the Bauer to be one of the most reliable versions of this baby pistol.

Last but not least, we come to the Seecamp LWS. Of all the pistols previously mentioned, this is perhaps the only gun we’ve listed you could use as, well, an ‘only gun,’, i.e. carry solo and not feel under-gunned. Originally chambered in 25 ACP, Ludwig Seecamp designed his most popular version around the Winchester Silvertip round in 32 ACP while keeping it close in size to the popular 25 ACP offerings we mentioned.

It is often referred to as the pistol Col Jeff Cooper would carry in hell: double action only, magazine safety, .32 ACP caliber and no sights.

Seecamp was going for the ultimate in snag free concealability and despite the lack of sights we have successfully and consistently made head shots well out past 30 feet with the pistol.

There is a technique involved but lack of space prevents us from going into it at this time – if you’re interested in the training regimen that led to this, let us know in the comments. They may not help you win a shooting match or take a bad guy down with a single shot, but these little pistols definitely have their place. Keep in mind this list is by no means all inclusive. They simply represent some of the more reliable versions we’ve come to favor over the years when needing to conceal a pistol smaller than a pack of cigarettes.

Your thoughs on GOMs?