A Force Multiplier in the Police K9 World

In police work, canines are hugely significant force multipliers — and the numbers don’t lie. The Lansing Building Search study in Michigan showed that a building search for two bad guys with two-man teams of patrol officers recorded a 59-percent success rate in locating the individuals. Compare that to a K9 unit, boasting a 93-percent success rate and requiring a fraction of the time to conduct the search.

While there’s little doubt about a dog’s utility, they’re only an extension of their handler and his or her limitations. Technology can help handlers overcome these shortcomings and create a more effective K9 unit. 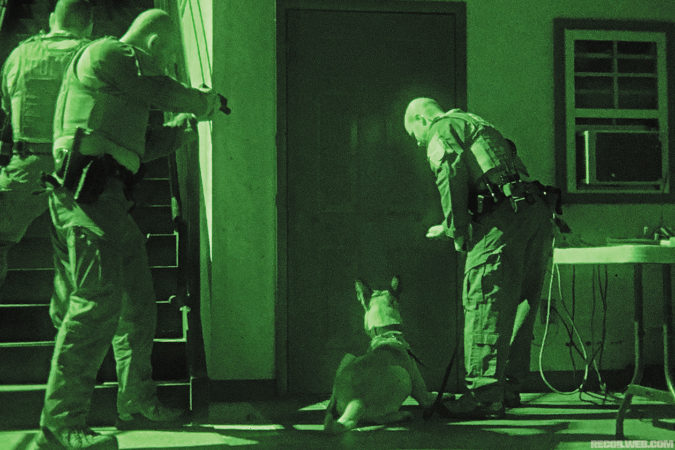 Two deficiencies addressed by technical solutions are night vision and communication. Night vision goggles (NVG) have been available to civilian law enforcement agencies in SWAT applications for decades, but they’re often overlooked for canine handlers. While early adopters certainly had difficulty with depth perception when using NVGs, that was then. Now, a good quality, dual-tube setup and proper training erase any comparisons to the early days of tanker goggles.

Tripping Along Without Light Is Not Fantastic
Generally speaking, a dog is much more accustomed to working in the dark; paired with their excellent sense of smell, it isn’t hard to see how nighttime operations can lead to a canine being hindered by the handler. The best-case scenario has a handler fumbling through the dark and slowing down his dog. The worst-case finds the disoriented handler initiating unintentional corrections through the leash or harness that distract or prevent the dog from finding its intended target.

A dog can only go as far and as fast as his human. This is especially true in thicker woodland terrain where the handler often has to stop the dog to get his bearings. Utilizing night vision devices provides the handler with some degree of parity with his or her dog’s heightened senses. This allows the handler to work in the darkness, which is a great tactical benefit.

Randy Roy, of Guardian Point, is a former police officer and canine handler, and was a canine trainer for U.S. Special Operations Command on Fort Bragg for nine years. “With night vision goggles,” says Roy, “a handler is able to utilize much better tactics and have white light discipline while on the track of a bad guy who doesn’t want to be found.”

Not looking like the night watchman traipsing through the woods is a good thing and ultimately increases your likelihood of success and, more importantly, safety. Handheld thermal units allow the scanning of areas that are shielded by tree canopy from overhead observation.

Anecdotes are far from established scientific fact, but in my seven years of running canine calls, I’ve had the opportunity to interview several arrestees after the fact who admitted to seeing my team and our flashlights as we were approaching. Luckily, those guys also admitted that seeing the lights — accompanied with a canine — is what forced them to show themselves and surrender.

While night vision goggles are great for getting you on the level with your dog, Forward Looking Infrared (FLIR) is another tool in use by some forward-looking agencies. A thermal camera is something the law enforcement community has come to expect on helicopters, but handheld infrared units like the EOTech x640 are easy to procure and even easier to use.

Thanks to thick tree canopies and manmade obstacles, airborne units are often hampered in their ability to provide heat signature based intelligence to officers on the ground. Handheld units can be a valuable tool for a backup officer to have on hand. They allow an officer to scout a potentially dangerous area that might not be accessible to a FLIR unit from the air.

Another deficiency that technology addresses is communication. Those two are inextricably linked, as your dog can be considered for all practical purposes, nonverbal. Since the dog can’t speak to his handler, it’s up to the handler to read body language to find out on what’s going through the dog’s head. Without night vision goggles, it’s difficult to read a dog at night without using light, something we already identified as being potentially dangerous in the vicinity of a bad guy. Since NVGs provide the ability to see what a dog is doing during the night, so-equipped handlers can see how they’re responding when they’re on a track. A well outfitted NVG rig can cost more than a good used car, but only one will help you find bad guys in the woods.

With night vision allowing handlers to see the world around them and read their dogs nonverbal cues, the next bit of helpful canine tech helps handlers communicate commands to the dog. One of the best devices for doing that is the electronic training collar, e-collar for short.

Note: There are plenty of ways to utilize this piece of equipment improperly and do far more harm than good. As with everything, seek out good training from reputable sources. Don’t rely on a piece of equipment as a substitute for mastering the basics.

E-Collar
Today’s electronic collars are adjustable for a variety of stimulation settings to allow the handler or trainer to get their dog’s attention in many situations. Think about it this way — if you’re trying to get someone’s attention during a church service, you’d lightly tap them on the shoulder or speak very softly to get their attention. This is the equivalent of a low level of stimulation with an electronic training collar. Properly utilizing an e-collar is a great way for a handler to stay in control of a canine while working off-leash.

Conversely, if you were trying to get a person’s attention at a rock concert, that same soft tap on the shoulder won’t work. You may have to yell or slap that person on the shoulder to get their attention because the environment around them prohibits them from hearing or feeling you. This is the equivalent of a higher level of stimulation from an electronic training collar.

“An e-collar allows a handler to dial a necessary level of stimulation based on the requirements of the environment and its associated distractions,” says our former cop and canine handler. “Being able to get a dog’s attention at distance, untethered from a leash is a huge advantage in progressing a dog’s training.” Beyond training applications, the e-collar is great for deployment scenarios because the dog is allowed to work unhindered by a leash while the handler and backup officers can remain safe, behind cover, if the situation dictates.

Keep in mind that the e-collar isn’t just for training. It can also allow canine handlers to work more effectively in large structure or area searches. With an electronic collar, the handler can send the dog out on a search, and without having to make any loud verbal commands, place the dog in a down via the collar to perform a secondary sweep while clearing all the way to the canine’s location.

Similarly, an e-collar allows a handler to release the dog on a large area search more efficiently. There’s no leash for the dog to get tangled, and if the suspect is dangerous, the canine can assume the risk for the officers on scene. That assumption of risk gives the officers the ability to go home to their family at the end of the shift.

Most modern e-collars have a vibrate feature that can tell the dog to return to the handler without any verbal commands. Without the need to talk, patrol officers have one more way to avoid giving away their position to a bad guy, increasing their power in the situation at hand. Drone Dogs
One of the more interesting technologies shaping the world of military and law enforcement canine use involves what the folks over at CQB K9 are doing. The owner, Alex Dunbar, told us about some of the advancements that he’s making with dogs on the ground and incorporating UAS, or “drone” technology.

First, a dog is equipped with a head-mounted camera system and transmitter linked to a monitor at the handler’s station. Once the dog is sent out on a search, the handler observes through the monitor what the dog is seeing up to 10 kilometers away. Simultaneously, an overhead drone observes the canine working with either a daylight or infrared camera. The information is overlaid on a Google map, giving the team a unique view of the search that shows the locations where the canine has been, and areas that need further investigation. “Discrete communication with the canine is also incorporated to the system,” says Dunbar, “so the handler is able to send commands to the dog such as ‘search,’ ‘down,’ and ‘return to the handler.’ While this might not be practical for urban or suburban street cops, this could be a boon for anyone in a search and rescue role in rural or mountainous terrain where it’s not always practical to run a tethered dog.

Indoor GPS
Another intriguing technology is Priority One Canine’s GPS-like indoor tracking device. Wade Morrell, a former marine, police officer, and CEO of Priority One Canine says, “We are able to equip canines with a GPS-like tracking device that works inside of buildings. Once a canine is sent into a building search, the footprint of that dog’s search is then transmitted on a visible display back at the handler’s position.” The handler can determine exactly what was searched by the K9 unit, and what wasn’t. This tech gives incident commanders a greater understanding of what’s happening in the field. It gives handlers a way to relay real-time information to a command post in a developing, complex situation. And we know that better intel leads to better decisions. Usually.

Seeing is Believing
Filming an exercise or operation from an aircraft or drone allows handlers to see how they did and learn what they can do to improve their searches on their next call out. Additionally, a ruggedized camera, such as the tactical Mohoc Camera system, which uses a proprietary canine head harness, can capture additional footage from the dog’s point of view for AAR use, or possibly as evidence. This head-mounted camera rig from Mohoc allows you to review events from the canine’s perspective.

Technology is ever advancing; the pace of developments of new gear and the associated tactics show no sign of slowing. Military units and federal and local law enforcement agencies risk relegating their canine units to antiquity, lest they invest in newer tools and training that allow them to stay efficient, effective, and most importantly, safer as they work to protect the masses from harm.