Buddies in my inner circle will vehemently argue that the MP5 is the greatest subgun ever made. Shoot one and it is hard to wipe the shit-eating grin off your face. Unfortunately for many, the MP5 is a unicorn. This may explain the rapidly growing market for such MP5-like firearms as the Sig Sauer MPX, Desert Tech MDR and CZ Scorpion. They have all taken design queues from the MP5.

I personally had the chance to drive those aforementioned guns and in my opinion, the MDR and CZ Scorpion are as close as it gets to the MP5 ergonomically. Since the MDR is still a prototype, I am going to cover the CZ Scorpion basics and the ever-growing aftermarket support for it. There are two variants for the Scorpion EVO, the A1 and the S1. The A1, released in 2012 to law enforcement and military only, is a select fire 9mm SBR. Its not-so-little brother is the S1, a semi-automatic pistol version of the A1. I will be only covering the S1 variant since the A1 is not (yet?) available to the general public.

With an MSRP of $849 and a street price around $730, the EVO S1 is a very attractive platform. It shares some of my favorite characteristics of the MP5, which are a side-charging handle that locks back and up, safety, grip angle and European-style mag release. Other added benefits are ambidextrous controls, cold hammer forged barrel and bolt and a removable trigger pack.

The EVO S1 is soft shooting, comfortable and fun. It is a gun I think anyone could learn to shoot well and is easily upgradeable. Since it comes in pistol form, you can add your favorite pistol stabilizing system or SBR it, which I will talk about below.

The Scorpion is not without its flaws. I would have liked to have seen removable Picatinny rails so the forend could be customized for the shooter’s hand. I find the rails to be sharp, which can be mitigated with gloves or rail covers. Other minor issues are the safety levers, which tend to get in the way of your grip while shooting. CZ quickly realized the issue and proactively did an initial run of 1000 safety delete caps. They sold out quick only to realize the design was not ambidextrous. A new design is in the final stages of being released. Lastly, part of the allure of owning an SBR is to have the ability to suppress it. With the Scorpion being European designed and manufactured, they obviously used an 18x1RH thread pitch, which sucks because nearly every possible device you can attach is 1/2×28 or 1/2×36. Luckily there is a fix available for that I mention below.

That is it for criticism, which are minuscule compared how sweet the EVO is to shoot. Enough about the highs and lows of the EVO platform, let's talk about upgrades. As I mentioned earlier, the aftermarket is heating up for the EVO, and new items are coming out everyday. I hope to capture a good variety of options here to showcase how viable the EVO is becoming compared to the MP5.

One thing I know that is on the minds of many EVO owners is the ability to SBR. I spoke to CZ in preparation for this article, and they confirmed a 922r compliant SBR kit will be available by the end of summer. If you are not familiar with what 922r is, here is the short and skinny. 922r prevents a person from making a rifle using more than 10 of the parts listed in 27 CFR 478.39, if the resulting rifle would be “non-sporting” under federal law. A Scorpion SBR would be “non-sporting” under federal law. CZ USA posted a diagram highlighting 16 Czech made parts found on the Scorpion. In order to make the Scorpion into a 922r compliant rifle, you will need to replace six Czech made parts with US made parts, bringing the Czech made count down to ten. The CZ 922r kit will replace seven parts in total, the butt stock, pistol grip, (2) magazine followers, (2) magazine floor plates, flash hider, trigger and disconnector, making the gun 922r compliant. The last step would be to register it as a SBR with the ATF NFA Branch. Manticore Arms
Manticore makes many upgrades for niche firearms such as the Tavor, AUG and AK. They have two new products currently available for the Scorpion with a sick-looking stock on the horizon. The E3 lever is short-throw lever that replaces the factory lever. MSRP is $24.95. In addition, Manitcore makes a direct replacement flash hider dubbed the Eclipse. MSRP is $39.95. We were able to get some prototype photos of a new stock they are developing. No word on an availability date. Hera Arms
Imported by LanWorld Inc, the Side Folder Unit (SFU) allows for the use of a standard AR-15 style tube to be attached and folded. MSRP is $115. 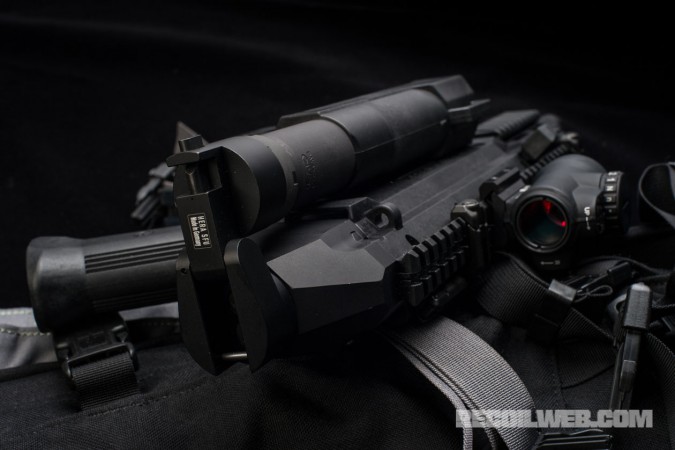 CZ Custom Shop
CZ Shadow fans know who these guys are. They make some bad-ass shit to say the least. Their Scorpion line is impressive and growing. They even do trigger jobs.

Want to dress up your EVO with sexiness, how about a Fluted Stainless Barrel? This barrel is already threaded and extended to accommodate your 1/2×28 suppressor. MSRP is $187.85 and requires professional installation offered by the custom shop. 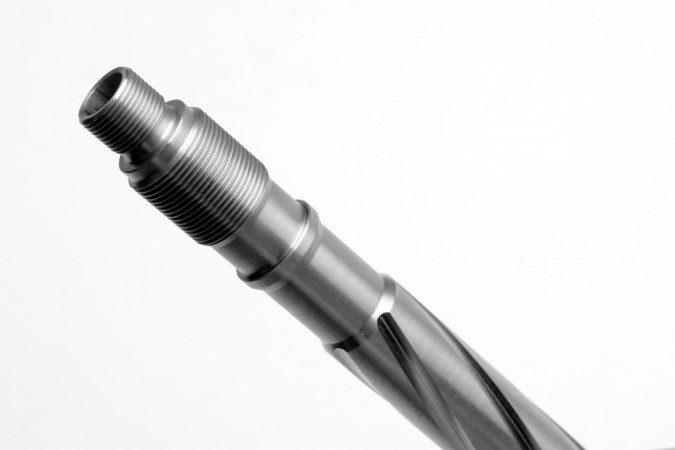 Another option for those who want a folding stock. CZ Custom makes a direct mount adapter. MSRP is $187.80 Want to actually use your 9mm suppressor with your EVO? Here is a less expensive option to convert the 18mm thread to 1/2×28. MSRP is $59.98 Don’t like the factory “flash hider?” They offer a line of 18mmx1RH compensators for EVO. Not sure if a semi-auto 9mm needs a comp, but why not? MSRP is $98.46 HB Industries
HB manufacturers and designs a few options to make the EVO a little more user friendly. They make a safety delete button and an AK Style selector. MSRP for the safety delete is $13.50 and $28.90 for the AK version safety. KAK
KAK took the pistol market by storm this year when they announced collaboration with Shockwave to manufacturer an AR-15 style tube to work with the Blade. They offer complete CZ packages including the necessary parts to attach to your Scorpion. MSRP starting at $48.95 with complete packages for $125. 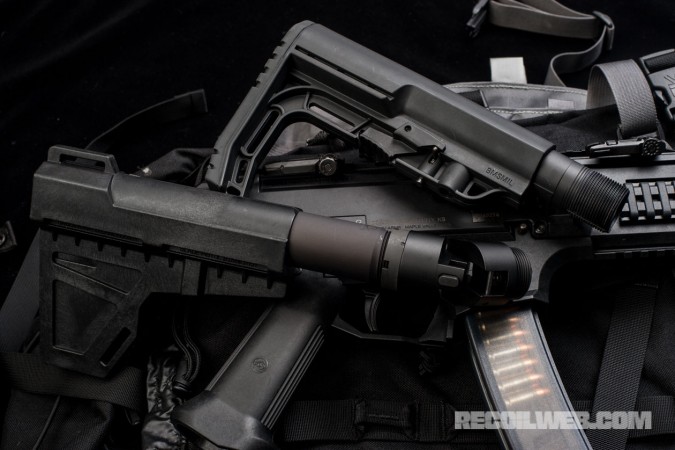 Thordsen Customs
Thordsen makes several rifle stock options for states that ban stocks. One of the highlights in their line-up is the cheek rest kit, which features a proprietary buffer tube, sleeve and cheek rest.