The year was 2008 and the time had come to reconsider what a compact 9mm carbine would look like in the modern world. The long-standing survivors of the '70s and '80s arms races were beginning to face being put out to pasture, and by 2009, the CZ Scorpion entered the fray of what would eventually be called Pistol Caliber Carbines and large frame Pistols, as the term Submachinegun wasn't exactly accurate and turned the wrong heads. The list of PCC's was getting longer by the day, and in the frenzy, no one was safe as the world tried to sort out which one would live long enough to challenge the fame of the MP5.

One element of sorting through the top players would be to look at how much aftermarket support they could gather. Modularity defines modern firearms, and taking advantage of that, the CZ Scorpion reversed much of its early criticisms through their own efforts, supported by growing aftermarket interest. When both giants like Magpul and flexible problem-solvers like HB industries were supporting the PCC, the writing was on the wall: the CZ Scorpion was here to stay.

Out of the Box

For those familiar with the control and feel of an AR-15, the CZ Scorpion feels distinctly European out of the box. With a non-reciprocating charging handle hanging out of the side of the rail, and a paddle-style magazine release, the pistol itself gives the impression of being both at home and a little awkward. In no time, the awkwardness dissipates, and leaves little hints of how the PCC could be adjusted this way and that to make a competition carbine or defense tool.

We looked to Magpul, HB Industries, SB Tactical, and Timney Triggers to make smooth out some edges and sharpen others, and the result was a carbine that looked like the teenage years of the CZ Scorpion had given way to something familiar and new at the same time. Disassembling the CZ Scorpion requires patience. It's not as easy as it looks.

Some things had to change, and some needed only a little tweaking. We wanted more rail space, and the grip angle made traditional A2 grips from early AR-15's look nearly verticle. The safety, mag release, and charging handle would face scrutiny, an the trigger needed work. Only the Barrel and Receiver were left unchanged.

The guts of the gun come out with relative ease, once you figure it out. HB Industries provided a series of safety selectors to choose from. Out of the box, the CZ Scorpion comes with ambidextrous controls, but combined with the grip angle, a “high tang” grip puts the stud of offhand safety right at the base of the trigger finger. Instead of simply deleting it, however, the AK Style Safety Selector from HB Industries caught our attention. The short lever pointing toward the muzzle works in the opposite direction of an AK, down to safe, up to fire. When on “fire” the lever sits right where your finger should be when not on the trigger. When on safe, the safety lever creates a shelf to rest that finger on. Positive controls for uncertain situations.

Choosing a magazine release took more time, because the stock option felt solid and could be reached with the trigger finger. However, adding a lower paddle would give without asking for much. The HB Industries options are more robust, machined out of aluminum. Wider paddles for competition, or flatter ones for more “tactical” scenarios, it's a game of choosing your shape. 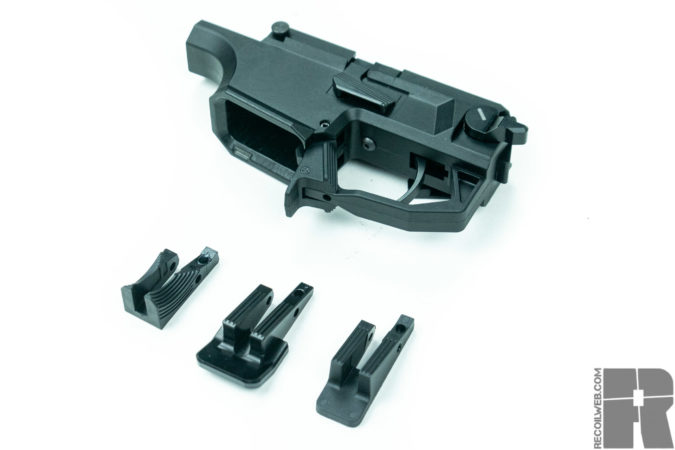 In the Gun: Magpul's CZ Scorpion Mag Release. Below left to right: stock, and two options from HB Industries.

When Timney Triggers released a drop-in replacement for the CZ Scorpion, it immediately changed the prospect of the firearm. For years, the stock trigger drew ire, and not purely for its performance. Perhaps we're a bit spoiled with crisp 3-pound triggers in our AR's, but leave it to American gunsmiths to come up with solutions. The more recent OEM triggers are adjustable, but we couldn't resist adding some Timney Magic. The muzzle end of the CZ Scorpion gave it an iconic look, and swam against the stream of flat-nosed fore ends. The modularity of modern firearms, however, has been driven by our desire to add the lights, lasers, training tools, and sights of our choice. The OEM rail does not take advantage of the CZ Scorpion's 7.72-inch barrel. Shorter barrels, unless integrally suppressed, mean less real estate to mount those lights and lasers.

HB Industries brought another solution to the table with its rail system. Picatinny on top, with M-Lok on the 3, 6, and 9 o'clock, they reclaimed lost ground and fundamentally changed the aesthetic of the CZ Scorpion. With a charging handle reminiscent of the MP5, HB Industries reached into multiple sub-genres with their options. Polymer or aluminum, brightly colored or flat black, there's options for all applications.

Comically, it's easier to replace the pistol grip on a CZ Scorpion than it is on an AR-15. We've taken a look at other options in the past, but Magpul's MOE-EVO Grip stood out as a newer option. After years of using Magpul furniture, adding something familiar tied the firearm together. The original Iron Sights from CZ made the cut. Out of the Box, the Vortex Sparc SolAR gives the end-user options ideal for a firearm of this design. Even as we're seeing more and more tall mounts for red dots, the Sparc SolAR comes with both an AR-15 lower 1/3 co-witness option, and a low mount. The short base effectively turns it into a lower 1/3 co-witness for the CZ Scorpion.

The SB Tactical Brace is in high demand for good reason. Folding toward the ejection port side, the firearm can be fired, and all controls reached in either configuration. The assembly has no wobble or rattle when shaken.

Topping off the whole firearm, The CZ Scorpion ships with a flash hider, but HB Industries makes a Micro Compensator. They look similar, and until we add a suppressor, we're opting for the comp.

From the beginning, the CZ Scorpion caught attention for being both reliable and affordable. In a world of $1500 PCC's, the CZ Scorpion can still be found for just under $1000, even during the surge in gun buying we've seen in the last year. The temptation to buy a firearm, with the plan of adding parts to it over time often ends in remorse, but with this firearm, such is not the case.

If the CZ Scorpion had to go through growing pains, it turned out for the better. When aftermarket parts makers recognized the sturdy foundation, it sent the PCC on a trajectory of sustained support with a growing list of options. Whether to turn it into a competition gun with oversized controls, or if looking to outfit it for a night-vision capable backpack companion, the CZ Scorpion is going to be around for a while, and for the better.