Bakelite is something we think of as vintage now, but at one point was the cutting edge of materials science. Over the years it's been used in everything from household appliances to engines and, of course, gun parts. Early AR furniture was formed from Bakelite and the same was true of the AK. Clearly we all know where we like Bakelite the most: AK magazines. Those Soviet orange/red magazines that look like they're made from both wood and plastic at the same time tickle our fancy. They're like the future written from the past, and in many ways that's exactly what they are.

Of course, the combination of these aesthetics plus being scarce in the United States means high prices. But even if you have a pile of them, they're best relegated for occasional use or photos as materials science has increased tremendously over the last century.

If you want the distinctive look of Bakelite but want modern magazines, you're going to turn to Fakelite. Fakelite is simply the look of Bakelite without actually being Bakelite. Over the years we've seen many attempts that have at least a passing resemblance to Bakelite, but the very best was Hydrodipped. After many trials over the years, we're confident in saying that we're going to share the most realistic Fakelite recipe there is. We'll include some lessons learned along the way. 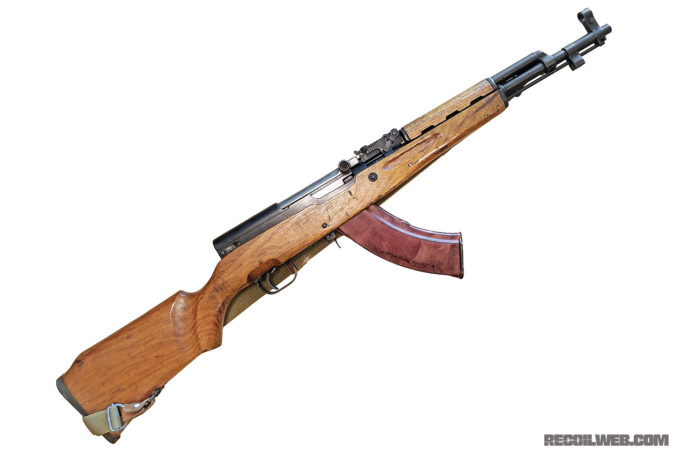 One of the major mistakes we see with other recipes is people starting out with a base that's simply too orange. While there is a ton of variation of genuine Bakelite colors, being too far on the orange or red end of the color scale will lead to cartoonish results. Rustoleum Warm Caramel is the perfect base. Note in upcoming photos that it's roughly the same color as the cardboard with just a touch of orange.

We first decided to experiment with a Tapco AK magazine, as nothing of value would be lost no matter how badly we mangled the process. As we refined this technique, other magazines and items were introduced, which is why items being coated may change from step-to-step as you follow along. The quality level of any coating you're applying depends on the base used. The best part about this Fakelite recipe is that it doesn't have to be absolutely perfect (our first attempt was on a magazine that had been painted before); however, if you want the best finish possible, first sandblast your parts or scuff up with superfine sandpaper. This will allow the base coat to adhere best. Use a degreaser or scrub with Dawn (perform 2x) to remove any oils. TIPS: Always spray in a place with good ventilation, and the warmer the better. Shake your can for at least 30 seconds before application. Apply in misting layers instead of a single thick one to avoid running Once the magazine is painted and dry, it's time to get crafty. Shake up your Minwax to mix, and break out your brushes. A little bit of Minwax goes a long way, so I like to use the lid first. I apply a small amount of Minwax stain with the 1/2-inch brush and spread it around. Use the 1-inch brush to dry brush the stain around. The thick, rough bristles will add grain to the Fakelite and keep it realistic. The working time of the stain is long, so a rag nearby to wipe up excess is very handy. Some people use much smaller brushes, and it makes the grain look unrealistic. Use a hair dryer or heat gun to help set the initial stain if you want to apply an additional layer. A genuine Bakelite nearby will help. TIPS: Regularly blot the stain from the brush so it isn't applied too thick. After your first swipe, the rest of the time is spent spreading the stain. Smoother items are easier to show the grain and be successful Fakelite items.

After the stain is dry, finish up with the matte clear coat. Even though regular Bakelite has a shine, the matte coat just brings the reflections down to a manageable, realistic level.

Ultimately you'll end up with some mind-bending things like these: For Rifle Magazines, Accessories, and DIY