There are plenty of museums that are truly off the beaten path, but the Heartland Museum of Military Vehicles (HMMV) in Lexington, Nebraska, isn't exactly one of those — at least not if you're driving on I-80 through America's heartland. While not perhaps as well known as Fort Bennett or West Point, this museum is absolutely worth the trek for anyone with an interest in military vehicles, anti-tank weapons, or just happens to be a fan of M*A*S*H*. The Heartland Museum of Military Vehicles is home to one of the largest collections of Jeeps anywhere in the world.

Run by a nonprofit organization, staffed by volunteers, and funded entirely by donations and grants, the HMMV isn't the largest military history museum in the country, nor does it have the most extensive collection of military vehicles. However, this free-to-visit museum, which is open year-round (except for Christmas and New Year's Day) is home to around 100 vehicles that date from the first half of the 20th century to the modern day. Unlike many other history museums where the old vehicles are essentially props that need to be towed out of the way, the goal of HMMV is to restore each vehicle to working order. One of the few remaining World War I-era Mack Trucks in the world is at the HMMV. Introduced in 1916, it was used by both the British and American military.

Currently the museum's collection ranges from tanks and half-tracks to a full-size helicopter. HMMV is also home to one of the largest collections of military ambulances in the world, and has jeeps from every branch of the service.

“We currently have vehicles and other military equipment from the First World War to the modern day,” said Gary Gifford, the director of the Heartland Museum of Military Vehicles. During World War II the U.S. Army drafted the Chevy pickup for action. This example has been restored to its former glory complete with wartime olive drab paint.

While HMMV may be the envy of many a military vehicle collector, it actually has rather humble beginnings that go back 30 years. The museum was founded by Lexington sons Chris Larsen, Dave Smith, Terry Lauby, and Al Martin. Armed with only a determination to preserve historic vehicles, the four were collectors who often let local veterans ride in the annual Veterans' Day celebrations. The response from veterans and parade goers inspired the four to comb Central Nebraska to find other vintage vehicles that could be restored — and soon it was more than four personal collections, it was worthy of a museum. From 1959-1962 American Motors built the M422 “Mighty Mite” — a lightweight 1/4-ton 4×4 for the United States Marine Corp. It was built with an aluminum body so that it could be easily airlifted anywhere the grunts needed to go.

In 1991 the four found a permanent site, ideally situated off exit 237 of Interstate 80, and by 1998 a 16,000-square-foot facility was constructed to help preserve the vehicles and protect them from the harsh Nebraska winters. The location remains ideal, as the sight of a World War II vintage Sherman tank, a Chrysler M-60 main battle tank, and an FMC XM-2 Bradley Fighting Vehicle are hard to miss from the highway.

The core of museum's collection is built around pieces found within a 150-mile radius of Lexington. These efforts to preserve the history struck a resonant chord in what could be considered one of the epicenters of surplus vehicles because many of the old jeeps, trucks, and yes, even tanks, were repurposed for use by farmers in the late 1940s and early 1950s when tractors were in short supply. 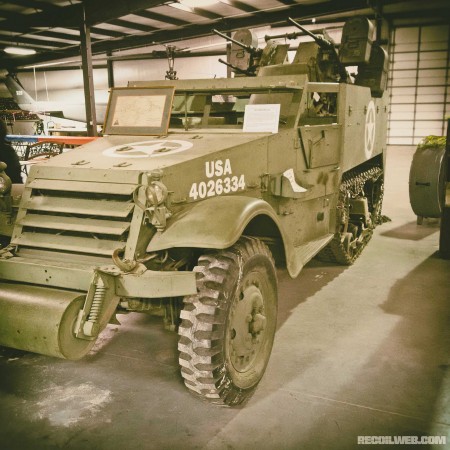 Officially known as the Carrier Personnel Half-Track (or M3 Half Track), this go-anywhere vehicle was introduced at the tail end of World War II.

When the farms grew and commercial vehicles became available, those old military workhorses were retired, parked in barns, or used as windbreaks and simply left to rust away. The four founders managed to save many vehicles before the elements transformed them into irretrievable elements of the Nebraskan landscape.

Originally, the museum focused on World War II-era vehicles. But, as the collection grew it expanded to cover a greater range of military vehicle history — not just those with wheels and tracks. While the museum added a Bradley Fighting Vehicle, donated by the U.S. Army, it also has not one, but two, M-60 tanks in its collection. Recent additions include two UH-1 “Huey” Helicopters. Named after General Omar Bradley, the Bradley Fighting Vehicle was introduced in 1981 and has seen service around the world. This example is painted to resemble those that were used in action in Iraq and Afghanistan.

“One of the two helicopters was a gunship that was used in Vietnam,” said Gifford. “It was shot down in the war, but restored to working order. We're proud to have it. The other was a medevac helicopter that was used in the Gulf War.”

A partnership with the Commemorative Air Force has allowed a restored 1942 twin-engine Beechcraft C-45 to fly on museum “missions,” while the group also brings other vintage aircraft to Heartland events. Many of the donated vehicles retain their pet names that were given by farmers and veterans — proving these are vehicles with a heart. The museum is also home to what can be described as truly a one-of-a-kind project — a fullsize replica of a Mobile Army Surgical Hospital (MASH), as popularized by the movie and TV series, M*A*S*H. It features authentic U.S. Army surgical tents and equipment.

“It is an ongoing project,” added Gifford. “We have people come in and see it and often get donations to make it better. We are always adding those things that should be there.” While the focus of HMMV is about the vehicles — and does include such unique vehicles as a German Volkswagen Kubelwagen and a Schwimmwagen (floating car), it also offers numerous displays that honor the American G.I. Part of the museum's fine collection of American small arms of the 19th and 20th centuries, including a Civil War Springfield rifle (top), a Thompson SMG, a Spanish-American War Krag-Jorgensen rifle, two versions of the Springfield 1903 bolt action rifle, an M1 Carbiane and M1 Garand, Vietnam-era M14, and the infamous M16.

The museum also isn't just about vehicles, it includes a small collection of infantry weapons and, more importantly, an impressive display of anti-tank weapons and ordnance including land mines.

“That collection is always growing, as one of our guys deals in that sort of thing so he's always finding great additions for the museum,” said Gifford. The small arms range from World War I rifles to more modern military black guns, but also included are several bazookas and similar anti-tank weapons. “We have some impressive tank killers,” said Gifford. That would only be fitting for such an impressive tank and vehicle museum. While the museum has a fine collection of vehicles, it also has a collection of small arms that are meant to take out tanks and other armored vehicles, including variations of the bazooka, an aerial bomb, anti-tank rockets, and, of course, mines! The Heartland Museum of Military Vehicles continually improves its tribute to the TV show M*A*S*H while honoring those who served in such units during the Korean War.