There’s no doubt that the AR-15 platform has been a breeding ground for firearms innovation for well over a decade now. We’ve covered plenty of the latest and greatest in these pages. We love the newest, bestest gadgets as much as the rest of you, but it never hurts to take a look back and realize that “old” does not necessarily equal “obsolete.”

Throughout the year, we receive press releases at an amazing cyclic rate from all kinds of manufacturers. One of the less flashy, but more intriguing, releases we got this past year was a notice that MKS Supply, through their partnership with Inland Manufacturing, would begin selling newly manufactured M1 Carbines in several configurations. They offered us a test sample, and we jumped at the chance to see (and shoot) what was old, made new again. The United States Carbine, Cal .30, M1 sprang from an Army Ordnance Board competition for a lightweight, semiautomatic firearm to be used by soldiers who didn’t require full-sized battle rifles. This included everyone from cooks and vehicle crews to officers and airborne troopers. The original prototype was submitted by Winchester — built in just 13 days — and was a hit with military observers at the competition. (See issue 21 for a photo of the prototype at the Cody Firearms Museum.) It weighed in at a spritely 5.2 pounds. In comparison, the portly M1 Garand could tip the scales anywhere from 9.5 to 11.5 pounds, depending on the variant, and the stubby M1 Thompson submachine gun felt positively anvil-like at over 10 pounds empty. So the M1 Carbine provided a quick-pointing, quick-shooting option to troops who either didn’t need the additional firepower or required speed and stealth instead of brute force. It was also far cheaper to produce, with an initial unit cost of $45 (in 1941 dollars) compared to an M1 Garand at $85 and the Thompson at $225. It was released in a number of variants, including the M1A1, which included a folding stock for airborne units; the M2 Carbine in full-auto; and the M3, which was an M2 equipped with one of the first infrared scopes ever fielded in military service. If you ever wondered why the M4 carbine was so named, it was simply the next in line after the previous .30-caliber guns. The M1 saw combat during World War II with line troops in both the European and Pacific theaters. It was also utilized in limited numbers by the OSS, British SOE, and SAS. It was military issue as far forward as Vietnam and has been spotted in a number of places since then. At one point it was issued to Corrections Officers of the Federal Bureau of Prisons and, to this day, sees limited use by the Israeli and Philippine Defense Forces.

Inland is not the first company to reproduce the M1. Auto Ordnance and Universal both make copies of the military classic. It should be noted that Inland Manufacturing is a private company with no relation to the original Inland Division of General Motors, one of the military contractors who produced wartime M1 Carbines. The new company does, however, base their reproductions directly off the Inland GM designs, using components sourced entirely from the USA. ’Merica!

So much for the history lesson. We’d like you to understand not just what the M1 was, but what it is and what it can do for you. Ultra-light ARs are all the rage right now, with people spending thousands of dollars to shave every quarter-ounce off their beloved black rifles. Even with a loaded 15-round magazine and a sling, the original M1 Carbine still comes in under 6 pounds. While the M1 is typically found with 15-round magazines, 30 rounders have been available since nearly its inception.

Modularity is one of the biggest hurdles facing any weapon trying to catch up on 75 years of firearms advancement. Optics are all but required, and the Picatinny rail is where the bar has been set. There’s a small clique of companies who make scout-style pic rails for the M1 platform. The name we recognized most easily was UltiMAK — known primarily for their AK gas-tube rail. We went right to the source and asked UltiMAK if they would assist us in upgrading our test gun. The gentleman we spoke to on the phone told us he’d never heard of RECOIL — which we found a little surprising, considering our circulation numbers. We tried to offer proof of our credentials and were told flat out that a test sample was “just not going to happen.”

Look at photos of WWII munitions factories and you’ll sometimes see the words, ‘War Finish” stenciled on lathes and milling machines. This bolt appears to have been made on one of them.

God bless the free market. After some more research we came upon Amega Ranges, based out of Texas and Arizona, who also make an M1 Carbine scout rail. They were a pleasure to work with, and we found their rail to be well thought out. It replaces the top half of the M1 Carbine’s two-piece wooden forearm with an aluminum rail unit. In addition to a top rail, the Amega Ranges unit is drilled and tapped for screw-in rail sections at the 11 and 1 o’clock positions as well. They make 2-inch and 4-inch Picatinny sections. There’s also a tactical sling mount that can be used to mount a traditional web sling — or any sling with hooks — without the need for a rail section. This gives you a degree of modularity that is, frankly, pretty awesome on a rifle that predates Elvis.

In our opinion, any practical rifle requires three add-ons: a quality optic, a light, and a sling. For the first, we used a Hi-Lux Micro Max B-Dot. This is a 2 MOA red dot rated for 50,000 hours of battery life, with grunt-proof big button controls and a spare battery already on board. It sits low on the Amega rail and provides a clear, crisp sight picture that made 50-yard shots ridiculously easy. The flashlight is a 200-lumen Inforce WML. This version has both constant on and momentary-only options, as well as a strobe that can be deactivated. They make a 500-lumen version, but since the M1 is primarily a close-in weapon, we chose a slightly dimmer light that won’t fry eggs — or your retinas. A decent RDS allows the user to exploit the .30 Carbine round out to its ballistic limits. A magnified optic would be out of place on a 200-yard carbine.

This setup is streamlined, with all the essentials and zero fat. It’s an ideal trunk or bedside gun that’s highly controllable and soft shooting. While the M1 has been eclipsed by the AR as a patrol carbine, the Amega Ranges rail and accompanying upgrades make it fully relevant for close-in defensive work. The M1 is also a little more image-conscious than an evil black rifle. We know this shouldn’t matter, but unfortunately it’s a real consideration in parts of the country we like to call “occupied territory.”

Unfortunately, we found the fit and finish on this gun to be somewhat lacking. The action is in desperate need of de-burring. Hand-cycling the bolt sounds like driving on loose rocks, even with a healthy amount of lubrication. Our test gun was rough enough that if we slowly cycled the bolt, it would hang half-open and need to be slapped shut. Dry cycling the action 20 or 30 times also scuffed the finish on all of the moving action parts before we ever fired a shot. Inserting and removing the magazine exposed bare metal on all of the mag’s contact points. The stock is beautifully finished with a rich chestnut-colored stain, but running a damp cloth over the wood left a reddish-brown film on the rag.

The .30 Carbine kicks less than a pistol-caliber AR, and our accessory configuration added nothing significant in terms of weight or balance shift. The M1 is highly enjoyable to shoot and quick in the hands. Unfortunately, our test gun was a little choosy about ammo. We shot a hodge-podge of different rounds through it with varying degrees of success. Armscor brass-case FMJ ran well, if not perfectly. We also ran Hornady Steel Match, which gave nothing but problems for us. These rounds would often feed partway or nose dive against the feed ramp. Sling-shotting the bolt sent the round into battery every time, and ignition/ejection was fine. We’re not sure if this was an ammo problem or rough machining in the action, but we also noticed significant front-to-rear wobble in the magazine — even when properly seated — which may have contributed to the nose dives. It should be noted that this same type of malfunction was encountered sporadically with all types of ammunition we tested, but the Hornady Steel Match had a disproportionately high failure rate. In addition to the FMJ, we were fortunate to get our hands on some of Hornady’s 110-grain Critical Duty load. This uses a red polymer flex tip just like their Critical Defense/Duty lines and provides better expansion than a JSP. It fed with the same success rate as the Armscor. 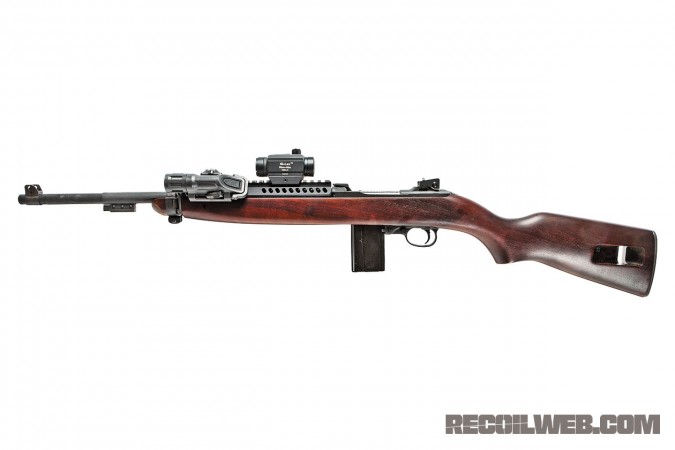 So you’re not going to be using a single point sling with this puppy. The old-school two-point version works just fine, however.

The shooter-friendly recoil impulse of this cartridge lends it to excellent accuracy. We were printing clover leaves off-hand at 10 yards. Then we moved back to 25 and did the same thing. We even managed to ding an old No. 10 paint can at about 110 yards standing, supported off shooting sticks. Accuracy is plenty acceptable for a weapon of this type. Two other shooters who had never used this platform before replicated these results.

Controls follow the original design closely. The safety is a cross-bolt button forward of the trigger guard, with the mag release just in front of it. We could reach both with our trigger finger without breaking master grip. The charging handle is a simple hook that protrudes from the right side of the bolt carrier, and there’s no last round hold-open. In this respect, you’d do best to run the M1 like you would an AK. The single stage trigger had no take-up and only a touch of over-travel, measured at about 6.5 pounds on our Lyman gauge.

Due to the excessive number of stoppages encountered, we cannot, in good conscience, endorse the current Inland reproduction as anything more than a range toy. However, this was an excellent proof-of-concept for us. The M1 Carbine is light, fast, and accurate. A reliable M1, teamed with the accessories mentioned above, would give anybody a formidable defensive weapon not to be trifled with. We’d highly recommend this setup for shooters who are smaller framed, recoil sensitive, or just want something compact, nimble, and accurate. The Inland models retail for right around $1,000, with three models available — the standard 1945 model; the 1944 model, which comes with a 10-round mag and no bayonet lug for ban-state compliance*; and the M1A1 paratrooper, with original style side-folding stock.

[*Author’s note: The M1 Carbine is classified, by name, as an assault rifle in the state of New Jersey. Even the “ban compliant” 1944 model is illegal in The Garden State. To our knowledge, this is the only state with such a provision against the M1, but research your local laws before you decide on your purchase.]