Ammo Shortage 2020: Is COVID-19 Creating a Run On Ammunition? As if shortages of toilet paper and hand sanitizer were not enough; shooters are reporting an ammo shortage amid the 2020 COVID-19 outbreak.

Here We Go With Another Ammo Shortage

The response to the virus seems to be responsible for the next nationwide ammo shortage and a run on firearms.

*Update: As of 5/18 these online retailers still have ammunition available: The ever prescient Alexander Crown, recently penned an article for RECOIL, When the Brass Dries Up and lays out some of the more recent ammunition shortages and how to cope with them. It seems very timely amid reports we have been hearing since early February.

We've seen subtle signs of a panic buying here and there the past few weeks but it looks like the lid is about to blow off.

A Looming Ammunition Shortage, Firearms Too

A reader from Arizona, Brent Stuart, tried to purchase two cases of pistol primers last week from Sportsman’s Warehouse in Phoenix, AZ, this afternoon and was told he could only purchase one case.

The clerk at the counter told him there was a new corporate policy limiting the amounts of firearms, ammunition and reloading components purchased in a single day.

According to the employee, he had received a copy of a memo from corporate headquarters that morning limiting firearm, reloading components and ammunition purchases temporarily.

With increased demand and limited supply on select items, Sportsman’s Warehouse has implemented the following purchase limits to ensure our product reaches as many of our customers as possible.

We tried contacting Sportsman’s directly Friday 3/13 and our call was placed on hold for more than 30 minutes. So, we took the liberty of calling a few of the local stores in Reno and Carson City, Nevada.

Both stores reported no limits on anything, but said ammunition was flying off the shelves. One employee reported a 75% decrease in stock on the shelves within the two hours he had been there. The other stated that it would not surprise him if such a policy would be put into place soon as a measure to stop the ammo shortage due to COVID-19.

Online ammunition retailer, Ammo.com, reports a significant increase in sales since February 23, 2020. The company believes that this surge corresponds with the public concern regarding the COVID-19 virus.

Alex Horsman, the marketing manager at Ammo.com, said of the surge, “We know certain things impact ammo sales, mostly political events or economic instability when people feel their rights may end up infringed, but this is our first experience with a virus leading to such a boost in sales.” Horsman continued, “But it makes sense. A lot of our customers like to be prepared. And for many of them, it's not just facemasks and Thera-Flu. It's knowing that no matter what happens, they can keep themselves and their families safe.” We queried another big box store about the shortage of ammo, Cabela’s and Bass Pro-Shops, who reported that ammunition is selling at a record pace.

Cabela's had no plans to limit purchases at this time.

Firearm sales numbers are always difficult to nail down definitively, but at least in Nevada, calls into the state’s background check system have been taking in excess of 2 hours.

At certain times after waiting for 30 minutes or more a message tells the dealer that the queue is full and disconnects the line, causing them to call back in and having to wait again. 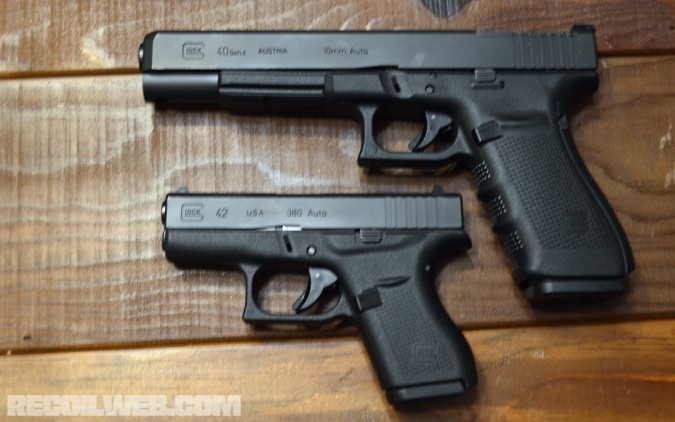 Glocks are always popular during an ammo shortage.

We've witnessed that happening while in several different gun shops and ranges over the past several weeks. It appears more people are buying firearms than usual.

Firearm and ammunition sales in California are reported to be five times above normal due to COVID-19.

A shooting range in Clovis, California, had to stop customers from buying ammunition to take home because they were running out of ammunition for the range. The Firing Line owner Jake Belemjian says people are stocking up on ammunition because of COVID-19 and the shop can't keep up with the demand.

If this were not bad enough, the NRA is reporting that today, an ordinance has passed in Champaign, IL, to empower the mayor to “[o]rder the discontinuance of selling, distributing, dispensing or giving away of … firearms or ammunition of any character whatsoever.”

Apparently, politicians want to fan fears of limiting access to firearms and ammunition, leading more people into panic and creating more shortfalls in supply. We have speculated that the State of Nevada's background check system's extensive hold times may be the work of an anti-gun governor ordering staff cuts or allocating personnel elsewhere, but it seems coincidental with the timing of COVID-19.

The fact that it is an election year with an outspoken anti-gun candidate on the presidential ticket could add fuel to this fire and spur along a potential ammo shortage even without COVID-19, but probably not this early in the cycle.

Is This a Nationwide Shortage?

Dealers and distributors who have maintained good inventory should be able to continue to service customers. Most shooters who've gone through these shortages before have learned from the past and planned accordingly. 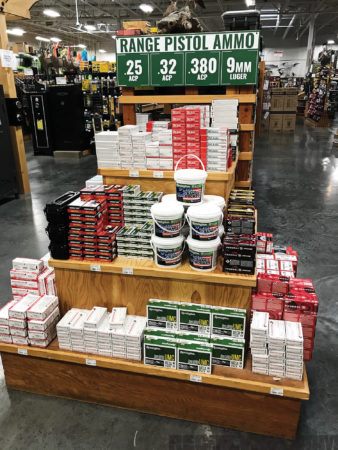 A plinking ammo endcap display at a Sportsman’s Warehouse.

We aren't yet seeing a firearm shortage due to COVID-19 in our neighborhood, but there may be an extended ammunition shortage on the way if it is not here already.

In 2014, it was 22 LR, according to Ammo.com that caliber is moving a lot, but the surprise we found topping their list of most in-demand ammunition for the past few weeks was 40 S&W.

We would never tell anyone to not buy ammunition, not even during an ammo shortage. Just don't act all panicky and act like the folks who are building toilet paper forts in their garages.

Speaking of which, Franklin Armory has a smoking deal on Government issue “MRE” toilet paper and it comes with a free BFS-III binary trigger. Of course, that means that you will probably need to buy more ammunition.

One response to “Ammo Shortage 2020: Is COVID-19 Creating a Run On Ammunition?”