Home » Featured » Legacy Night Vision: The M3 Carbine That Sees in the Dark

Legacy Night Vision: The M3 Carbine That Sees in the Dark The ability to fight effectively at night has always given American and other coalition warfighters an incredible edge. Its significance as a force multiplier cannot be overstated. While now one can literally saunter down to Walmart and purchase some rudimentary Night Vision Device (NVD, to use one acronym) it hasn't always been the case. Just like early computers, televisions, and cellphones, the first infrared systems were anything but sexy and compact. Recently, current manufacturer of high end Night Vision (among other products) B.E. Meyers shared some photos and insights via Facebook about America's first fielded NOD (Night Optical Device, to use another) equipped small arm. We thought you'd enjoy it as much as we did.

———
We here at BE Meyers specialize in electro-optics for military applications, and we maintain an extensive library of legacy weapon systems. Today, we'd like to introduce you to one of the America's first weapon systems utilizing electro-optics, the M3 Carbine.

Based on the 30 caliber M1 carbine, the M3 carbine is an improved version of the active night vision variant carbine which first saw action in the Pacific Theater as a M2. The early model M2 had an effective range of about 70 yards, and despite the limited range and bulk, was able to account for an outsized number of Japanese casualties during the battle for Okinawa. Advancements in technology increased the effective range of the system to about 125 yards. M3 Carbine pictured with transformer which would convert a 6 volt battery output to 20,000 volts

Like almost all early night vision, this system is an “active” night vision device with a large, IR illuminator being one of the major components. The M3 was a complete system, requiring a large, bulky lead acid battery and power pack in order to function. This complete system weighs 34 pounds! In comparison, Gen 3 night vision devices are so sensitive as being capable of using ambient illumination from stars and the moon, and so lightweight and small as to be capable of being helmet mounted. Today, the American military “owns the night” with superior night vision capabilities and logistics: no other country is capable of fielding as many, and as high quality night vision devices and lasers, and significant effort goes into maintaining this technological advantage with strict controls on restricted technology. We are all students of history though, and it is good to have a good understanding of how electro-optics have affected tactics and the battlefield in the past. 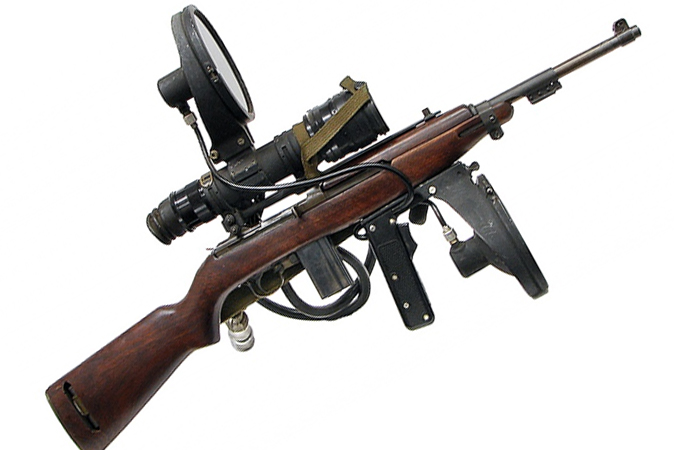