If you call yourself a gun enthusiast and you don’t know who John Moses Browning was, you need to find a safe space and decide how you should actually self-identify yourself. John Browning’s most famous creation, at least in the United States, is the ubiquitous Model 1911. It’s everywhere, and probably within reach of well more than a few people reading this article. The 1911’s active service life in military organizations is pretty much over. However, another of Browning’s continues to serve — the Model 1919 Machine Gun.

The Model 1919 was essentially an air-cooled Model 1917. It was chambered in the powerful and effective .30-06 round, modernized following extensive ballistic testing in the post-World War I years. Unlike most ground-mounted WWI-era machine guns, the 1919 was air cooled, had a heavier barrel, and was easier to maintain under combat conditions than its water-cooled cousins.

It didn’t require all the accouterments of a water-cooled gun, such as a bulky water jacket, water, and a condensing can. The 1919 was originally fed by a cloth belt and designed for vehicles—or a very solid (and heavy) tripod. It had a reasonable rate of fire at 500 rounds per minute on average. By WWII, it was the standard U.S. light machine gun, serving alongside Browning’s M1917 and the legendary Browning M2 HMG.

Like most of Browning’s designs, the 1919 was very reliable for the day and age in which it was produced (insert Glock joke here). It was also apparent early on that the 1919 was versatile. By the end of WWII, it was mounted on tanks, in aircraft, and found in various calibers, including .303 British. It served in virtually every Allied army, and if you dig hard enough, you can even find pictures of enemy troops using captured 1919s. It was very effective against personnel, and when loaded with armor-piercing ammunition, it was also effective against thin-skinned armored vehicles. 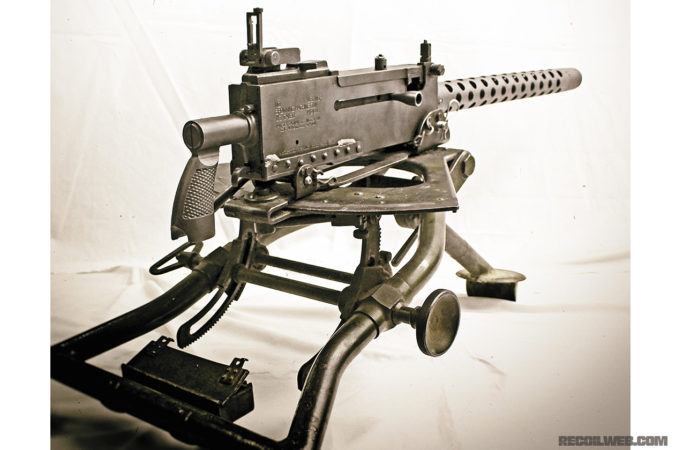 The view from the user’s end reveals the 1919’s WWI era design heritage.

In the air, the modified M1919 was called the ANM2. This variant was specifically modified for aerial warfare, boasting a blistering rate of fire at 1,200-plus rpm. The improvements in aircraft technology and design during the period meant rifle-caliber machine guns were only effective when their throw weight could be boosted by increased rates of fire, and by mounting anywhere from two to six of the guns. Feeding them with the most destructive type of ammunition available, generally one form or another of API-T (Armor Piercing Incendiary Tracer), helped.

While the ANM2 served valiantly, it was not as effective as its Browning M2 brethren as an anti-aircraft machine gun. In the decade before WWII, fighter aircraft were increasingly fitted with heavier machine guns, generally .50 BMG Browning variants in the U.S., or 20mm (or larger) cannons in Europe. It wasn’t the fault of the ANM2 that it was less effective against aircraft; it was the fault of the ordnance officers who decided to mount it in aircraft in the first place.

In the infantry role, the M1919 was successful within its limitations. Keep in mind the M1919 was designed in an era when the belt-fed machine gun was essentially a static weapon. The exception to this trend at the time was the MG08/15, which was an intentional departure designed specifically to make the infantry machine gun more portable and useful. By WWII, the MG08/15 concept (a highly mobile, portable general-purpose machine gun [GPMG]) evolved into the MG34 and eventually the MG42 in German service. This is where the M1919’s combat failings became apparent.

Although accurate, reliable, and possessing a good sustainable rate of fire, it was clumsy and awkward on a mobile battlefield compared to the MG34 and MG42. The tripod was large and unwieldy, and it was not always easy to emplace. U.S. troops frequently had to improvise with the 1919, more or less propping it up against or on the WWII equivalent of “a rock or something” when the tripod simply wouldn’t work under the conditions. The 1919 has definitely outlasted the Chevette and the Nova. Good job, GM!

As a result, the M1919A6 was developed. This variant added a buttstock and a bipod to the M1919 in attempt to turn it into a light machinegun, more like the MG34 or MG42. However, it was still about a pound heavier than the standard M1919 without the tripod, weighing in at 32 pounds. It was an improvised solution akin to adding a bipod and a buttstock to a boulder. It was still awkward; although it was a bit less unwieldy and more stable, it appeared far too late in the war to have much of an impact. The grip and trigger seem awkward but are very easy to manipulate.

Until the M60 (a less-than-fantastic GPMG, but a product of the “made here” school of ordnance development) was made widely available during the Vietnam War, the U.S. infantry were saddled with the M1919 and M1919A6 combination. The 1919 is always, always hungry. Feed it as much as possible; it’ll work off the calories.

As a vehicle-mounted machine gun, the 1919 excelled. As a matter of fact, it does such a good job it’s still in service in many places across the globe. It’s been modernized, now using disintegrating link belts instead of old-fashioned cloth belts. Most 1919s still in service were converted to 7.62 NATO, as well, to ease the strain on logistics. Notably, however, one 1919 variant, the M37 Coaxial MG, was somewhat notoriously problematic, again mostly because some people just can’t resist fixing something that works.

There have been some interesting variants of the 1919 over the years. Several ANM2s were converted into a variant called the Stinger. The Stinger was basically a scavenged aircraft-mounted gun with a bipod, carry handle, and buttstock. The extremely high rate of fire was welcomed (for the six or so guns which appear to have actually made it into combat), but the Stinger only served in limited numbers. Its primary claim to fame was being the weapon “Terrible” Tony Stein used during the combat action that earned him a Medal of Honor on Iwo Jima.

If you ever get a chance to fire a ground-mounted M1919, we highly recommend you do so. As it was originally designed, it’s accurate, reliable, and very easy to shoot. As a machine gun for a fixed position, it can easily hold its own against any gun of its era. It’s easy to manipulate, strip, and clean, and it’s very robust in its most common and most current variant, the 1919A4. However, remember it’s almost a 100-year-old design; don’t expect it to perform like a modern machine gun.