MARSOC “Raiders” (SOF Marines of the Marine Corps Special Operations Command, like the one you see above) will be continuing to use a 9mm Glock pistol as they conduct social work and deliver Freedom around the world; but now they won't be doing so provisionally. According to a recent article in the Marine Corps Times, the Raiders (you may recall their ‘motorcycle gangs of Afghanistan‘ exploits a few years back) will now be issued the Glock as a matter of course.

Both Army and Navy SOF components have been debating about going to Glock on a wide scale for years now. 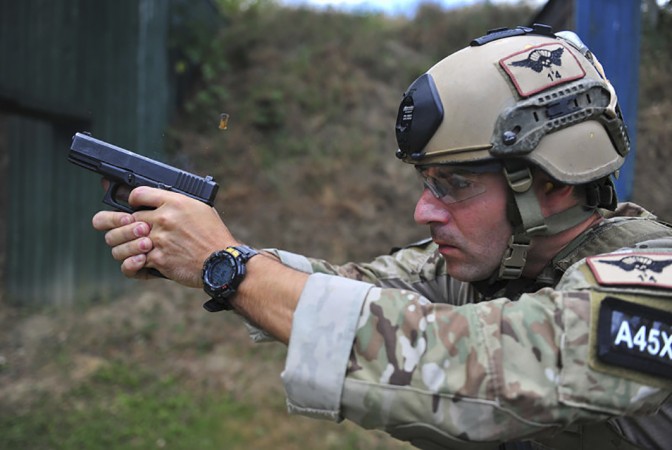 Previously, the classic .45-caliber Colt 1911 was one of three pistols that Raiders were allowed to carry, but now the 9mm Glock 19 is the only pistol that Marine special operators can take into battle, said Maj. Nick Mannweiler, a spokesman for Marine Corps Forces Special Operations Command.

“We put our money behind the 9mm round fired by an extremely well-trained marksman carrying a Glock 19,” Mannweiler told Marine Corps Times.

Since last year, MARSOC has purchased and fielded 1,654 Glock 19s because Raiders needed a reliable secondary weapon “that could be used for both a concealed carry profile and a low-visibility profile,” and having one approved pistol for all special operators saves money, he said. The article goes on to explain some of what the Marines (and other branches) have been debating.

The arguments boil down to this: The .45-caliber round is the bigger bullet, so it has the “knock down power” to neutralize any adversary with one shot; while pistols that fire 9mm rounds are generally more accurate and can carry more bullets. Where a bullet hits the human body is also a major factor on whether it inflicts a mortal wound. Even though the .45-caliber cartridge has more propellant, the 9mm round usually has more penetrating power because the smaller round faces less air resistance on its nose as it files through the air, said Neil Clapperton, a firearms and forensic expert with the Rhode Island State Crime Laboratory.

Read the remainder of the story right here.