Sometimes unexpected is a Good Thing.

Last January's SHOT Show was filled with the typical announcements of the usual items we regularly expect. New weapons, new versions of weapons, new accessories, and new optics. What none of us expected to see were new magnifiers from Aimpoint, especially three new magnifiers that included the announcement of a commercial and a military line. They quietly slipped a new mount into the mix as well, showing the aftermarket mount world it might need to step up its game.

The two 3x models, along with the 6x version were well received by shooters on range day, but none of the glass used was actually in then production.

The question should always be asked — will it live up to the hype? Now we've got the first of the new Aimpoint magnifiers and mounts in our hot little hands.

Everyone at RECOIL likes new things, especially new firearm related things. However, we've also all seen also seen items released before they should've been, so we took a few extra days before publishing our first look at the Aimpoint 3X-C magnifier and the Twist Mount. Our gear arrived in non-production packaging, so any of you “unboxing” freaks out there are going to be disappointed. That hardly seemed to matter though, as we threw the boxes to the side immediately and put the 3X-C up to our eye to check it out.

Our first thought: the glass is clean. Super clean. No tint, or hue showing, and no fisheye or other odd spots visible when looking through the glass. While we wouldn't expect anything immediate to jump out as a problem from a major player like Aimpoint, the possibility is always there. Wev'e seen windshields with warp or odd spots, and vehicle manufacturers have those down to a science. There's no reason to think firearm-related companies couldn't suffer similar issues. Any glass has the possibility of optical error, but we found nothing wrong.

The body of the 3X-C is anodized nice and even, with the majority of it encased in a thick rubbery material. With the 3X-C in place in the mount, there is almost no aluminum body showing with the exception being around the front and rear glass. The Aimpoint 3X-C fits snugly in the Twist Mount body, and a single bolt is turned to secure the magnifier in place. The mount mates well with the 3X-C, and there is no need to heavily torque it down. Obviously a witness mark or thread locker would be an asset to make sure your investment doesn't get lost in the woods, but that can be said for any parts on your weapon. The Twist Mount is anodized aluminum, and secures to the rail by means of a slotted hexnut. The mount can be reversed for left or right handed preference, which should make roughly 13% of the shooters out there happier than they otherwise would be.

Use of the Twist Mount is simplistic. To go from a magnified to non-magnified shooting view, twist the optic from the 12 o'clock to 3 o'clock position. There are no buttons to push, or cams to release, as spring pressure holds the magnifier in place. To remove the 3X-C, press the latch (visible in the pics) and twist the magnifier towards the front of the weapon. Removal is easy and fast, and highly unlikely to be done by accident. Reattaching the magnifier is done by reversing the process, and again, is not difficult at all. 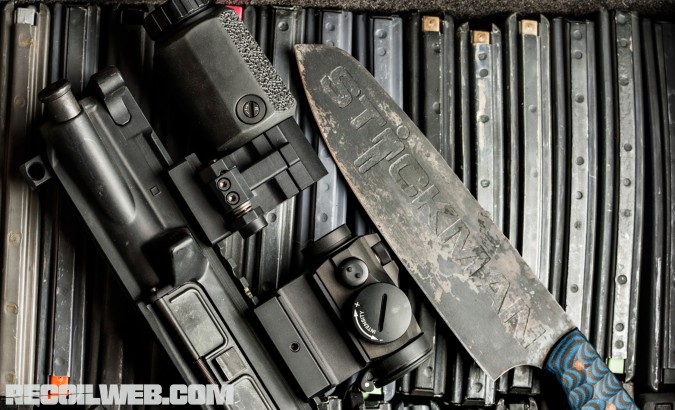 Aimpoint tells us this 3X-C is built to work best with its newest T2 and H2 optics. This ends up being a nice way of saying the T2/ H2 are a higher optical grade of glass than the other Aimpoint models. That is pretty cool, but what if you're the poor slob withs a couple T1s, or Comp M4s? What about the older optics like the Comp M2 or M3? Rest easy. We slapped a bunch of different T1s, Comp M4 and M4s, as well as PRO models up with the 3X-C magnifier, and found them to all work nicely.

Do we think people will see a difference? Possibly, but it would more than likely be eyesight dependent as well as based on the light you are viewing in your scene. In bright daylight, probably not much of a difference, but in low light, smoke, haze or other visual obstructions combined with eye sight issues, we think the variables would shift to become more noticeable. In any of the conditions, and with any of the Aimpoint optic and 3X-C combinations we used, they were all highly functional. Adjustments to the Aimpoint 3X-C magnifier are easy, and can be done with shell casing, small screwdriver, Multitasker/ multitool, or similar device. Clockwise rotation of the top adjustment screw moves the dot up, and the side screw adjusts in a similar manner to move the dot to the right. The adjustment method is convenient as most of us do not place our heads in exactly the same shooting position as everyone else. It's probably worth remind you, you're not adjusting your sights as you adjust the magnifier. For anyone wearing glasses, you will be happy to know the 3X-C has a variable (-2 to +2) dioptric setting, so you are able to adjust for your own eyesight. While the military versions will have a greater degree of adjustment, shooters can still opt to wear glasses if +/-2 isn't enough. We knew the question of using non-Aimpoint red dot sights with the Aimpoint 3X-C would come up, so we gave that a shot as well. The magnifier works well with these other red dot sights, but along with enhancing your view, it also enhances optical flaws. If you have a super cheap airsoft clone sight you probably aren't looking at buying a real Aimpoint magnifier anyway. The 3X-C isn't magic. It magnifies good or bad, and doesn't discriminate. Junk glass will not become suddenly become fantastic, clear, and 3 times closer. It will become three times closer, and three times as ugly. Pricing is another question that always comes up. In this case a quick internet search shows that Brownells is the first listing, and has a preorder price of $276 for the 3X-C. Feel free to buy it from where ever you want. Almost every optics and AR15 dealer carries Aimpoint products. Enhanced ability to visually asses a target from farther distanceuick adjustment back and forth (1x-3x)
Solid hunting, target, defensive, gamer, and LE application
Price
Minimal hue or color shift
Adjustable for eyesight
Adjustable for head placement
No need to change zero
Aimpoint durability and warranty
Simple to use

Overall recommendation? We have to give this one a checkmark in the yes column. The Aimpoint series of RDOs (Red Dot Optics) owns a substantial part of the market thanks to durability, battery life, and effectiveness in a 1X setting. The ability to see further and do more is an all around win. While not everyone needs more magnification to their Aimpoint, those that do should give this a serious look.

Check out this link for factory info, or hit up aimpoint.com.