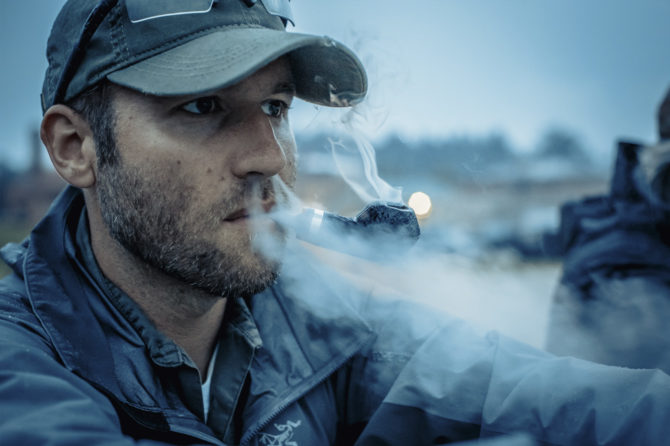 The smell of black cavendish. Maybe this gives you visions of wizened old men in overstuffed leather chairs surrounded by books and bourbon. Perhaps it’s a canoe paddle gliding through pristine water on a brisk spring morning. Or the sublime image of your grandpa enjoying a pipe as he watches the sunset off of the back deck. For me, personally, it’s always the great outdoors, and hearkens childhood memories of backpacking in the deep woods with my father.

While the popularity of cigarette smoking is on a decline thanks to a combination of taxation, popular culture, and stale smells, the same can’t be said of pipe smoking. If anything, it's seen a renaissance, with a younger generation participating in the same leisure activities as their grandparents. Pipes are for relaxation, serious contemplation, and engaging conversation.

A pipe takes a bit more time, twiddling, and care than smoking a cigar; it’s far from a dollar-store fidget spinner, but it does keep your hands busy. Also unlike cigars, because one uses loose-leaf tobacco in a pipe, the amount you imbibe at any given time is up to the user.

While some of your RECOIL staff enjoy a pipe, as enthusiasts we aren’t authorities. So authorities we found. Pipes & Pleasures is a tobacco shop in Columbus, Ohio, that’s been in business since 1977. Not only do they deal extensively with fine pipes, tobaccos, and cigars — they’re also the home base for S&R Pipes, an internationally regarded brand. The shop is owned and operated by Iris Young, and though she’s retired now, original founder Roswitha Anderson still hand-makes S&R Briar pipes in her workshop. If there were a single best design for a pipe, then we’d only have one kind of pipe to choose from. Just like automobiles and pistols, some are undoubtedly better than others. But, there’s a whole lot of personal taste at play. Pipes have many price points, but if you want the best materials and actual artistry, you’re going to pay for it. One way to save a bit of money and still obtain a high level of quality is to shop estate pipes. This may well be a fancy way of saying “used,” but if well maintained, the owner can end up with a beautiful pipe that smokes well for less money. Winning all around.
If you’re just dipping toes, start out with something on the more affordable end of the spectrum and move up from there. Pipes are formed from nearly any material, with obvious pros and cons. Often, do-it-yourself kits employ pear or apple wood because as species, they lend themselves to hand carving, but can be burned through quickly. We’ve likely all seen corncob pipes that are cheap and disposable. Clay pipes are made by many a stoner art student, and assorted glass pipes can be found in both specialty shops and seedy back alleys. Glass is not typically used for pipe tobacco, instead being relegated to marijuana, crack, and meth — that is to say, not within the purview of this buyer’s guide.
The two main materials that you’re going to see are briar and meerschaum.

Briarwood is actually the root of the Erica Arborea, a flowering plant that only grows around North Africa and the Mediterranean. It’s extremely hard and heat resistant when fully cured, making for an excellent pipe material. Additionally, briar has little taste so it doesn’t change the flavor profile of a tobacco. The exterior cuts of briar are the most desirable, and usually are only used by higher-end artisans. The less expensive interior pieces are more commonly seen with mass-produced and machine constructed pipes. Today, briar is the gold standard to which all others are compared.

Sometimes resembling plastic, meerschaum is the clay-like mineral sepiolite. Chiefly found in Turkey, meerschaum is entirely taste-neutral, and its porous nature leads to a cooler smoke. As you may have guessed, meerschaum is a German word for “sea foam,” and sometimes can be found actually floating in the Black Sea. One major advantage of a meerschaum over a briar or other wooden pipe is that no break-in period is required (see below). Like the pipe bodies themselves, the stems of pipes can be made from a variety of materials such as Lucite, acrylic, vulcanized rubber, bone, antler, and even Baltic Amber or ivory.

The button of a pipe is the ridge at the end of the bit. Used for holding the pipe between the teeth or for placement inside the mouth, there are several types. Larger and taller buttons are more commonly seen for dangling, whereas a pipe with a longer stem may have something more minimalistic. Straight
A straight button doesn't have a taper, and its width is roughly the same as the stem. This is the simplest construction, but also means that cleaning is easy. A straight tip can accommodate very large bores with no constrictions if you like a lot of smoke.

Fishtail
Though the name is obvious, the advantages of a fishtail aren't necessarily immediately evident. The tapered design allows for stems with a smaller, more delicate diameter while still giving the smoker a flared button to smoke easily from the front of the mouth.

P-Lip
Specific to Peterson pipes, a P-Lip sports an asymmetrical button height, and the smoke hole itself is on top so the draw goes to the top of the mouth. Smoking fast with a P-Lip can lead to tongue burn and more of the stem has to be in your mouth for a proper draw compared to other designs. Much like the .40 S&W, people either really, really love the P-Lip, or absolutely hate it. Pipe tobacco is broadly broken down into two categories: English and aromatic. Speaking in general terms, an English blend has no additives (called casings) in the tobacco whereas in an aromatic, some kind of flavoring is put into the mix. This doesn’t mean that there aren’t English blends with natural flavor profiles (think wine) or that all aromatics carry an overbearing taste.
Saying “English or Aromatic” is like saying “cars or trucks.” There are many other factors at play, such as cut, blend, curing, aging, and more. Walking into a well-stocked tobacco shop, the selection can be daunting. If you’re just starting out, we advise the use of the purveyor as a smoke sommelier. BREAKING IN THE PIPE

Cake is a protective coating of carbon deposit left over from smoking. Cake helps prevent burning out the wood and, over time, can even change your smoking experience. To build up this initial layer of cake, do the following:
Half-fill the bowl for the first six smokings. Unless you always smoke an entirely full bowl to the bottom, more cake will form at the top. Starting with half full bowls ensures the cake layer begins toward the base. A more moist tobacco will generally make breaking in a pipe easier. Be careful not to overheat the pipe during the break-in process. You’ll know you’re overheating if the pipe becomes uncomfortably hot to hold. What you’re looking for is a cake layer approximately as thick as a dime. There are many tools and accouterments available to enhance the smoking experience. If you’ve never smoked a pipe, odds are that you’ve used a pipe cleaner on stubborn gun parts before. Scrapers are used to reduce the thickness of a cake if it becomes too large, and tampers are used to pack down tobacco so it doesn’t burn too hot or too fast.
While you can use common matches, torches, or lighters to start the smoke, specific pipe lighters and inserts exist. Flames emit from the side of pipe-specific torches, making it much easier to light a pipe without contorting your hand in a bizarre angle or burning yourself. As with tobacco, there are hundreds of pipe designs. Today we’ll break down the basic shapes and benefits of each, and no doubt you’ll find endless combinations all falling somewhere in between each in the great Venn diagram of design. Cost: $295
Origin: USA
Construction: Briar
Notes: The style name is rather self-explanatory. Easy to clean and highly transportable, a small straight is often used for a shorter smoke on the go. Also popular with people who dangle a pipe from their teeth. Cost: $95
Origin: Italy
Notes: The most distinguishing feature of a Canadian is the long shank, typically with a length 1.5 times the height of the bowl. The shank profile is oval, and is always perpendicular to the bowl. The longer shank allows the smoke to cool a bit when drawn. Due to the stem design, a Canadian can be particularly hard to hold with only your teeth. Cost: $125
Origin: England
Construction: Briar
Notes: Sitter’s come in all shapes and sizes, but all share one common feature: It sits upright by itself, stem off of the deck. These are especially handy for those who like to place a pipe down during a smoking session, as no specialized ashtray or holder is required. Cost: $95
Origin: Italy
Construction: Briar
Notes: The jack of all trades, the Business Bend is probably the best choice for general use or getting started with pipes. They do well for dangling and naturally curve in the hand. Small business bend pipes are suitable for travel, and larger ones look right at home in any library (assuming you can find one to smoke in). Cost: $350
Origin: France
Construction: Calabash and Meerschaum
Notes: Large and somewhat cartoonish, the calabash pipe is the one rocked by Sherlock Holmes. Usually purchased for show, rather than smoke, the body of a real calabash pipes is formed from a calabash gourd. Traditionally the bowl itself is constructed of meerschaum inserted into the body. Smoke from a Calabash is very cool due to the extremely large cavity gifted by the gourd. Cost: $40
Origin: France
Construction: Briar
Notes: The first thought many have upon spying a churchwarden is “wizard pipe.” An extremely long stem is a common characteristic, typically paired with a small bowl. They can be a tad unwieldy due to their length. The churchwarden is the most popular with women and longer-haired smokers because it keeps smoke away from the face and hair. Due to the unusual stem length, the smoke comes out cooler. Cost: $225
Origin: USA
Construction: Briar
Notes: Also known as a Hungarian, Oom Paul (“Uncle Paul”) is named after Paul Kruger, the former president of South Africa. Kruger was in office from 1883 to 1900, and historically is rather divisive. Regardless, he popularized this shape of pipe. Oom Paul pipes work well for dangling due to their low center of gravity and are especially coveted by craftsman and others who work with their hands. Cost: $300
Origin: Turkey
Construction: Meerschaum
Notes: An ornate meerschaum is as much a work of art as it is a functional smoking vessel. Initially counterintuitive, the more plain an ornate meerschaum, the more expensive. This is because any flaws or imperfections in the material cannot easily be hidden with intricate design.