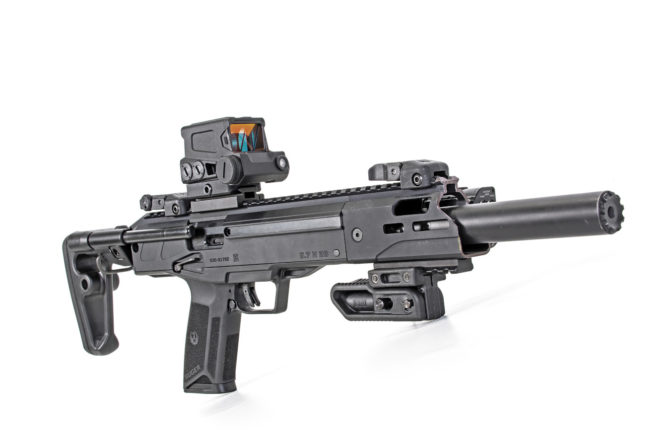 HK’s tiny PDW achieved iconic status through a combination of ubiquity in first-person shooter video games, as well as unavailability on the civilian market.

There’s a very real sense of wanting what you can’t have, and given the expense of converting the existing design to a semi auto version, the possibility that ATF wouldn’t allow it into the country anyway, and the limited number of units that could be sold, it’s highly unlikely we’ll ever see them on gun store shelves. Which doesn’t stop people (us included) jonesing for one.

Tommy Built Tactical has by all accounts crafted a few clones from MP7 parts kits, but even if you can find the scratch to pick one up, as a practical matter 4.6 ammo is a little thin on the ground. We’ve attempted to address the issue previously. In RECOIL Issue 44, Dave Merrill put together a poor man’s MP7 using a Kel-Tec CMR-30 in .22 Magnum as the base gun.

With Ruger recently introducing the LC carbine in 5.7×28, it begged for us to take another stab.

Ruger’s little LC carbine is based on architecture from their highly successful 57 pistol, using both the magazines and fire control components from it to create a rifle that loads from the pistol grip. Like the MP7, this creates a kind of “half bullpup,” going a long way toward reducing overall length — the 16-inch barreled carbine is just 29 inches front to back with the stock folded. The other factor contributing to its abbreviated dimensions is the use of a telescoping bolt.

First seen on the Czech Sa23 submachine gun and subsequently borrowed by Uziel Gal, this shifts a large portion of the bolt’s mass forward, wrapping it around the rear of the barrel — yes, the LC carbine is a straight blowback. There’s some pretty cunning engineering in the bolt design. To get it to work with a receiver that lacks a removable back plate, the bolt is made in two pieces dovetailed together.

To remove it, the rear section is plucked out, which then allows the recoil spring and front section to exit, leaving about 4 inches of barrel hanging out in space behind the trunnion.

The pistol-sourced fire control group and magwell are polymer, while the upper is carved from aluminum bar stock and has a continuous, full-length Picatinny rail with plenty of real estate for optics. Interestingly, in the 57 handgun, the frame is the serialized component, but it’s the upper which has been determined to be the firearm in the case of the carbine.

While it’s a good starting point for our project, it’s far from perfect. Although the handgun it’s based on looks striker fired, it’s actually a single-action design, begging the question of why the trigger pull is so god-awful.

There’s about 3/8 of an inch of take-up after the Glock-type trigger dingus is deactivated before you hit a wall, followed by another quarter inch of mushy pull as the sear slips, then another quarter inch of overtravel. Maybe we’ve been spoiled by shooting 1911s, Walthers, and Caniks these past few months, but honestly, in this day and age, there’s no need for a trigger to be this crap. Unless you’re Hi Point, in which case you get a pass.

Another shortcoming can also be traced to the single-action fire control group. An ambidextrous manual safety is fitted where you’d expect to find it on a 1911. While this works great on a handgun, it’s a little awkward on a carbine when your master hand is a lot closer to your face. Not an insurmountable problem, just a bit harder to work with than you might expect.

To legally create a short-barreled rifle, we first filed the necessary paperwork with the ATF (see RECOIL Issue 44 for the correct way to do this). Once right with the law, we then scurried over to our gunsmith to perform the necessary surgery. Due to spiral fluting on the barrel, where to cut was an easy decision — at 9 inches from the breech there’s a slight bulge in the profile that keeps us clear of any flutes and gives plenty of shoulder for suppressor mounting.

The handguard was cropped slightly longer than this in order to retain a couple of M-LOK slots, but we had no trouble screwing a 1-inch diameter Ruger Silent SR can inside the recess. Note that when launched, the Silent SR was rated for 5.7×28, but now, curiously that information is missing from the company’s website.

At first, we were concerned that a simple blowback action would have a significant amount of port pop. However, it seems that the amount of mass in the LC’s bolt is enough to ensure bore pressure is negligible before the empty case loses its grip on the chamber walls. While not as quiet as a piston gun, it’s nowhere near as bad as we anticipated, and chopping the barrel reduces dwell time further, increasing muzzle blast but decreasing any noise from the ejection port.

The folding, collapsible, AR-ish stock that comes with the gun is perfectly serviceable, if a bit rattly, though if you’re striving for true MP7 authenticity, you really need one that follows style rules laid down by the MP5.

Fortunately, Ruger saw fit to bestow the LC with a tail end that looks like it came out of SIG’s engineering department. A short, vertical Pic rail allows the end user to configure the gun with all kinds of aftermarket stocks, so it was to New Hampshire we turned when looking for a suitable replacement.

Unlike the USPS flat rate box in which it arrived, as it ships, it doesn’t fit. So we disassembled the collapsible stock from the MCX, set up on the mill, and whittled until it just slid past the sides of the LC’s receiver. At first, we were dubious as to whether the locking mechanism would survive having the majority of its bearing surface being turned into chips, but evidently, there’s plenty of redundancy in the system. Success.

In order to complete our PDW, we left the BUIS it came with installed but added a DI Optics USA RP-1. New to the U.S., but issued in large numbers in Korea, the RP-1 might look a lot like an EOTech XPS but is actually a red dot, rather than a holosight. The dot-plus-65-MOA-circle reticle is more crisp than we’ve ever seen (crispier? crispiest?) and should be a boon for anyone with astigmatism or who struggles with fuzzy, blurry aiming points. Think 4K versus 360p.

The full-on, MP7 experience would be incomplete without illumination and designation tools, so here’s where the wheels came off the budget, so to speak. We splurged on a SureFire XLV2, which is about twice as expensive as the carbine it mounts to, but offers both visible and IR lights and lasers in a compact package, in keeping with the LC.

At the range, we were able to sling five 40-grain V Max bullets into 2.5-inch groups on a regular basis, which might tighten up a bit if we were to mount a magnified optic in contravention to the ethos behind a PDW. Due to time constraints, we weren’t able to work up any handloads for the LC, but the limited amount of factory ammo we were able to scrounge up at a buck a round fed and ejected flawlessly, despite the shorter barrel.

Would we change anything? You betcha. The non-reciprocating charging handle sticks out far enough to snag clothing, bags, and vehicle seats, so future mods would include changing it to something sleeker, or perhaps modifying an L1A1 folding charging handle to fit.

The folding stock we stole from the MCX adds significantly to the overall length of the gun, so there’s a balance to be had between form and function — perhaps the original Ruger version isn’t such a bad option after all if you’re looking to keep things as short as possible.

And the trigger. It’s been a while since we’ve encountered a rifle so badly in need of a trigger job, so it’ll back onto the bench for surgery.

Overall, we’re pleased with the way this one turned out. If you’re looking to ape the functionality and style of the unobtainable HK, then Ruger provides a solid base from which to start. We believe everyone should be able to own an MP7, but for now, this will have to do.