SIG cracks the code on getting a super short-barreled rifle to run. RECOIL reviews the new SIG Rattler in .300 AAC Blackout.

Our cover gun this issue, the SIG Rattler, was born from a miscommunication. Allegedly.

According to company lore, a SIG representative, on a business trip to the place where Great Britain used to be, was asked by a certain Army unit what the shortest-barrel option was for the MCX, as they wanted something small enough to fit inside the glovebox of a BMW, while still chambered in a rifle caliber.

Due to a combination of jetlag, a strong British accent, and, no doubt, the Brit military propensity for attempting to drink everyone under the table, the rep believed his interlocutor to have referred to the 9mm MPX, which he said can indeed ship with a 4.5-inch tube in its most truncated form.

“Alrighty then!” proclaimed our transatlantic brother. “We’ll take a bunch of them. Oh, and it’s your round.” It wasn’t until his return to New Hampshire that the misunderstanding was realized, but by that time the engineering team had already accepted the challenge of making the world’s smallest select fire rifle.

Now, the preceding account may or may not be true, but why let the truth stand in the way of a good story? We’ll let you be the judge of its likelihood, but there’s not much point in incurring the development costs involved in chopping down the already petite MCX, unless there’s a real operational need from a legit end user. Going from a 9-inch to a 5.5-inch barrel requires more than just busting out the angle grinder and hacksaw. 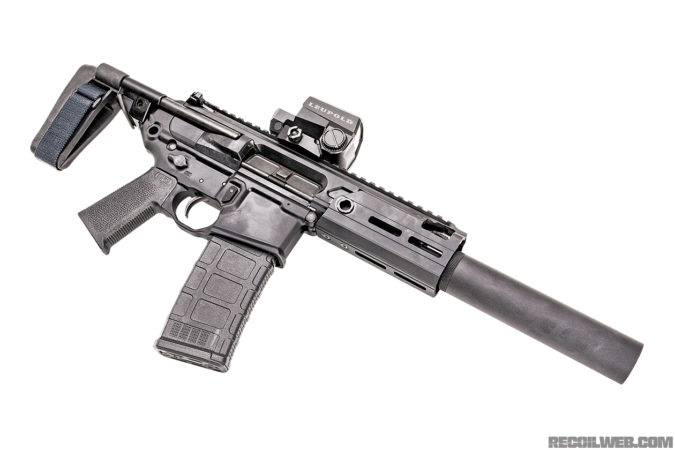 We attended the launch of the civilian version of the SIG Rattler last year, but we’ve instituted an editorial policy that no gun from a major manufacturer will be evaluated until it’s in final production format.

There are always problems in going from the limited run, handmade guns you’ll find at a media event to the version that ends up on the shelves of your local gun store.

While we appreciate the opportunity to get hands on as early as possible, it’s unusual for there not to be changes made between first showing and retail. You’ll find coverage of new product launches at RecoilWeb.com and RECOILtv, but we’ll reserve full reviews in print for the finished product.

In its current format, the Rattler is offered in two configurations, namely a factory SBR with folding stock and a pistol with a collapsible brace, both chambered in 300 Blackout. We requested the pistol version, as it’s transferable as a Title 1 firearm and can be carried across state lines without a, “Mother May I?” letter from the BATFE.

At last year’s launch event, SIG personnel indicated that the version spec’d across the pond would also be available, but thankfully, sanity has prevailed for the US market, and the 5.56 option is not currently cataloged.

We can’t think of a practical application of a 5.5-inch barreled 5.56 gun, unless the idea is to simultaneously deafen your opponent while setting him on fire. Then again, we’ve run a 12-inch .308 in three-gun competition this year, so perhaps they’re onto something. Pic rail and MLOK make the most out of limited accessory space.

The SIG Rattler is a short-stroke, piston-driven semiauto, feeding from familiar STANAG-pattern box magazines. Designed to offer better ballistic performance than a submachine gun, but from a smaller package, it features a two-position gas regulator for use with a suppressor, full-length M1919 top rail, and free-floating handguard.

The MCX platform on which the Rattler is based went through some pretty significant changes last year in order to reach a 20,000 round service life, and the tiny rifle benefited from most of them.

Taking cues from Knight’s Armament and their E3 bolt, the SIG part now has rounded, tapered lugs, rather than the original Stoner-pattern square numbers. This eliminates stress risers and largely prevents the familiar AR-15 failure point at the lugs closest to the extractor.

There’s an additional safety feature as well, in the form of a firing pin block actuated by the hammer, so if you’re in the habit of dropping your rifle muzzle down it’ll go clunk, rather than bang. Field stripping is very straightforward and should be second nature to anyone who’s ever maintained an AR. No need to strip BCG to this level for routine cleaning, as piston operation keeps it fairly clean.

Another significant advance was the adoption of a two-stage trigger, which felt very much like the excellent Geissele SSA. Unfortunately, this has not been carried over to the Rattler.

Our test gun has one of the worst GI-style bang switches we’ve encountered in the past few years; gritty, notchy, and breaking at around 9 pounds. It’s a real letdown on a gun that’s supposed to retail for almost 3 grand.

The Rattler does, however, retain its parent’s anti-wear features, such as replaceable, hardened steel cam track reinforcement and feed ramps, as well as steel pins where the charging handle latches make contact on the upper receiver.

The barrel is replaceable at the user level, retained by two Torx-headed cross bolts. Compared to an AR-15, there’s a definite feeling of solidity and longevity to the MCX upper, like it’s designed to last a couple of lifetime’s worth of hard use. Which it should, given the price difference.

The Rattler’s handguard locks into the upper by means of two grooves cut into the sides, below the Pic rail, and is secured in place by a lug captured by the front takedown pin.

It’s a neat system lending itself to swapping out components at will, if you’re prepared to live with a large gap in front of the gas block — other MCX handguards are designed around sensible-length barrels. One aspect of the handguard’s construction we didn’t much care for, however, was its inability to accept most non-SIG suppressors.

Its inside dimensions are just a hair smaller than the 1.5-inch outside diameter of many direct-thread cans, while the position of the barrel’s tapered shoulder means the suppressor has to enter the handguard in order to tighten.

One can we found to be a halfway decent option for those wanting to run subsonic ammo only was SilencerCo’s Osprey 45K, which when turned upside down looks like it was made for just this application.

While it’s hearing safe, it doesn’t have the kind of Hollywood-quiet levels of suppression you might expect from a 300 BLK, as the bore is sized for wider projectiles.

The question foremost in our mind when we headed to the range was what sort of performance compromise did we have to make in order to use this ridiculously small package.

Although 300 BLK was developed with short barrels in mind, the AR-15 wasn’t, and our perception of tiny rifles pretending to be pistols has been colored by experience with them. While it’s entirely possible to get 7.5-inch barreled direct impingement guns to work, it’s a case of not much, not often.

Short-stroke piston operation is another matter, and as SIG managed to get the 9mm MPX to run reliably using this system, we were hoping their engineering mojo had carried over to its big brother.

Bottom line up front: This isn’t a beginner’s gun.

There are certainly some firearms that the owner can shoot as a novice and will never outgrow. A suppressed 22LR, for example. Hell, for that matter, a good 22, whether it has a can or not. But there are others passed off as ideal for the new gun owner by idiots who have no business dispensing advice.

A good example of this would be anyone recommending a J-frame Smith to a novice female CCW candidate, a practice that reeks of condescension in the worst way.

The SIG Rattler falls into the latter category — it’s a specialist weapon developed for specific circumstances for a set of dudes who spend a lot of time practicing to shoot bad guys in the face at close range.

If you want a semiauto to serve in as many different scenarios as possible — the kind of gun that will always be a solid choice no matter if the job entails defending home and hearth, putting meat in the freezer, or going up against your buddies in a friendly competition at the range, then a 16-inch-barreled black rifle of whatever’s your favorite flavor will never be a bad choice. Thankfully, SIG steered clear of the temptation to thread the Rattler’s muzzle in some bastard metric thread pattern, unlike the MPX. This one takes 5/8×24 devices.

The Rattler is not that gun. That said, if you trust yourself not to place your support hand anywhere other than on the very limited amount of surface area immediately in front of the magwell, it’s a frickin’ riot.

You too can benefit from the engineering prowess of a major firearms manufacturer that was tasked with creating the smallest possible rifle for a tiny group whose lives depended on it. If you have a tendency to go full Costa on any long gun you shoulder, well that would be a self-correcting problem.

There’s quite literally no room for error, and should you make the mistake of grabbing the fore end just a teensy bit north of where you should, at minimum escaping gasses will tear meat from bone; otherwise, you’ll get that benefit, plus a .30 caliber hole where it shouldn’t be.

Now that we’ve been all paternal and responsible — oh, and get a hand stop, kids — how does it actually perform? Recoil is surprisingly soft. Ejection is to the 3 o’clock position when shooting supersonic rounds without a suppressor, and the low reciprocating mass doesn’t disturb the sight picture as much as you’d expect from a short-barreled AR. Two position gas piston throttles back carrier speed when dealing with a can. This Gemtech almost fits, but needs a shim set to avoid bottoming out on the handguard.

One of the metrics we use when assessing reliability in this caliber is whether the gun will run when unsuppressed and fed subsonic ammunition.

Without backpressure from a can, there’s usually insufficient gas volume and pressure to cycle the action, but in this case it seemed to work just fine. We did encounter a couple of failures to lock back the bolt on an empty magazine, but no failures to feed or eject were apparent.

It’s notable that despite the reduction in velocity from the short barrel, subsonic bullets were adequately stabilized.

Going to a 1-in-5 twist barrel (no, that’s not a misprint) spins the lanky heavyweights fast enough to keep them pointing the right way. Accuracy hovers around 3 MOA with factory ammo, a number we think could be improved upon, were it not for that god-awful trigger.

As a home-defense weapon, the SIG Rattler with a short, 300 BLK suppressor would be hard to beat. It’s short enough to easily maneuver around furniture, won’t blow out your eardrums should you have to use it indoors, has 30 problem solvers on hand, and delivers enough on-target energy to ensure problems stay solved.

It’s also a great option in its intended role that of a compact, “get the f*ck off me” gun for vehicle passengers in low-vis operations. It’ll never replace a 16-inch barreled carbine as a do-all rifle, but it’s surprisingly capable, despite the specialized niche for which it was designed.

To learn more about the SIG Rattler, visit SIG Sauer online at https://www.sigsauer.com/
Follow SIG on Facebook at https://www.facebook.com/SIGSAUERInc/